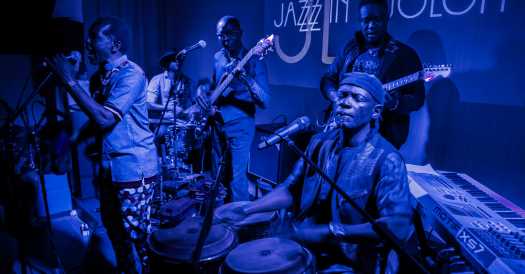 The westernmost point of continental Africa, Dakar is a cosmopolitan desert landscape that juts into the emerald Atlantic. With it’s brightly painted minibuses, wooden boats and a flair for colorful fashion, the capital of Senegal is a paradise of cool. Men waddle down the road in wetsuits pulled to their waists and surfboards tucked under their arms. Women in mermaid-like dresses hawk sandwiches stuffed with egg, French fries and lentils that rival meals sold from any hipster food cart in New York City. Rooftop bars and restaurants abound, and many seaside establishments feature tidal pools and beach chairs for sunbathing. With nearly six months of sunny days and sweater-weather evenings, this city is one of the more comfortable in the region. Senegal’s culture of hospitality, known as teranga, offers a welcoming vibe — don’t be surprised if you are beckoned over by locals to share a meal or a gritty cup of cafe touba, the local pepper-and-clove flavored brew.

Start your trip to one of the world’s hottest new surf spots with a dip in the ocean and a lesson from Ecole Surf Attitude. Private lessons come with a board and wetsuit, which you likely will need between December and May, and energetic instructors who will guide you through the choppy waves. Locations include the wide expanse of Yoff Beach or the waves off the tiny coastal island of Ngor, and vary depending on skill level, tides and wave forecast. Lessons start out with beachside stretching and a warm up. The course is great for beginners and even for young children, with patient instructors who will help steady the board to ensure you stand up and catch the buzz. Book in advance. A private lesson costs 25,000 West African C.F.A, or around $43.

Hose off at the outside shower at Chez Fatou seaside restaurant and settle in for aperitifs and bowls of peanuts, the country’s main cash crop, to watch how surfing is really done. The outdoor restaurant offers a perfect view of one of Dakar’s toughest breaks where wave-riders deftly navigate black jagged rocks poking from the water. The bartender makes a strong, gingery Moscow Mule for grown-ups and a virgin mojito that is a hit with children. As the cotton-candy-colored sunset spreads across the horizon, don’t forget to try bissap, a bright, purple local nectar made from hibiscus flowers, or a baobab smoothie called bouye. Specialty drinks with alcohol are 5,000 C.F.A. 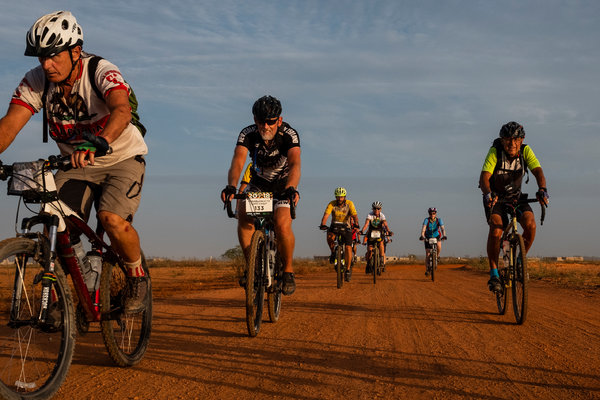 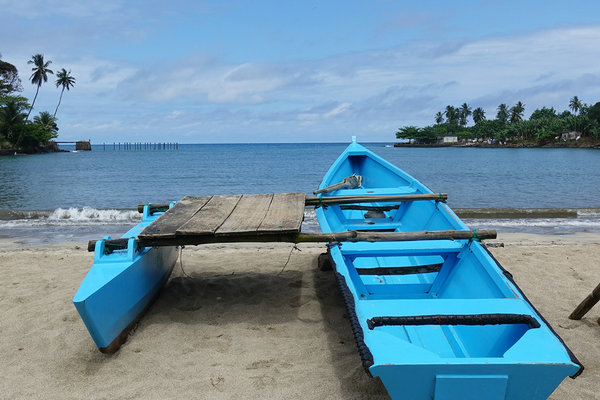 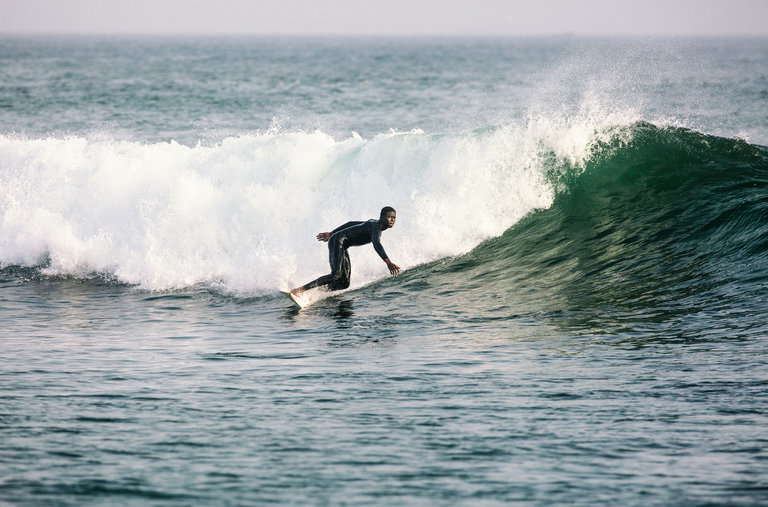 Before the sun dips all the way, ditch the kids and grab a taxi, plentiful anywhere here, and tell the driver to drop you at Magic Land. Once you’re in the parking lot and looking straight at the oddball amusement park, wander to the right between the buildings where you’ll reach a ramshackle beach. Vendors there sell some of the best catch on the continent. Point to the fish you want and it will be grilled on the spot. The thiof, a type of white grouper, is particularly delicious and served smothered in a tart onion sauce with fries and salad on the side. Darkness will fall as you’re seated at a plastic table on a rocky, and not particularly pristine, beach, but one with a marvelous view, and a few stray cats. A meal for two is about 15,000 C.F.A., but prices are negotiable. If a fancy meal suits you better, head next door to the restaurants of the luxury Terrou-Bi Hotel and dine on European fare with a few local dishes by the impressively lit infinity pool with the sea in the background.

If you want to dance with the locals, you’re going to have to stay up late. The dance party in Dakar doesn’t start until well after midnight in most clubs –—a fact made all the more impressive when you consider many Dakarois don’t drink alcohol. If you’re a night owl, head to Le Vogue, where you can lose yourself in a swirl of smoke from hookah pipes (called shisha here) until the crowds push onto the downstairs dance floor about 2 a.m. For an earlier night, swing by La Calebasse, a restaurant where the music often starts a couple of hours before midnight. There’s no cover charge for Le Vogue on Friday nights. 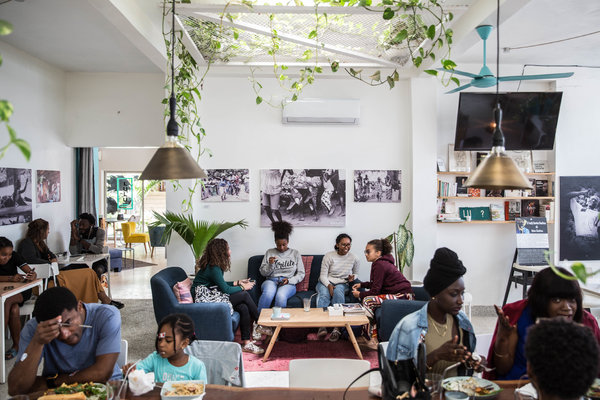 Lulu Café is one of only a handful of venues in the city that serves decent espresso drinks. The breakfast menu offers pastries, fruit and homemade yogurt or an omelet and potatoes with sautéed vegetables. A full breakfast is about 8,200 C.F.A. Browse the selection of books on display from Senegalese intellectuals such as Boubacar Boris Diop or wander into the attached design shop where local painters and artisans sell funky duffle bags, crafts, rugs, mirrors, side tables and furniture. The shop has a section of unique toys and furnishings covered in fun, colorful wax-print fabric to upgrade any child’s bedroom.

Head downtown to the continent’s newest and most impressive museum, the Museum of Black Civilizations. Set in a modern, new building constructed by the Chinese, the museum offers a wide selection of works, including tools from pre-modern times, and art and sculpture with postmodern themes. The collection can seem a bit haphazard, but the modern works, including photos and iron sculptures from West African artists honored during Dakar’s Biennnale, are not to be missed. Entry for adults is 2,000 C.F.A.; children's entry is 500 C.F.A.

Pop over to Le Lagon 1 for lunch. Intended to replicate the feel of being on a luxury boat in the middle of the ocean, the restaurant could serve as the setting for a sequel to The Life Aquatic With Steve Zissou. Set on a long dock, it’s stuffed with odd, 1970s-era sea gear. You’ll find shrimp, shellfish and other seafood galore on the menu, and can expect to pay about 9,400 C.F.A. for lunch. Bring a bathing suit to lounge on the private beach or rent a kayak nearby at the environmental organization, Oceanium.

Head to the Soumbédioune market, where you’ll weave between the fishermen and their pirogues to aisles of treasures: carvings and jewelry and paintings under glass (a local specialty). Pick up fabric to drop at a tailor for your own creation. Popular patterns involve birds, further sealing Dakar’s image as a global hipster capital to fans of meme culture (“put a bird on it”). You’ll have to haggle for everything here, but don’t pay more than 2,500 C.F.A. for an easily packable bird-print tote bag.

The boutique hotel Le Djoloff has a chalkboard menu that rotates each night, but often includes small, shareable plates of seafood or, on a recent night, a butternut squash sautee. You can order a Djoloff drink (a concoction of guava, ginger and bissap juice) for 3,000 C.F.A. A drink by the same name with alcohol, which involves lime juice, vodka, ginger and a mystery substance that turns the drink a neon blue color, costs 5,000 C.F.A. Pop downstairs to The Cave for a mellow night of jazz in a small, sit-down space. Reservations are recommended.

The Isle des Madeleines is a small national park island off the coast with emerald bays and rocky bluffs. A guide will tag along — no one is allowed on the island without one –—as you board a wooden boat, life vests provided. The island, with its few dwarf baobabs, is uninhabited. Trinkets, cash and milk are left as gifts for a genie said to live inside one baobab. Another octopus-like baobab looks like a monster sat on it. Tidal pools with starfish and translucent octopuses make for a magical children’s outing. Entrance fee is 1,000 C.F.A.; guide and pirogue are about 9,000 C.F.A. per group.

The Mamelles Lighthouse, a restaurant and club set at the base of a lighthouse, offers one of the best views of Dakar from on high. You can tour the inside of the lighthouse before a breakfast of bread and pastries, juice, eggs and fried potatoes. Hop in the restaurant’s van to get to the windswept top. Brunch selections range from 8,500 C.F.A. to 17,500 C.F.A. (Weekend dancing at the lighthouse starts after 10 p.m. and caters to an expat crowd.)

The ultra-modern Radisson Blu is attached to Dakar’s only shopping mall. The coastal location offers the opportunity for long walks or runs right out its front gate where throngs of locals jog each evening. Its large swimming pool is the perfect setting for an evening cocktail or two. Doubles start around 150,000 C.F.A. for weekend nights.

Airbnb quality can vary dramatically in Dakar with lots of unfulfilled promises, but a sure bet is a room at the lovely Loman Art House Villa. Spacious rooms spill out onto art-filled spaces and offer a gorgeous swimming pool wrapped in an intricate metal sculpture created by the artist who runs the villa. She may even let you use her huge and tastefully decorated kitchen to make your own meals. Rooms start at $75.

Dionne Searcey is the West Africa bureau chief. She joined The Times in 2014 as an economics writer, and previously worked at The Wall Street Journal. @dionnesearcey • Facebook