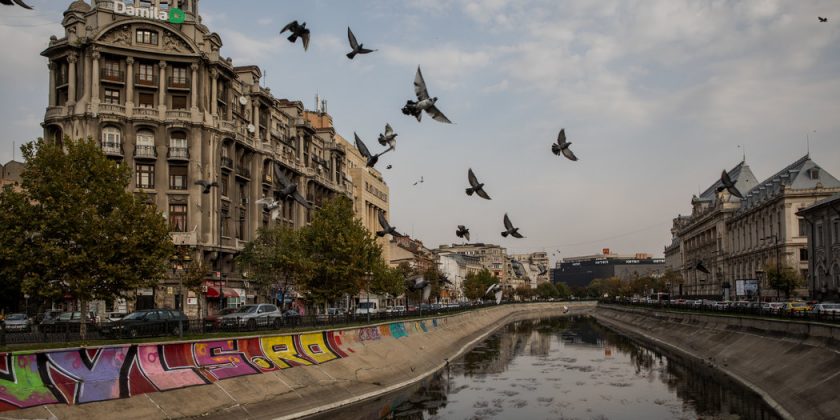 Bucharest is like cilantro, a Romanian resident once told me: You either love it or hate it. But there’s much to love about a city that provides a less-expensive taste of Europe (Romania is in the European Union but not in the eurozone). Still grappling with allegations of government corruption and working to rebound from layers of grim history, the present-day capital remains a bit rough around the edges, but offers a rich ethnic culture, a resurgent arts and crafts scene, beautiful parks and a booming night life.

Book in advance for a tour in English at the opulent Ceausescu Mansion, also known as the Spring Palace, which opened as a museum in 2016. A guide walks visitors through the villa where the head of state, Nicolae Ceausescu, and his wife, Elena, lived in relative luxury from 1965 until their execution by firing squad in 1989, after decades of social, political and economic repression. There’s a grand marble staircase, a glitzy bar, a private movie theater (“He liked to watch ‘Kojak’ but she preferred John Wayne,” our guide said), and a huge walk-in closet still displaying their dated designer clothing. Check out the private spa’s slimming machines and the lavish mosaics surrounding the indoor swimming pool, and remember the population that struggled to survive on rationed food and fuel. To join a group tour, entry is 50 lei, or around $12, a person. Free for war veterans and what the website calls “revolutionaries.”

Catapult back into this century with a drink and an appetizer at Paine si Vin, a casual, but sophisticated, outpost emphasizing natural ingredients from regional butchers and farmers. The wood-fired flatbread with toppings like blue cheese and mushrooms (32 lei), or salami and eggplant (28 lei) make a nice snack with a glass of Romanian Alira rosé (17 lei). Or two can make a meal out of the charcuterie board of “traditional tastes from local producers,” including Mangalita smoked ham, Plescoi mutton sausages, marinated olives, salty Transylvanian sheep’s milk cheese, honey mustard and crunchy veggies (72 lei).

Save room for the hearty dishes at Caru’ cu Bere (The Beer Wagon), a brewery and restaurant operating for more than a century under various management and now designated a historic monument on the fringe of the late-night Lipscani bar district. Yes, tour groups do come here, but so do Romanians. If you snag a table inside, be prepared for lots of dark wood and stained glass. In nice weather there’s a beer garden atmosphere as waiters carry heavy plates of sarmalute cu mamaliguta (meat-stuffed cabbage rolls, polenta and sour cream, 35 lei) and papanasi (fist-size homemade doughnuts with sweet cheese, sour cream and jam, 21 lei). Wash it all down with a stein of the house brew or a bottle of Bucharest-based Ursus beer (about 12 lei each or 105 lei for a bucket of 10). 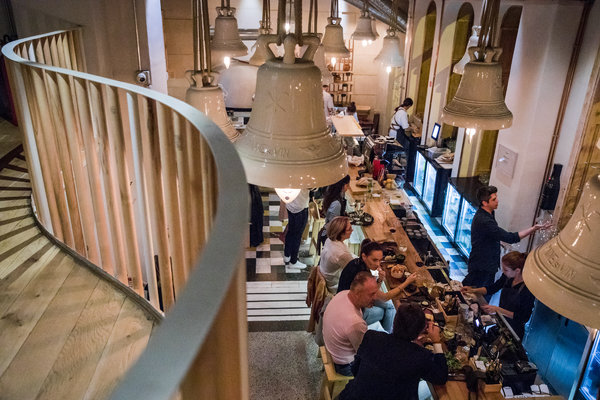 Some say that centuries of Italian influence on Bucharest survive in the form of its many coffee shops. Orrigo gets lots of press, but for a spot that’s also a co-working space and a fashionable concept store, try Beans & Dots in a refurbished former print shop in the charming Cismigiu neighborhood. Sit down with a cold brew and tonic water concoction (14 lei) made by a fashionably bearded barista, remind yourself you are not in Berlin, then browse the shop for silk scarves for 296 lei, or a chic, minimalist tunic by the Romanian designer Adelina Ivan, for 1,250 lei.

For more handcrafted items, take a short stroll over to the jewel-box Mesteshukar Butiq at 7 Edgar Quinet to browse a selection of contemporary housewares and sumptuous leather bags. The items in the shop are a collaboration between designers and Roma craftsmen and women, and are part of an effort to improve the economics of the community. Check out the pounded-copper earrings (88 lei), the array of copper bowls (350-450 lei), and leather-accented whisk brooms (22 lei).

Hop on the speedy and inexpensive subway to Obor for a whirl around the fruit, vegetable and housewares market where many a Bucharest home cook stocks up. Then join a picnic table of shoppers at the Terasa Obor beer garden for a paper plate of mici (grilled meatballs, at 2.5 lei each), a bread roll (. 5 lei) and a slather of spicy mustard.

Walk off lunch with a stroll around Cismigiu Gardens, or rent a bicycle and pedal along the park’s leafy paths, through hidden alcoves and over picturesque bridges to see busts of Romanian writers and a granite monument to the hundreds of American soldiers who died in Romania in World War II. Check out the enclosure of exotic peacocks and the haphazard pile of stone chess tables. If the rink has been installed, try some ice skating. In warmer weather, stop for an ice cream or cotton candy at one of the lakeside kiosks as people row past in rented boats.

A stretch of busy Calea Victoriei serves up the chance to sample several drinking holes with minimum effort. Start at Fabrica de Bere Buna at No. 91-93 to try the craft-beer maker’s own Zaganu brand (12 to 14 lei) or a flight of microbrews with names like Immigrant and Sencha by a mix of independent Romanian breweries. (Four smaller servings arrive nestled into a wooden board for 29 lei.) Segue a bit north to the harder-to-find Gradina Eden (Garden of Eden): Enter the gates to the stately mansion at No. 107 and follow the path to the right to find a woodsy space festooned with lights and bars serving cocktails, smoothies and imported beers. In the mood for more? Exit and (carefully) cross the avenue to Green Hours, a chill bar-bistro-live performance space. If wine is more your thing, head up to No. 155 and the Vinexpert Wine Bistro to investigate native grapes like Cramposie Selectionata and Feteasca Neagra (9-15 lei a glass).

The Romanian Athenaeum is the landmark home of the George Enescu Philharmonic Orchestra, named for the homegrown composer. It is a stunning neoclassical structure in which to enjoy live music. The ornate lobby, with its marble columns and twisting staircases, leads to a lush, domed auditorium with seating for about 650 and decorated with a colorful timeline fresco detailing the country’s history. Pick up tickets at the tiny box office before entering through the main front door. While concerts are usually classical, there have been exceptions, including a recent tribute to Michael Jackson (around 30 to 70 lei).

There is art on the wall — and on the plate — at The Artist, a white-tablecloth, fine-dining space inside a rustic villa. Romanian-influenced modern cuisine seems to be the goal of Chef Paul Oppenkamp, who is from the Netherlands but has lived here since 2012. His website uses words like “emotional” and “playful” to describe his dishes, which helps to explain items like elderflower, tea-cured salmon with vodka and lime jellies. His tasting menus are served in individual spoons, and his dessert of cucumber sorbet involves a scoop added tableside to a marble mortar in which you’ve used a pestle to crush basil, mint and rose petals. “Spoon” tasting menus cost about 55 lei for appetizers, 76 lei for mains and 38 lei for desserts. There is an extensive Romanian wine list.)

How to see other parts of Romania without leaving the capital? The Village Museum in Herastrau Park showcases more than 270 houses, churches and farm buildings transported from around the country. The architecture-themed, open-air ethnographic museum combines the quirky and the quaint, allowing visitors to step into the past and inside many of the largely wooden structures, including an 1860 “Hebrew Homestead,” where a sheep farmer and his family in the Maramures region once lived. In keeping with the nature theme, the trash bins are baskets of woven vines. In an area called the New Village, there are places to sit and snack and a stage for multicultural programs like Thai dancing. Adult entrance costs 15 lei. Free for preschoolers, veterans and the disabled.

One subway stop south is the Romanian Peasant Museum. Although the main building, with its collection of textiles, ceramic and icons, is closed — and expected to reopen in February after a lengthy renovation — the Peasant’s Club cafe-restaurant and the Peasant Art Gallery gift shop remained open and are good places to snag lunch and browse through the vintage textiles and handcrafted souvenirs, including woven wool carpets (prices vary by size) and carved wooden spoons (around 25 to 50 lei). Outside, check out the colorful Communist-era mosaic hailing the working class that stretches across the rear facade, and the 18th-century church in the backyard. 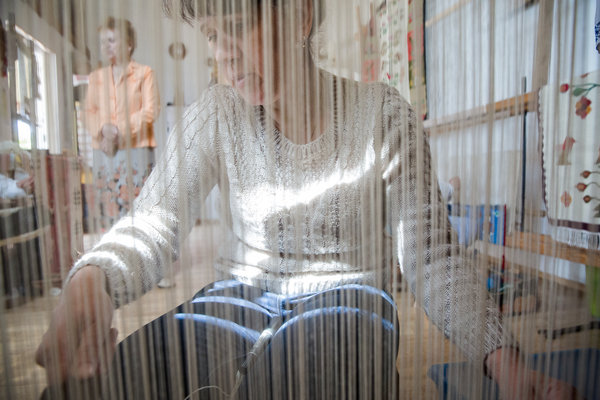 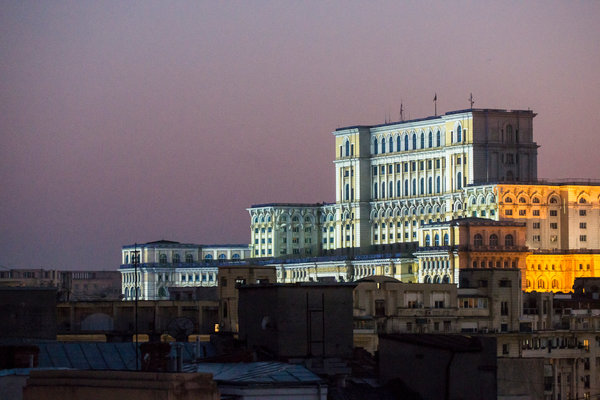 The newly chic Gradina Icoanei area offers a range of studio and one-bedroom apartments on rental sites, including Airbnb, starting from around $35 a night. Prices around Cismigiu, with its array of trendy coffee houses and greenery, tend to rise to a base of $45 to $55.

Romania’s first skyscraper, the 257-room InterContinental Bucharest (4 Bulevardul Nicolae Balcescu), opened in 1971, towering over University Square, a location convenient for walking or taking the subway to many sites. All the rooms have balconies, which is one reason it was favored by the foreign press corps that gathered in 1989 to watch the unfolding revolution against the Ceausescu regime. The décor still feels like a pleasant relic of the 70s with a few updates: My room had a king-size bed, an espresso machine, a marble-tiled bathroom with a full-size tub and French L’Occitane toiletries. There’s an indoor pool and sauna on the 22nd floor. The breakfast buffet was impressive, even at an extra 25 euros, or about $28. Rooms from about 95 euros.

The Mansion Boutique Hotel (11 Franceza Street) is deep in Bucharest’s Old Town and is a bit challenging to find along a busy street of crowded cafes and loud bars. Each of its 19 rooms has a different theme: Art Deco, Industrial, Ottoman, etc. Interior courtyard windows blocked out street noise. No elevator. Buffet breakfast for 10 euros. Rooms from about $110.

At Hotel Cismigiu (Boulevard Queen Elisabeth 38) you get an entire apartment, not just a room. What the modern neutral décor inside the stately Art Nouveau building lacks in personality, it makes up for in space, with an open-plan kitchen, and a dining and sitting area. Ask for a quieter interior courtyard room. Rooms from about $110, including breakfast.

Susanne Fowler was an editor in the London and Paris offices of The New York Times.