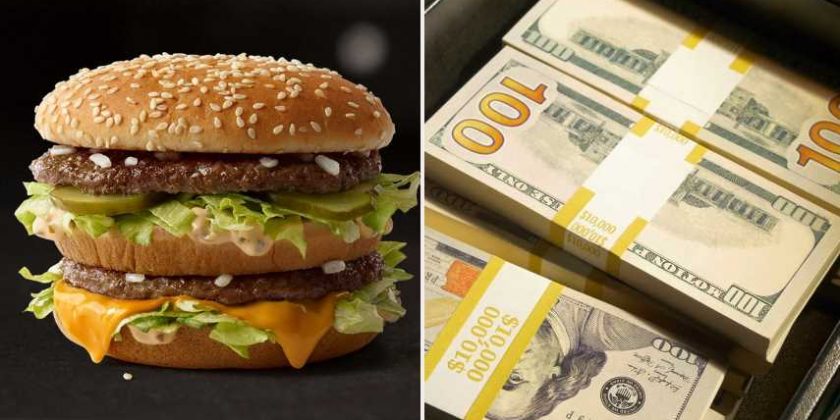 Yes, the Big Mac index is actually a thing, guiding curious people as to the cost of McDonald’s most famous hamburger, the Big Mac, from around the world.

But it does much more. Invented by The Economist in 1986, the idea behind the Big Mac Index, also referred to as Burgernomics, is that it serves as a “lighthearted guide” to determine the cost of living in different countries. As silly as it sounds, Burgernomics can actually provide some really useful insight as to which currencies are being over- or under-valued.

RELATED: Investigation Reveals McDonald’s Touch Screens Could Have Poo On Them

In any case, have you ever wondered how much a Big Mac costs in other countries?

Here’s a look at the 10 most expensive countries to buy a Big Mac and just how much you’ll have to fork over for a little taste of home. (The results, based on data from Statista as of January 2019, are quoted in U.S. dollars.)

Yep, mate. If you want to sink your teeth into a Big Mac down under, it’ll cost you as much as a Starbucks venti latte with soy milk and a caramel flavor shot. It’s described as containing two 100% Aussie beef patties, along with all of the things you’d expect on a Big Mac, including crisp iceberg lettuce, cheese, onions, and pickles. Of course, this is all served between a toasted sesame seed bun.

The Double Big Mac was discontinued there and replaced with the Grand Big Mac that uses larger 1/3 lb. patties. In 2017, the country also released the Big Mac BLT as a promotional item.

Why on earth would a Big Mac cost so much in Brazil, especially considering that it barely cost $1.50 in the early ‘00s? It’s unclear, but it could be a combination of economics, exchange, and the fact that McDonald’s is considered a tourist destination, or luxury item in a country where citizens are far more inclined to chow down on things like rice and beans versus burgers.

Also on the menu there, should you wish to opt for something different, is the Cheddar McMelt which adds creamy cheddar cheese, grilled onions, and soy sauce to a beef burger on a whole-wheat bun; banana-flavored pies; and a vegetarian burger option.

During Passover, when Jewish people abstain from eating bread, supposedly McDonald’s restaurants in Israel serve burgers on lettuce or matzo instead of buns. Chances are, however, that you won’t get a discount on your Mc-expensive Big Mac.

RELATED: 25 McDonald’s Toys That Are Actually Worth Something Today

That said, the meat will be 100% kosher, cooked on charcoal instead of fried. (You can still, however, get cheeseburgers in most locations.) If you prefer to spend your hard-earned almost $5 on something else, consider changing it up and grabbing something from the menu you won’t find elsewhere, like the McKebab or McShawarma.

If reports from 2014 that McDonald’s employees get paid $20/hr. and are unionized are true, then it’s no surprise that Denmark has the 7th highest price for the Big Mac. To put this in perspective, that’s about twice what McDonald’s staff get paid in the U.S.

And, by the way, as per this list, the Big Mac is actually more expensive in the U.S. then it is in Denmark. Really, is anyone all that surprised? Either way, pretty expensive for a Big Mac.

In most European countries, you’ll spend about $4.50 for a Big Mac, or you can save a few cents by opting for the smaller Big Mac Jr, one of the newest items in celebration of the company’s 50th anniversary. Or, conversely, sink your teeth into a Grand Mac, a super-sized version of the iconic burger.

In spots like London, expect to pay even more for your Mc-meal. Each European country has some unique variations on the menu should a Big Mac not suit your fancy, including the Croque McDo in Belgium with Emmental cheese and ham toasted between two buns; the chicken salsa cheeseburger in Denmark; and Croque McDo donuts in France.

Up north in Canada, a Big Mac will cost you more than a fiver, if you can believe it. Most residents will buy one as part of a combo that includes a drink and French fries (or poutine). Add some crispy bacon (no, they don’t serve “Canadian” back bacon, just strips) but don’t forget the special sauce.

Then, wash it down by grabbing a Tim Horton’s coffee (double, double) and donut from down the street. What a great meal, eh?

The cost of a Big Mac in the U.S. is pretty much the same as in Canada, as are the buying habits, except scratch the poutine and replace Tim Horton’s with Dunkin’ Donuts.

RELATED: All McDonald’s Fries Are Not The Same

All jokes aside, Americans can pick and choose from over 15,000 McDonald’s restaurants spread all across the country. Unsurprisingly, every last one of them will serve you a Big Mac, first known as the Big Attraction, for about $5.60.

Can you believe that it will cost you $6 – more than an entire Happy Meal – to grab a Big Mac in Sweden? If that doesn’t encourage you to skip the fast food and eat healthier, I don’t know what would!

Indeed, if health nuts prefer something less calorie-heavy but more substantial than a salad, an alternative to the expensive Big Mac is the McVegan, which includes cannellini and kidney beans, onions, carrots, green peppers, and tomatoes served on a lettuce bun. For ski bums, they can stop in at a McSki drive-thru (for real) and grab a bite before heading back out on the slopes.

At least you’ll get some change back from a $10 bill; however, in Norway, which reportedly has one of the most overvalued currencies in the world, you’ll pay the equivalent of almost $6 for a juicy, meaty Big Mac.

If you’re looking for more originality for your buck, some other McDonald’s menu items you can get there include the El Maco, a burger that comes with salsa and sour cream, paired with barbecue spice fries; or, the Laksewrap that includes deep-fried fish, salad, and a mango slice in a tortilla.

Claiming the top prize for the most expensive Big Mac in the world, the burger is likely no different than it is anywhere else. With Switzerland being an overall expensive country to live in, with a high standard of living, one would come to expect that even a Big Mac will set you back a pretty penny.

Residents supposedly get paid reasonably well, so it’s all relative – they can afford it. Nevertheless, if you’re visiting and feel like a cheap bite, a Big Mac might not be the affordable option you think it is.