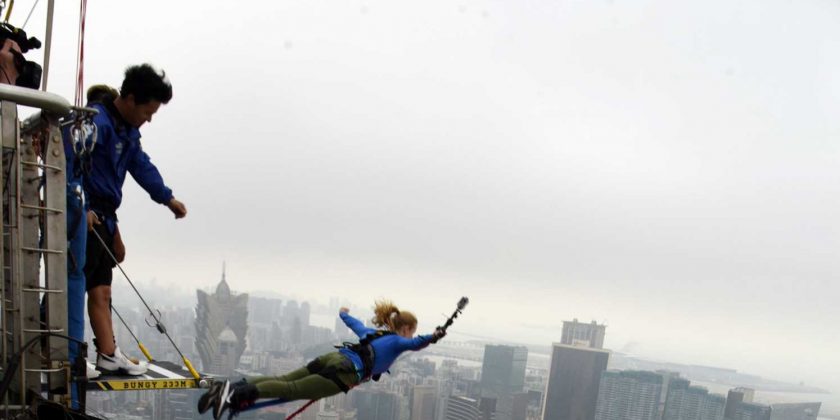 You don’t have to be a superjock or a reality show contestant to have an extreme travel adventure. Ordinary people can have incredible experiences – like bungee jumping, high-speed ziplining and dune buggying – if they know where to go, says Darley Newman, host and producer of the PBS and Amazon Prime TV series “Travels with Darley.”

“People can go out and try something wild and unique. You’ll be getting out of your comfort zone, and it’s totally brag-worthy.”

Speed demons can strap in Superman-style and reach speeds of more than 100 mph on what has been described as Europe’s longest and fastest zipline in Bethesda, Wales. (Photo: Darley Newman/DCNCreative.com)

Speed demons can strap in Superman-style and reach speeds of more than 100 mph on what has been described the longest and fastest zipline in Europe. “You’re just flying on this one. The sides of your face get pulled backwards.” Located in the Snowdonia Mountains in Bethesda, Wales, the line drops at a 20 percent grade as riders soar above an open quarry.

Expect the sand to fly when you get behind the wheel in this California state park that allows vehicles to drive on the beach. A local company rents buggies to explore the Oceano Dunes State Vehicular Recreation Area, where mountains of sand tower as high as 80 feet.

“It’s a wild experience. You feel like you’re on another planet. Anyone can do it if they have a license,” Newman says.

With swinging ladders, a log bridge and a trapeze, the ropes course at C Lazy U dude ranch resembles a “ninja training” camp. (Photo: Darley Newman/DCNCreative.com)

With its swinging ladders, a log bridge and a trapeze, the ropes course at C Lazy U, a  Colorado dude ranch, should be classified as “ninja training,” Newman says. “It feels like ‘Game of Thrones.’ You’re doing all kinds of crazy things.”

Most memorable is the aptly-named “Leap of Faith,” requiring participants to jump off a 30-foot pole and grab a swing.

Newman took a giant plunge when she threw herself off the 61-story Macau Tower with a bungee cord attached to her body.

“The jump is really dramatic. You’re in an urban environment and there’s concrete all around you.” And while the leap was terrifying, it ended with a gentle bounce at the end. “That’s really the fun part.”

Some of the country’s most challenging rapids churn through West Virginia’s Gauley River every September. (Photo: Darley Newman/DCNCreative.com)

Some of the country’s most intense rapids churn on West Virginia’s Gauley River every fall. Newman recalls one intense section ending with a waterfall drop that her guide called the best 18 seconds in whitewater  “You don’t have to have experience, but you need to be a good listener. It’s a really, really fun day. The scenery is gorgeous, and it’s intense.”

6. Drive on a NASCAR track at Watkins Glen, New York

Owning a race car isn’t a requirement for driving on a legitimate NASCAR track. At Watkins Glen International in upstate New York, visitors can put their personal vehicle through its paces, zipping around the 3.4-mile course.

Drivers follow behind a track vehicle, which keeps them from going too fast and losing control on the banked curves. “It’s pretty exhilarating just keeping up with the pace car,” Newman says.

There’s no need to head into the wilderness to test your rock-climbing skills. Newman reached new heights above a Reno parking lot when she ascended a 164-foot course outside a hotel, which claims to have the world’s highest artificial climbing wall.

“It’s quite an experience,” she says. “The trick is you really use your legs instead of your upper body.”

8. Bike through the high desert in Santa Fe, New Mexico

Newman saw a different side of northern New Mexico when she cycled through the high desert on the annual Santa Fe Century bike ride. Participants have plenty of options from a 25-mile route to a lung-busting 100-mile course.

“You’re riding on an historic trail and you’re riding through historic villages,” Newman says. While the event’s held in May, visitors can pedal the city’s 16-mile rail trail from spring to fall.

One of the last things you’d expect to see in the summer on the Great Plains is ice. And that’s what makes this hike in the Little Missouri National Grassland so memorable, Newman says.

“It’s a quirky natural phenomenon, and it’s a cool way to cool off.”

It’s not the relatively modest waves that make that makes surfing in Dubai so memorable. It’s the setting. (Photo: Darley Newman/DCNCreative.com)

It’s not the relatively modest waves that make this experience so memorable, it’s the setting. A local company rents gear and offers surfing lessons, giving visitors a chance to hang ten in the shadows of the of Burj Al Arab, one of the world’s tallest and most luxurious hotels. It’s an unexpected local experience, Newman says. “You’ll meet Dubai’s truly international and tight-knit surf community.”