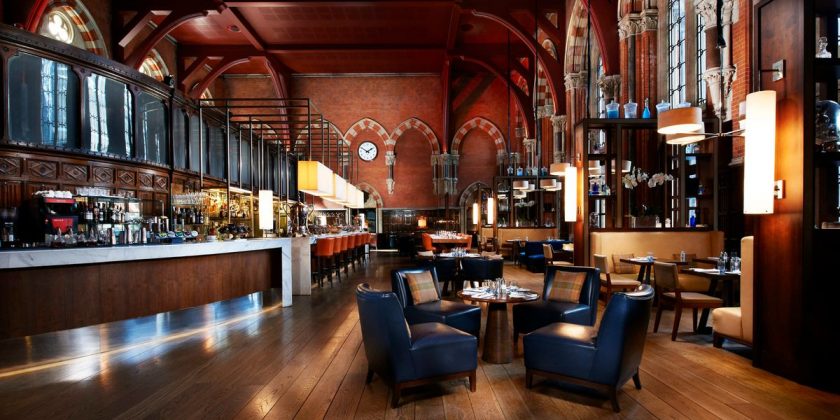 Back in Victorian times, refreshment rooms and bars proved to be the heart of railway stations.

Nowadays most people rarely stop off for a drink or bite before travelling – but thanks to a group of passionate entrepreneurs and railway enthusiasts, these establishments are experiencing a major comeback.

Think everything from cosy bars with plush seating to elegant ballrooms that have been transformed into pubs.

Then there are the drinks menus where you’ll find everything from classic cocktails to craft beers and soft drinks to hydrate before your journey.

Mirror Travel turned to rail expert Kate Andrews, co-founder of train tickets search engine Loco2.com, to get the lowdown on her favourite spots across the UK for a trackside drink.

Check out her top picks below…

This bar on Platform 1b is an immaculate restoration job. Simple and elegant, it has many of the original features of its former existence as the Edwardian Refreshment Room & Dining Rooms, and every bit of the charm.

The owners thought it would be a tragedy to fill this traditional space with a familiar big brand. Instead, it’s a free house, sourcing the best beers from across the world as well as making them at the on-site microbrewery.

Affectionately referred to as the “Sheffield Trap”, plenty have accidentally stayed here far longer than planned.

Find out more at sheffieldtap.com .

Lots of stations have uninspiring chain pubs attached – good for cheap beer, but lacking in atmosphere.

One exception is the impressive Hamilton Hall at Liverpool Street – named after Lord Claud Hamilton, chairman of the Great Eastern Railway Company which built the station in the 1880s.

This JD Wetherspoon is set in the splendid surroundings of the former ballroom of the old Great Eastern Hotel.

The hotel itself was built on the site of England’s first psychiatric hospital – the famous Bethlem Royal Hospital, aka Bedlam. Given that it’s a favourite of thirsty commuting City workers, it seems appropriate that the pub – currently undergoing a refurb – is sometimes pretty lively.

Find out more at jdwetherspoon.com .

At 1,339ft above sea level, Corrour is the highest train station in the UK and one of the most remote – a stop on the line between Glasgow Queen Street and Fort William and Mallaig.

Set on the edge of Rannoch Moor, there’s no road to this pub, you can only arrive by train or a 20-mile hike.

But don’t worry if you have one too many. There are beds close by at the B&B in the former signal box.

Find out more at corrour-station-house-restaurant.co.uk .

A bar with a bizarre history. Built as an opulent lounge for first-class passengers in the 1890s, just 70 years later it was being used by the British Transport Police as holding cells.

The building languished under layers of concrete for decades before being brought back to life in 2000.

The owners are great fans of Newcastle United, so there are plenty of TV screens there to catch the football while on your travels.

Give match day a miss if that’s not your thing.

Find out more at centurion-newcastle.com .

An obvious stop on any train enthusiast’s visit to this fine city, which is the home of the National Railway Museum.

The bar – a sister to the Sheffield Tap – is a revamp of the former station tea rooms, now lovingly restored to their previous glory.

Snuggled next to Platforms 2 and 4, it’s full of character and retains a friendly, local atmosphere, serving up a fine range of beers, craft ales and pork pies. What more could you ask for at the end of a long journey?

Between the two ‘Traps’ it’s a wonder anyone ever makes a train between Sheffield and York.

Find out more at yorktap.com .

What was once a busy ticket hall is now probably the fanciest station bar in the country.

Part of the five-star St Pancras Renaissance Hotel, this place oozes history and is an impressive reminder of when train travel was a genuine luxury.

The inspiring but pricey cocktail menu (from £12) means this isn’t a place for a swift half before hopping on a train up north.

But it’s a great place to linger before a glamorous trip to the continent.

Find out more at marriott.com .

A small, friendly pub on Platform 4, it’s part of the Transpennine Real Ale Trail that featured in TV shows such as Michael Portillo’s Great British Railway Journeys and Oz And James Drink To Britain.

Dating from 1885, this Victorian boozer still has the original marble bar, ornate ceiling and open fire.

Enjoy a pie, peas and pint while browsing the intriguing collection of original railway paraphernalia.

Find out more at beerhouses.co.uk .

On the famous West Highland Line that links the ports of Mallaig and Oban to Glasgow, it’s got a great range of malt whiskies, a huge selection of Scottish artisan gins and a glowing recommendation as a cosy bar with great food and superb service (it closes for winter and will reopen on March 24).

Commandos in WWII started their training here with a seven-mile march to ‘Castle Commando’ at the Achnacarry estate.

Like Corrour, Spean Bridge is another good reason to visit this amazing part of Scotland.

And with planning, you could combine the two by rail – it’s only a 33-minute trip.

Find out more at oldstationrestaurant.co.uk .

With hanging baskets in summer and real log fires in winter, this is an unpretentious recreation of a proper train station buffet.

On one side there’s a bistro bar modelled on a waiting room, serving tea, cake, wine and beers.

If you’re hanging around for a connection, head to the delightful railway carriage restaurant where First Class seats and overhead luggage racks create a nostalgic atmosphere.

Find out more at station-bistro-wymondham.co.uk .

PS: Impress the locals by knowing that Wymondham is pronounced Wind-ham, not Why-mond-ham!

Serving real ale from the local Holden brewery in Dudley, as well as a couple of guest pumps, Codsall Station is a great place to call by for a pint on your travels in the Midlands.

In the old stationmaster’s house and waiting room, it’s a beautifully converted red-brick building with an airy conservatory and outdoor tables overlooking the platform.

Don’t worry about noise from passing trains though – there’s only one train an hour in each direction on this stretch of the London Midland line between Birmingham and Shrewsbury. The burgers are, of course, bostin’.

Find out more at holdenscodsallstation.co.uk .