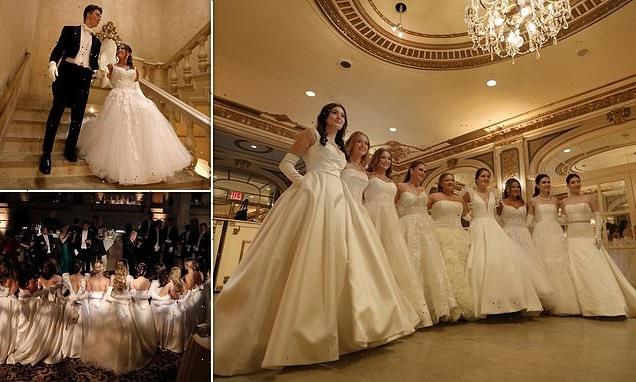 Putting on the glitz! High society families splash out more than $20k on the entry fee for their daughters to don dazzling gowns at the 68th International Debutante Ball in New York

Young women from around the world put on a dazzling display last night as they attended the 68th International Debutante Ball at the Plaza Hotel in New York.

The event, which has been described as ‘patriotic’ and a ‘traditional family occasion’, is a mainstay of the city’s social scene and considered one of the most prestigious events of its kind.

And attendance does not come cheap, with the entry fee for previous years reportedly exceeding $20,000, and debutantes also having to splash out on expensive frocks from designers including Vera Wang, jewellery, and hair and make-up. 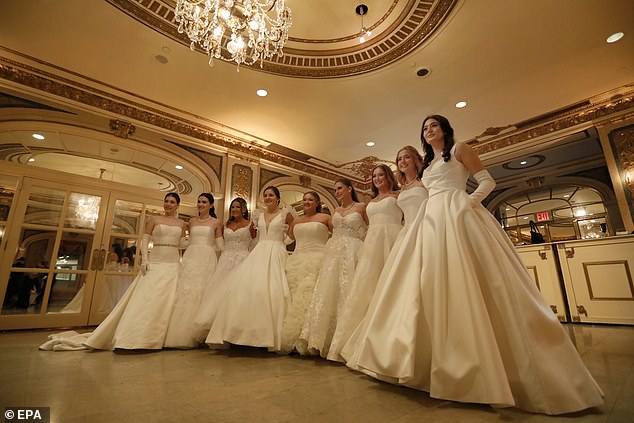 Among them were Arabella Francesca Pierson Sainty representing England, as well as Sophie Drummond-Herdman and Violet Drummond of Megginch of Scotland alongside others.

Donning dazzling white gowns, they made their society debut in style, adding white gloves and sparkling jewels to their outfits for a touch of bling. Only the debutantes are permitted to sport white for the evening.

They were each accompanied by an escort, who were all smartly decked out in full evening dress – black tail coat, black trousers, white shirt with pique front, white pique vest, white tie and white gloves.

Escorts can be a brother, family member or close family friend around her age, or the committee can assign escorts. 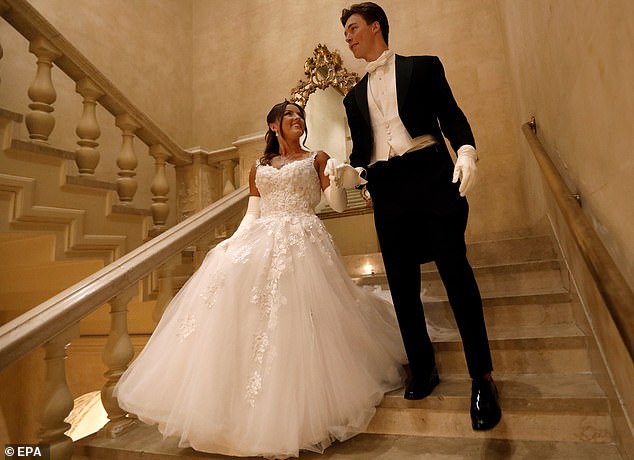 Each debutante was accompanied by an escort in white tie and tails at last night’s New York event (pictured L-R: Maria Knasel from Naples, Florida and Jacob Poling from Mercer Island, Washington) 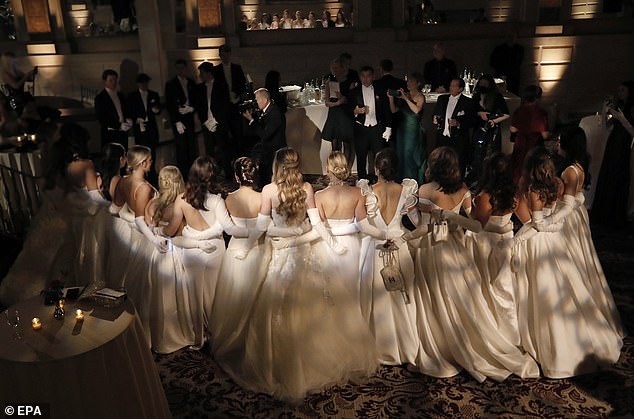 Debutantes from 75 countries have attended the ball since it was founded in 1954 (pictured: young women at last night’s event at the New York Plaza)

The dress code for their fathers is the same, with full evening dress required, though no white gloves.

According to the International Debutante organisation, last night’s evening began with the receiving line in the Terrace Room Balcony.

Here, the debutantes met with guests, while photos were snapped both candidly and for the press.

After the receiving lines, attendees moved into the Plaza’s Terrace Room, where they enjoyed cocktails. 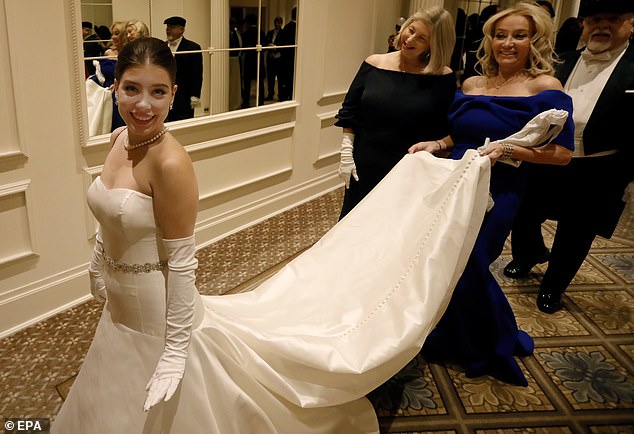 Dazzling white gowns and gloves were the dress code of the day, with attendees donning glitzy frocks for their debut 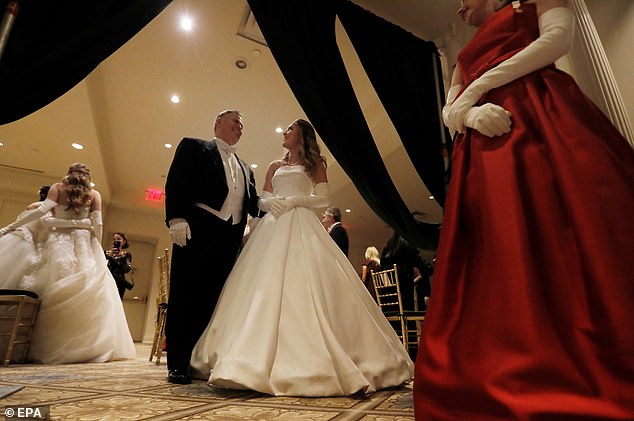 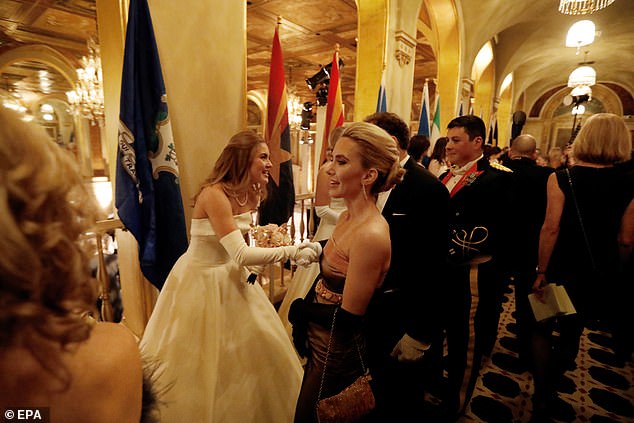 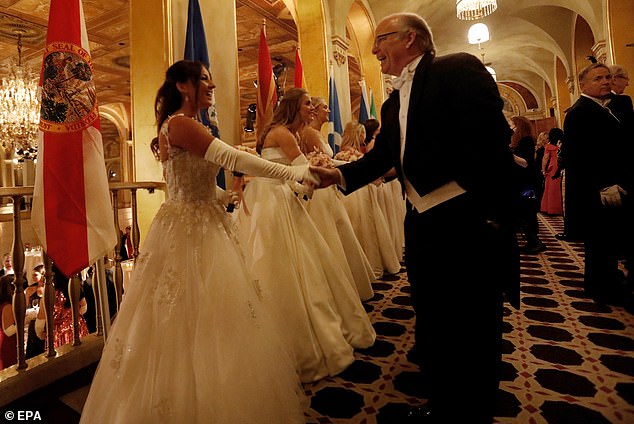 Debutantes greet guests at the beginning of the ball. After the receiving lines, attendees moved onto cocktails, before dinner and dancing 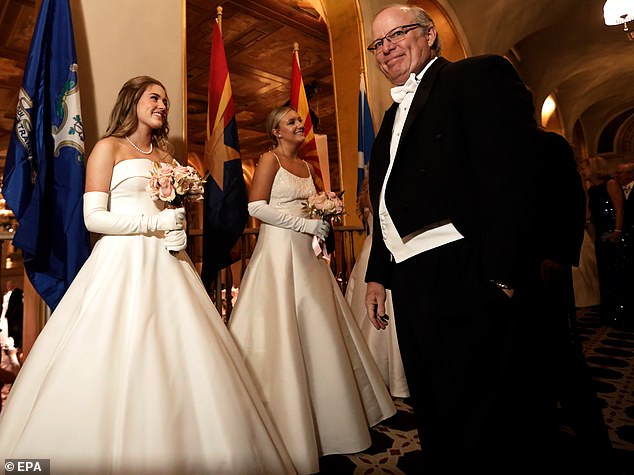 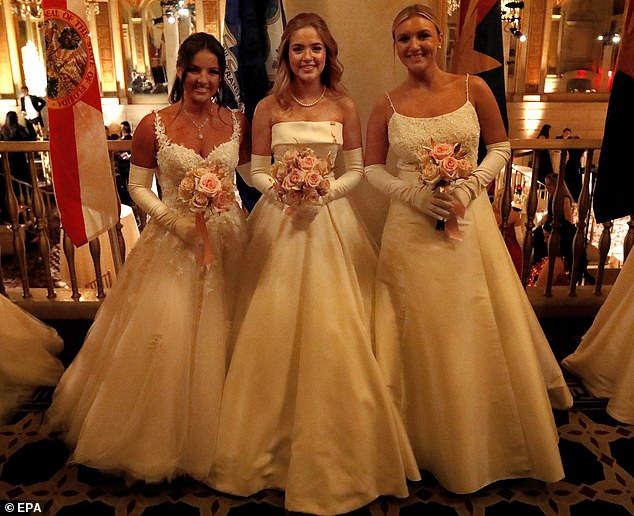 Then, after dinner and dancing, the debutantes were presented, one at a time, accompanied by their escorts, as well as orchestral music chosen to represent the country or state they represented.

Founded in 1954 by Beatrice Dinsmore Joyce, the ball has welcomed debutantes from 75 countries over the years.

The majority of attendees hail from the US, with France, England, Italy and Germany then being represented most frequently.

Among the high society guests to have graced the ball are daughters and granddaughters of United States Presidents and United States representatives. 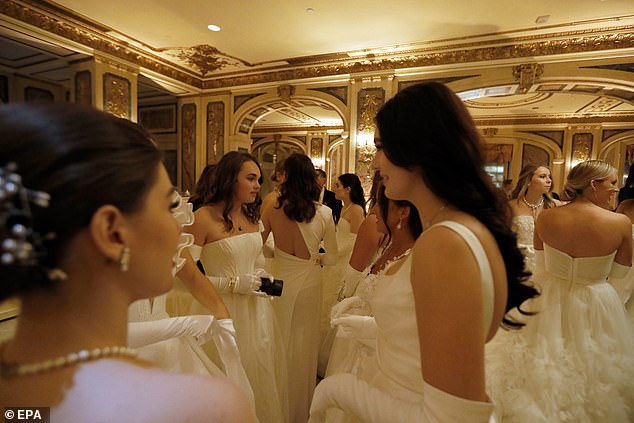 Excitement: the event has been described as an exciting social setting in which young women and men from all over the world meet one another 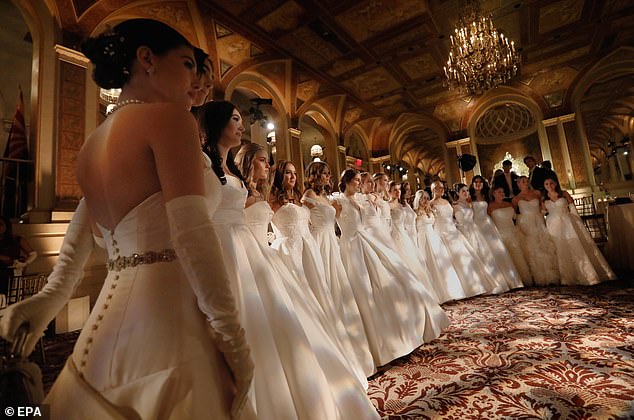 The International Debutante Ball, which sees the young women being ‘presented’ to high society, is considered a major event in the New York social calendar 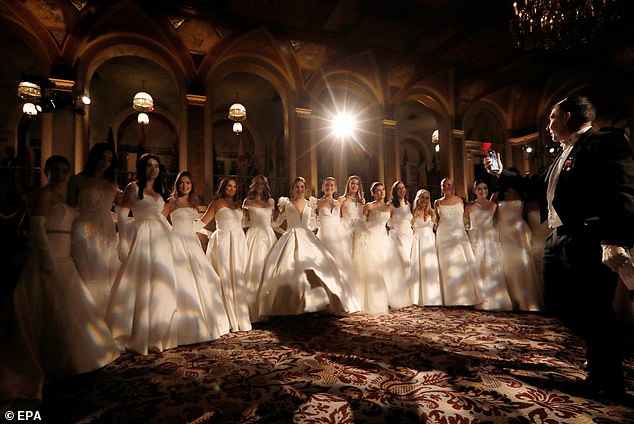 Candid: one of the debutante’s fathers is snapped taking a photo of the glamorous attendees on his mobile phone 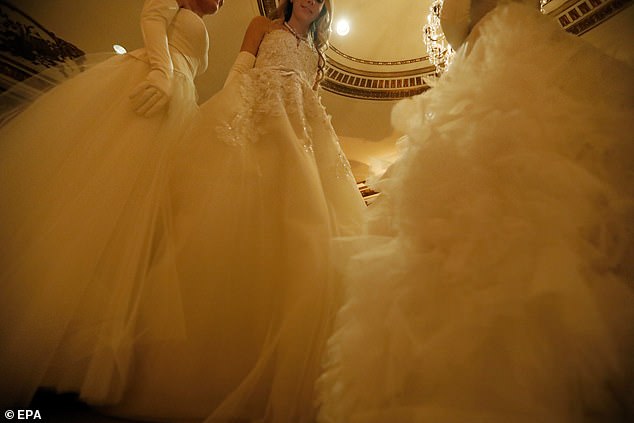 Dazzling: the debutantes wear white for the event, and are the only attendees allowed to don the colour 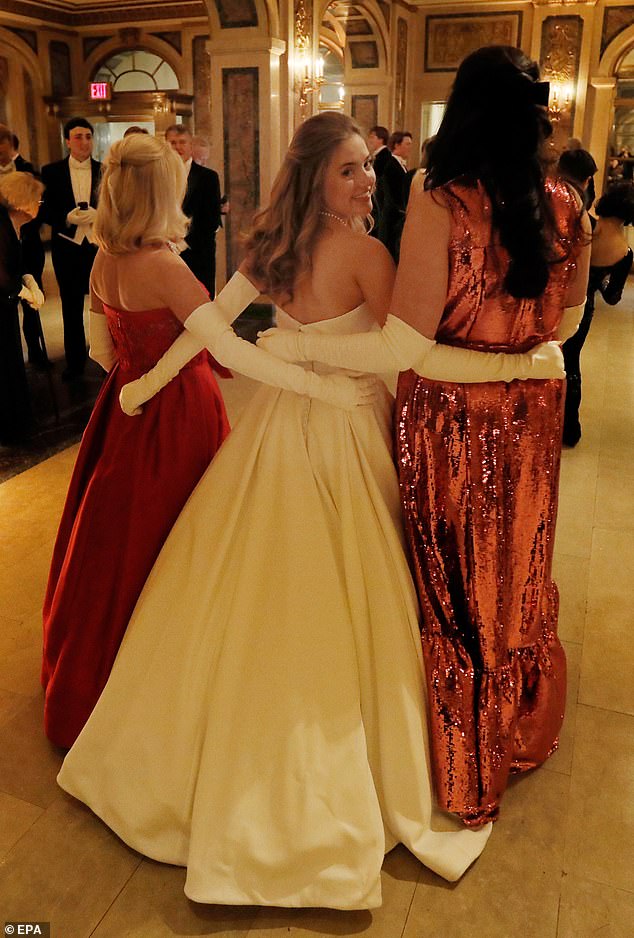 According to the event’s organisers, attendees ‘form lasting friendships’ as a result of attending the ball

In order to snag an invitation to the ball, debutantes must be recommended by a previous debutante of the event.

They then must also be accepted by the Chairmen of the Debutante Committee of the International Debutante Ball – as well as being able to afford the debutante presentation fee.

This has previously been reported to be around $22,000, which the ladies must pay to be a part of the event, which is a benefit for a number of charities, including the Soldiers’, Sailors’, Marines’, Coast Guard and Airmen’s Club of New York City. 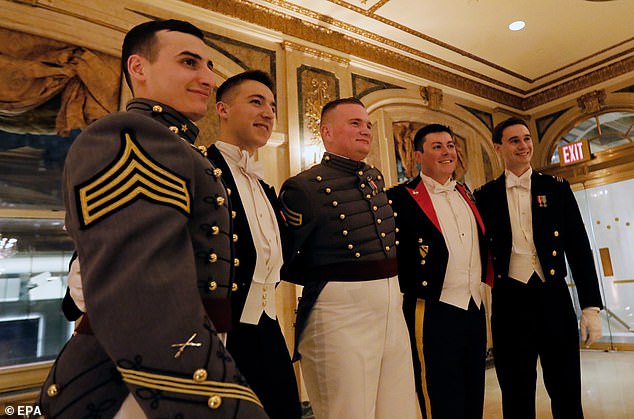 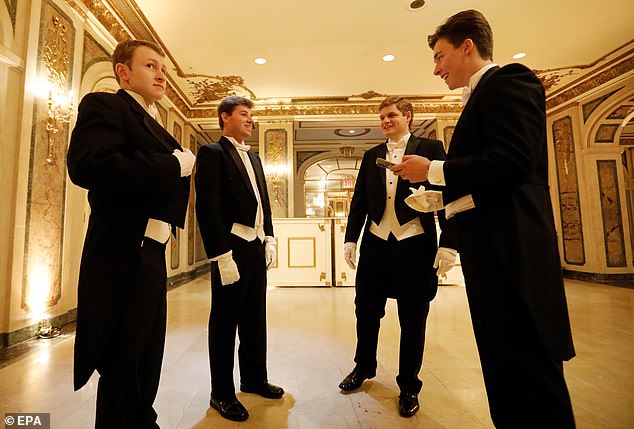 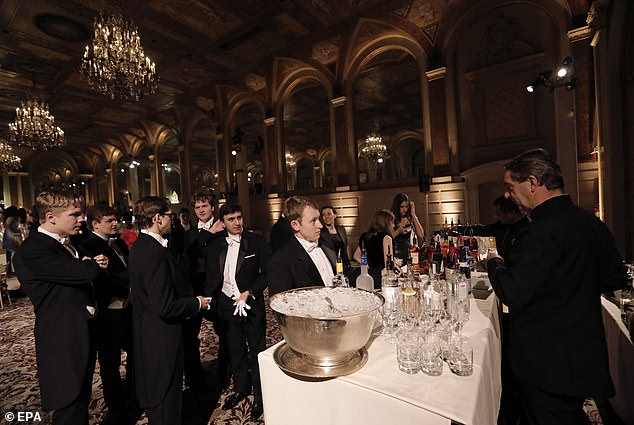 After the receiving line, one of the first engagements of the evening was enjoying cocktails in the Terrace Room (pictured) 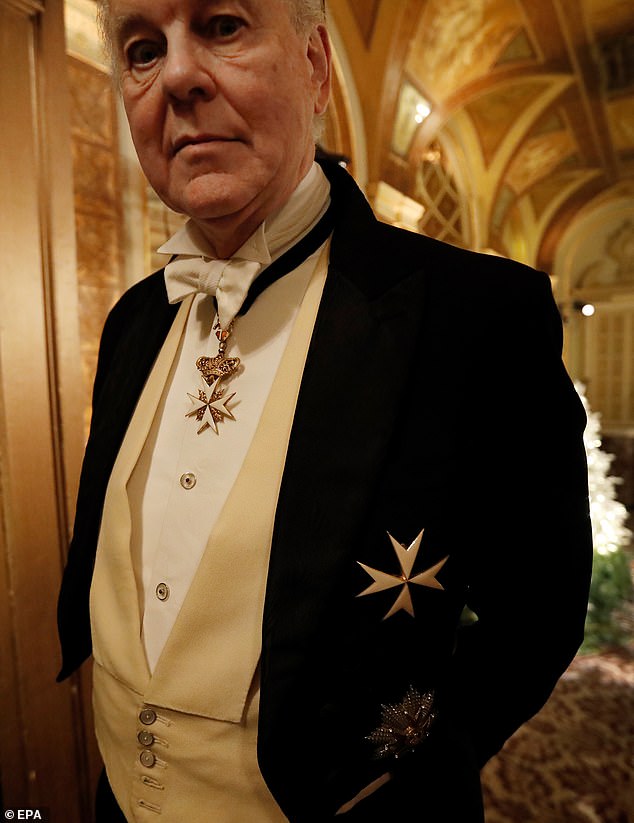 Fathers of the debutantes are also required to don formal wear, including tails (pictured: Guy Stair Sainty, the father of Debutante Miss Arabella Sainty from England) 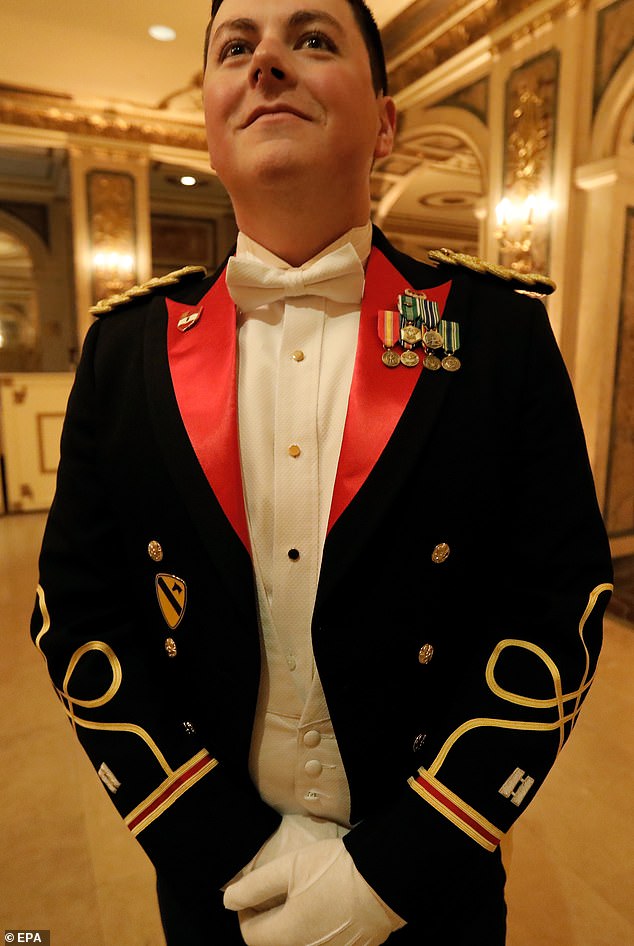 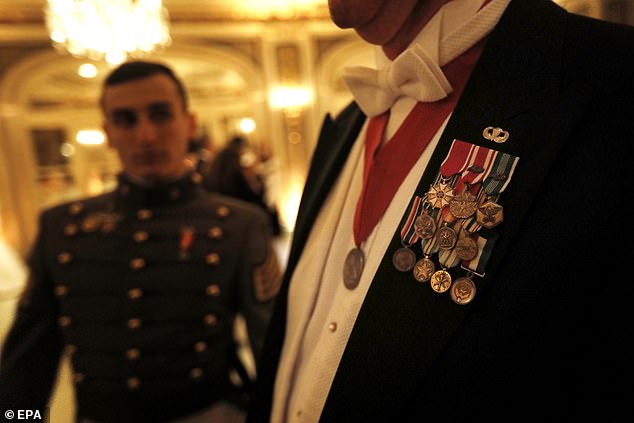 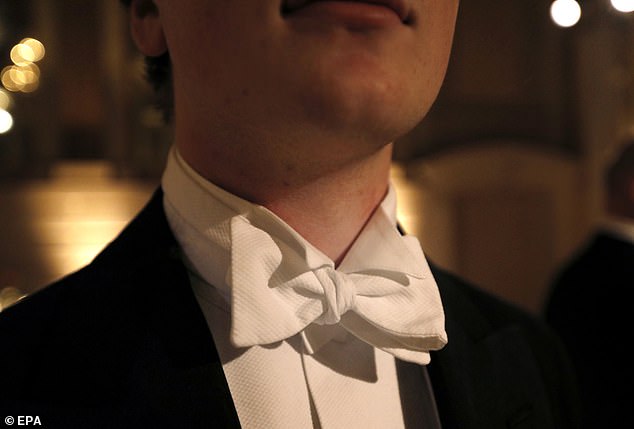 Meanwhile, one of the escorts wears the traditional white tie and tails, the required outfit stipulated by the organisation

These expenses, combined with the costs of travel, accommodations and tickets for friends and family make the evening a costly one.

However, one thing the ladies do not have to worry about paying for though are their male escorts for the evening.

In the past, they were provided by West Point but now must be obtained by the families of the young women, though the Ball’s directors are happy to help with that task.

To be selected for the ball, debutantes must be ‘women of distinction’, who come from well-connected families, and are accomplished in athletics, community service, academics, philanthropy and charity.

THE HISTORY OF THE INTERNATIONAL DEBUTANTE BALL

One of the Vanderbilts started it all by noting that in the jet age, it’s a small world.

Reminiscing about her own debut, Consuelo Vanderbilt, future wife of the Duke of Marlborough, recalled it took two weeks for her to get to England for her debut, then another seven or eight days of exhausting travel to Paris for another ball in her honor.

‘Girls don’t realize what a wonderful opportunity they have to fly around the globe to attend each other’s parties,’ said Vanderbilt.

That remark sparked Beatrice Dinsmore Joyce, a New York Socialite with a dramatic flair for parties and pageantry, to create the first international Debutante Ball as a charity.

Today The International Ball Foundation helps support many charities including The Soldiers’, Sailors’, Marines’, Coast Guard and Airmen’s Club, a home away from home for the military and their families.

That first ball was held in 1954 and soon the annual event became a highlight of the winter social season. Traditionally, at the ball, each debutante is presented while accompanied by two escorts – a young man dressed in white tie and an assigned member from the Naval, Coast Guard, Air Force or Norwich Military Academy, who carries the flag or the country or state the debutante represents.

Lester Lanin and his orchestra have played appropriate music as each debutante is introduced to hundreds of guests who contribute to the Ball’s beneficiaries.

The International Debutante Ball provides a social context where young women and men from all over the world meet one another, have a wonderful and romantic time, and form lasting friendships.

Over the past decades, daughters of Diplomats, Ambassadors, Governors, Presidents, ancient European titles and distinguished Americans from all over the country have been brought together by the Ball and the various parties associated with it.

Kate’s most expensive fashion year yet! Princess of Wales wore a record £176,664 worth of new clothes in 2022