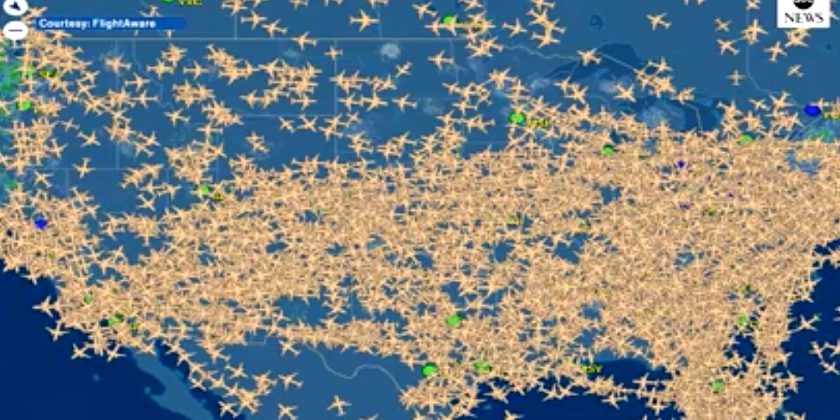 An estimated 54.3 million Americans will travel 50 miles or more away from home for Thanksgiving — between Wednesday and Sunday — marking the highest number since 2005, AAA projects.

And from the looks of it, holiday travel is already off to a bustling start. A flight map courtesy of FlightAware and shared by ABC News shows thousands of flights throughout the country, as millions travel for the holiday.

Despite cold and wet weather in the forecast, fewer than 180 flights had been canceled in the U.S. by late Tuesday, according to ABC News. However, more than 3,500 flights were delayed, including 400 at the Seattle-Tacoma International Airport due to dense fog.

“It really doesn’t take all that much to become a problem on the roadways,” Roth told NPR, noting that some cities will see temperatures in the 20s.  “I mean it’s November … that’s more December, January, February [weather]. In some areas it might end up being record cold so early.”

With weather conditions expected to impact road travel, Missouri State Highway Patrol announced that extra troopers will be out in the state to help prevent crashes, according to WGEM.

State highway patrol officials are also urging people to not use their cell phones while driving and reminding groups to find a sober driver if they plan to drink.

“Fatal traffic crashes most frequently involve an impaired driver, so it is very important if alcohol or some other impairing substance is going to be part of your plans to designate a sober driver to make sure you drive to your destination safely,” Sgt. Eric Brown told WGEM.

The Transportation Security Administration projected that this year would be the busiest for air travel ever, according to WTVA.

“Consumers have a lot to be thankful for this holiday season: higher wages, more disposable income and rising levels of household wealth,” AAA Travel senior vice president Bill Sutherland told The Hill in a statement.

“This is translating into more travelers kicking off the holiday season with a Thanksgiving getaway, building on a positive year for the travel industry.”