Labor leader Anthony Albanese has stepped up his pledge to deliver better wages if he takes power at the May 21 election, telling workers they deserve a government that wants to increase their pay.

One day after making a commitment to higher wages and secure work, Albanese used a speech to a labour day march in Brisbane to urge hundreds of union members and families to campaign hard for Labor by polling day. 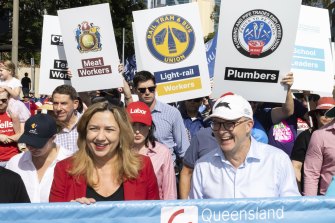 While Labor has attacked the government for allowing prices to rise without lifting wages by the same amount, Albanese and Labor’s industrial relations spokesman, Tony Burke, side-stepped questions from journalists on Monday about a target for the wage increases they believe Australians deserve.

Albanese told the audience at the Brisbane showground they deserved a government that would lift wages.

“You also deserve a prime minister who accepts responsibility, who doesn’t always look for someone else to blame, who unites the country rather than divides it,” he said. “Because hope and optimism are much better values than division and fear, and that is all the Morrison government has got.”

The Labor workplace policies include passing new laws to outlaw wage theft, changing the definition of casual workers in the law, amending workplace laws to ensure better conditions for “gig economy” workers and limiting the use of fixed-term contracts rather than permanent work.

Albanese also criticised the government for not arguing for higher wages for aged care workers, saying a Labor government would do this at the Fair Work Commission.

“You have a government that can’t even make a submission to the Fair Work Commission saying that they support the recommendations of that royal commission,” he told the Brisbane event. “This is a government that is unworthy of this greatest nation on earth.”