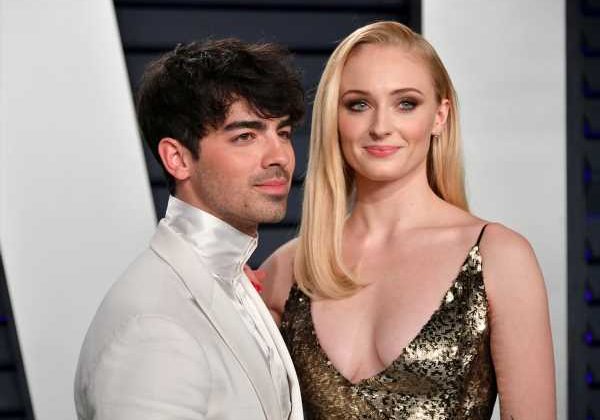 You might not have been able to score an invite to the celebrity wedding of the year, but now it’s possible to own a piece of the Joe and Sophie’s love story forever. According to TMZ, Sophie Turner’s Ring Pop wrapper from her wedding to Joe Jonas is for sale on Ebay, after the Elvis impersonator who officiated their ceremony decided to auction it off online.

The couple — who announced their engagement in October 2017 — tied the knot in a casual Las Vegas ceremony after the Jonas Brothers performed at the 2019 Billboard Music Awards on Wednesday, and the wedding was just as much fun as fans imagined. News of the surprise nuptials first broke when Diplo started sharing content from the wedding on Instagram stories, according to Entertainment Weekly, including a video of Turner walking down the aisle while country duo Dan + Shay sang their song, "Speechless." The couple were married by Elvis impersonator Jesse Grice and exchanged Ring Pops instead of wedding bands, as they still plan to celebrate with a romantic wedding in France this summer.

TMZ reports that Grice found the rapper for Turner’s Ring Pop after the ceremony and decided to list it for sale online, with the bidding starting at a shockingly affordable $10. "Joe Jonas ORIGINAL AUTHENTIC REAL WEDDING RING WRAPPER used by him in Las Vegas," reads the listing for the wrapper, while the description notes that the "wrapper is in very good but slightly used wrapper on foil like material."

In addition to a very enterprising Elvis impersonator, Turner and Jonas’ wedding was attended by the DNCE frontman’s brothers, Nick and Kevin, and their wives, Priyanka Chopra-Jonas and Danielle Jonas. (After all, it’s not a party without the JSisters in attendance.) According to Elle, Chopra-Jonas "appeared to be the Maid of Honour", although Turner herself has said that her Game of Thrones costar and best friend, Maisie Williams, will be a maid of honor at the wedding this summer.

And though their Vegas nuptials made plenty of headlines, the couple has even bigger plans for their French ceremony; during an appearance on The Late Late Show in March, Jonas told James Corden that the pair were planning to honor both their cultures with the events of their wedding weekend. "I thought for the first time I’d be marrying into a family where I’d become a soccer fan, like, a football fan, like, find my allegiance for a team," he explained.

However, Jonas said that "her whole family doesn’t like football; they like rugby. So now I have to figure that out. We’re going to have a flag rugby game at the wedding and a flag football game. So if the groomsmen show up with black eyes and broken arms, I’ll be very proud."

Regardless of whether or not Jonas’ groomsmen make it to the ceremony without injuries, it’s clear that the couple’s wedding ceremony will be all about the pair’s love for one another, as Turner has often gushed about how much her relationship with Jonas has changed her life for the better. "I was fully preparing myself to be single for the rest of my life," Turner told Rolling Stone about her life before meeting Jonas. "I think once you’ve found the right person, you just know."

Considering that Turner said that she felt "a sense of peace" after getting engaged to Jonas, it’s not hard to imagine that she’s even happier now that the pair are officially married. Hopefully whoever buys the Ring Pop wrapper from their ceremony will also get to enjoy that same level of happiness and sugar rush.