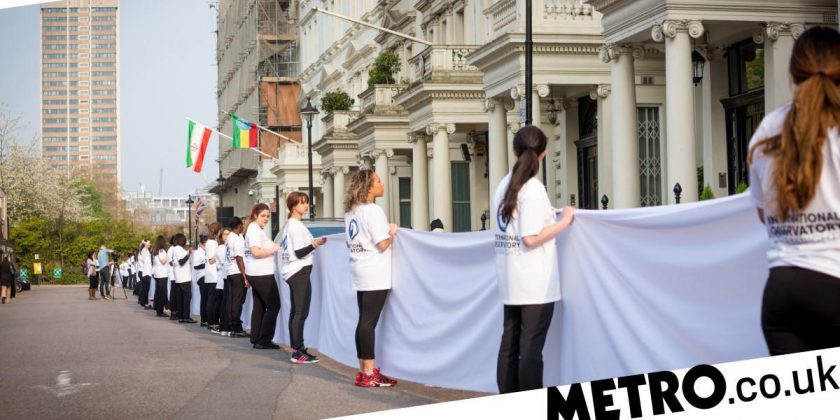 Nasrin’s 38-year jail sentence was passed without a trial having taken place.

White Wednesdays is the work of writer and activist Masih Alinejad, who began the Facebook page My Stealthy Freedom where Iranian women can post videos and pictures of themselves without their headscarves.

It began as a safe, private space for women to be themselves without being threatened with arrest.

In the first two weeks of the Facebook page’s existence, hundreds of videos were sent in by women who wanted to remove their headscarves and support women’s rights in Iran.

With the movement growing in popularity all over the world, Masih came up with an idea which would allow women to protest in public as well as online.

She called on people to wear white to display freedom from the traditionally black Islamic dress which women are required to wear in conservative families.

Soon, women all over the world were taking part in White Wednesdays and sharing their pictures online with the hashtag.

Masih has now been exiled to the U.S, unable to return home for fear of being arrested and tortured.

The IOHR supports Masih and believes that putting a continuous focus on Iran’s treatment of women will impact change.

IOHR Director Valerie Peay tells Metro.co.uk: ‘We are at an ultimate tipping point for human rights in Iran.

‘The utter disregard of women’s rights is appalling; more than 112 women have been jailed in 2018 for merely practising their civil liberties and objecting to forced hijab laws.

‘There are lives at stake and Iran’s head of the judiciary can make a positive change by pardoning Nasrin and all those unjustly jailed–that is why we are protesting–calling for justice.’

The IOHR has campaigned extensively for other high profile cases such as British charity worker Nazanin Ratcliffe, Saeed Malekpour and Ahmadreza Djalali.

They are now calling on the public to support their campaign by posting #WhiteWednesdays on social media on a Wednesday ideally with a white square or even a picture of themselves wearing white.

If you’d like to find out more about how to support the campaign or follow news about women currently in jail or being arrested, visit the IOHR website.

MORE: Feminism needs to cater to Muslim women, not the other way around

MORE: Wearing a hijab for one day is not the solidarity Muslims need

MORE: Muslim women’s modesty only benefits them in society when it aligns with patriarchal and sexist views

The daily lifestyle email from Metro.co.uk.