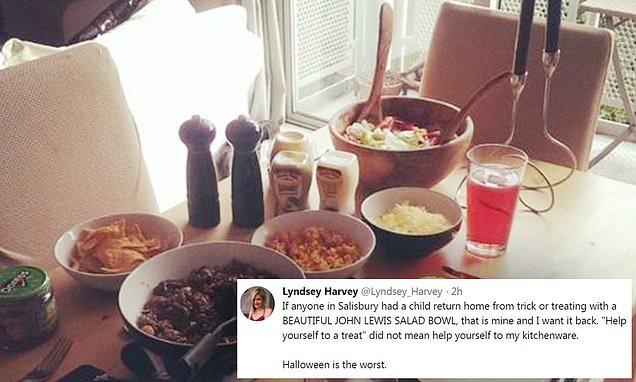 A woman has sent out a desperate Twitter plea after her ‘beautiful’ John Lewis salad bowl was taken by trick-or-treaters on Halloween.

Lyndsey Harvey, from Salisbury, believes the kitchenware – which was a wedding gift – was pilfered by a child after she left it outside with a note reading: ‘Help yourself to a treat’.

She has since seen her tweet go viral and received a flood of responses, with even John Lewis offering to help out with the hashtag #FindLyndseysSaladBowl.

Writing on Twitter on Thursday, the marketing and publicity professional said: ‘If anyone in Salisbury had a child return home from tick or treating with a BEAUTIFUL JOHN LEWIS SALAD BOWL, that is mine and I want it back. 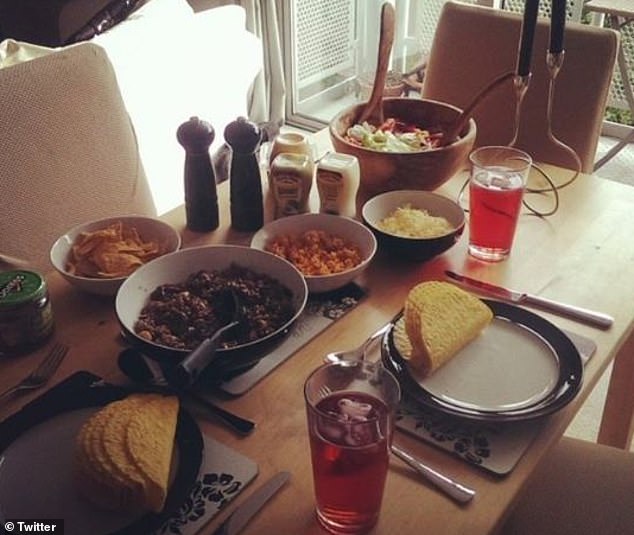 ‘Here it is in happier times’: Lyndsey Harvey believes her John Lewis salad bowl a wedding gift – was pilfered by a child after she left it outside with a note reading: ‘Help yourself to a treat’

The Salisbury mum’s tweet asking for the bowl’s safe return, pictured, has since gone viral

Lyndsey later took to Twitter to explain that she had been bought the expensive salad bowl as a wedding present and was ‘stupid enough’ to leave it outside while she put her two-year-old daughter to bed.

She also shared a picture of the bowl ‘in happier times’ on her dining room table.

Replying to her tweet, John Lewis wrote: ‘Oh no! Maybe it was a g-g-g-ghost! Can you share with us which of our salad bowls it was? #FindLyndseysSaladBowl.’

The thread sparked hilarity on social media with many blaming the disappearance on ‘the Russians’.

Lyndsey’s Twitter plea has since gone viral and received a flood of responses, with even John Lewis offering to help out with the hashtag #FindLyndseysSaladBowl

Mike Hunt wrote: ‘I saw two dodgy looking Russian blokes carrying one just like it. They said they were on their way to the beautiful cathedral.’

Another quipped: ‘Putin has gone too far this time. He’s underestimating this country if he thinks we’re going to sit back and remain passive while our John Lewis salad bowls are going missing.’

It is thought the supermarket is in the process of arranging a replacement.

Another wrote: ‘This is what happened when you help indoctrinate children they can go around with their hands out and get free stuff. Next thing you know you find your favourite salad bowl becomes the free stuff as well.’