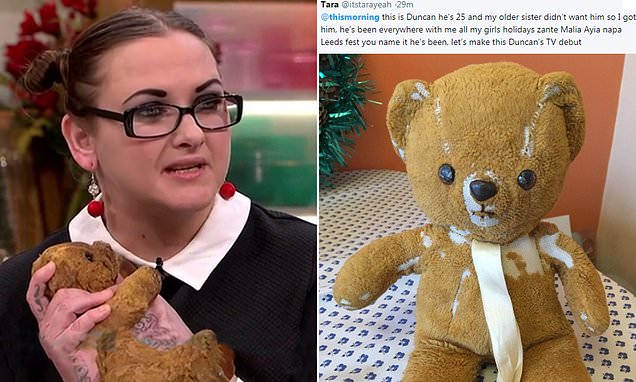 Single woman, 45, reveals she still sleeps with her childhood teddy every night – prompting This Morning viewers to flood Twitter with snaps of their OWN beloved bears

While most of us will be cuddling up to our loved ones this Christmas, it seems that some people around the UK will be sharing their bed with rather more cuddly companions.

Teddy enthusiast Debbie Hodge, 45, told presenters Ruth Langsford and Eamonn Holmes that she will be sharing her bed her teddy bear, WaWa, who has been her companion for the last forty years.

With Ruth noting that the beloved bear smelt a bit ‘pungent,’ Debbie apologised before explaining that he smells a bit ‘beefy’ because she’d just fake tanned.

And it seems that single Debbie is not alone as viewers flooded social media with photographs of their childhood friends, too.

‘I have over 100 teddies. I love them,’ wrote one user, while another said ‘Ha ha sitting here watching This Morning…I’m normal. My great Gran gave me Scamps when I was 3 and now 30. Comes everywhere with me and I can’t sleep without him.’ 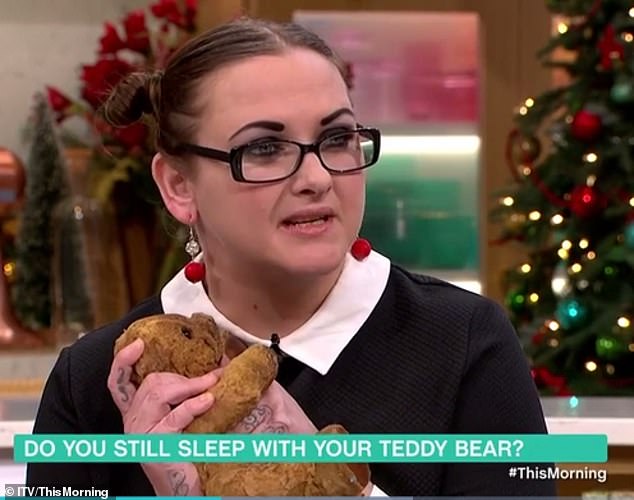 Debbie Hodge, 45, appeared on This Morning earlier today to discuss how she still sleeps with her teddy bear, WaWa, who was given to her as a baby by her mum 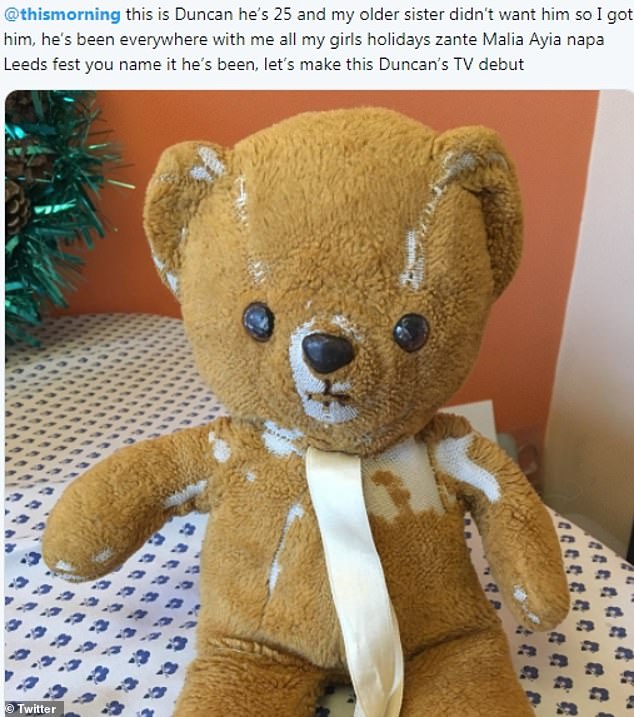 Viewers took to social media to share photographs of their beloved childhood teddies, such as Duncan (above), whose owner said he is after his first ‘TV debut’

One viewer said: ‘This is Ducky (obviously!) He’s about 32 years old and used to be fluffy and white.

‘His eyes are there somewhere. He’s been everywhere with me around the world and gets hugged every night.’

‘This is Astrid Bear,’ commented another. ‘My daughter bought her for my birthday present when she was 4 years old (18 years ago). I cuddle her in bed every night. I recently spent 2 months in hospital and she was there by my side.’

Teddy enthusiast Debbie was given WaWa as a baby by her mum, who has sadly since passed away.

‘I am 45 now so it is quite a long time ago,’ Debbie told Ruth and Eamonn. ‘I think I’ve aged better than he has.’ 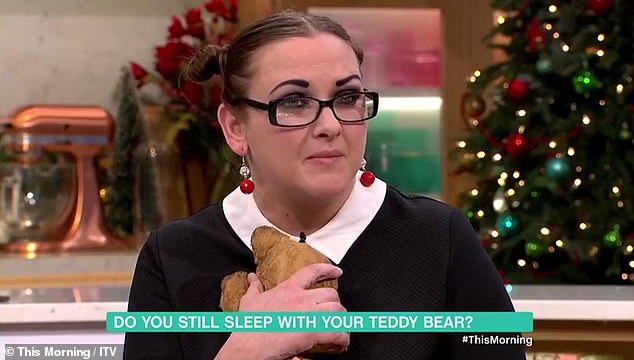 The 45-year-old believes that her childhood companion may ‘possibly’ be to blame for her still being single. Above, Debbie demonstrates how she holds WaWa close to her chest when she sleeps at night 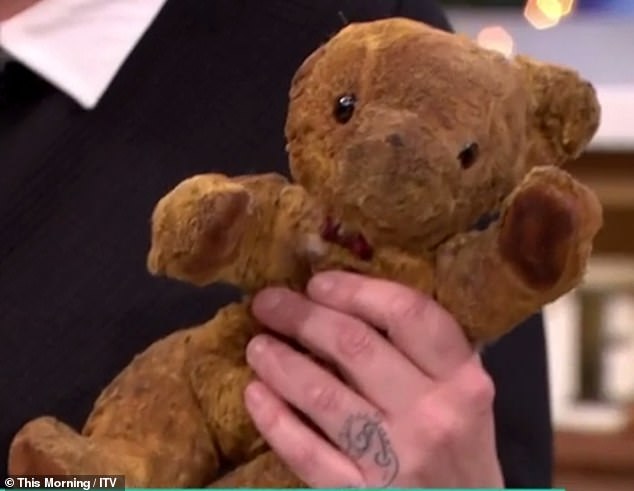 And when it comes to washing her childhood companion, Debbie told the hosting duo that she puts extra measures in place to ensure he makes it out in one piece.

‘Now that he’s been aired to a lot of people I might need to wash him,’ explained the 45-year-old, who appeared on the This Morning sofa earlier today. ‘I might wash him in a tea towel or a pillowcase.’

While a lot of people keep teddies on their bed or in their room, Debbie sleeps next to hers, admitting that in times of stress she holds him ‘tight’ and pulls him onto her chest.

But while single Debbie clasps WaWa close to her heart, she admits he may ‘quite possibly’ be the very reason as to why she has no one else to hold at night. 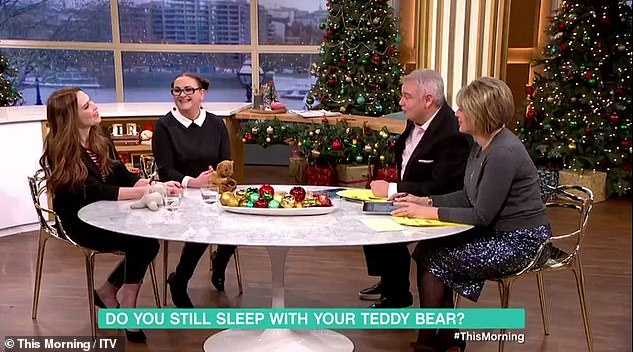 ‘I am single and have been for quite some time,’ Debbie told the two presenters.

‘There have been occasions where I’ve been entertaining and been like, “hang on”…and then picked Wawa up. It did spoil the moment a little bit.’

But one viewer took to Twitter to show that WaWa isn’t the only teddy in the world that gets looked down on in a relationship.

‘This is Floppy. I’ve had him since I was about 8. I’m now 22. I can’t sleep without him. My boyfriend isn’t impressed,’ she wrote. 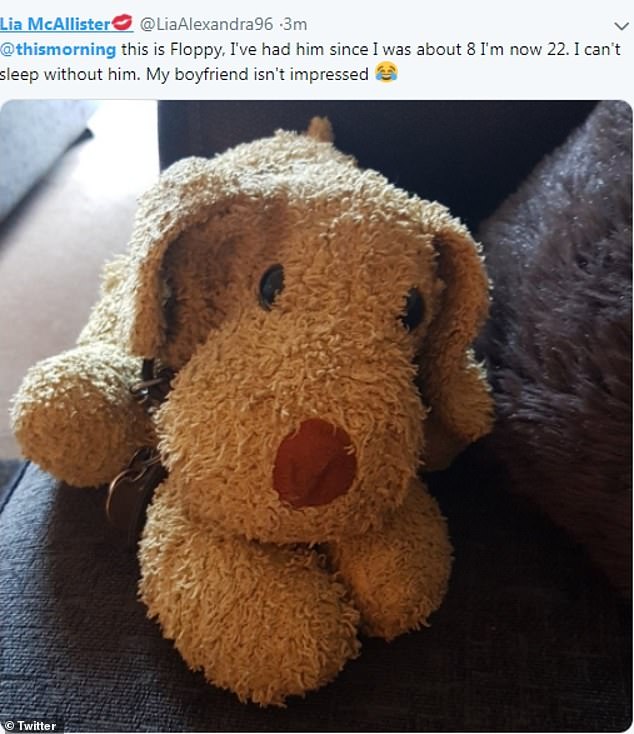 A viewer from ‘This Morning’ spoke out in support of Debbie and explained how her boyfriend ‘isn’t impressed’ that she still sleeps with her teddy, Floppy

Meanwhile, others have taken their teddies half way across the globe – which may be explain why a few are looking a little worse for wear.

‘This is Duncan. He’s 25 and my older sister didn’t want him so I got him,’ one commented.

‘He’s been everywhere with me – all my girls holidays Zante, Malia, Ayia Napa, Leeds festival – you name it, he’s been. Let’s made this Duncan’s TV debut.’

Another said: ‘Here is Knitty Nora – she’s 43 years old on Christmas Day. I got her when I was 7.  She did have black hair and a hat once. She’s been to Spain, Greece, Isle of Wight and America. My mum won her in the community raffle.’ 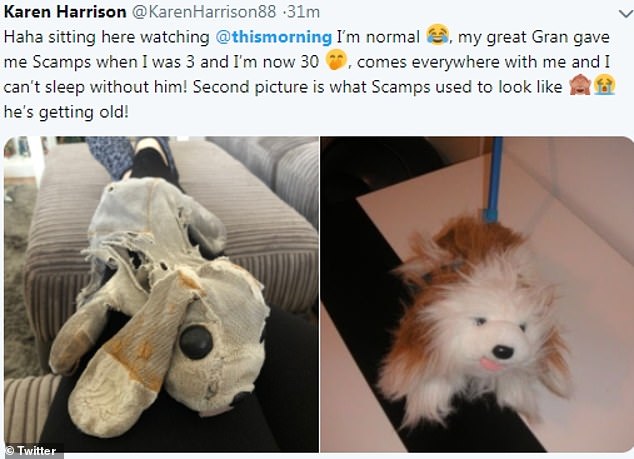 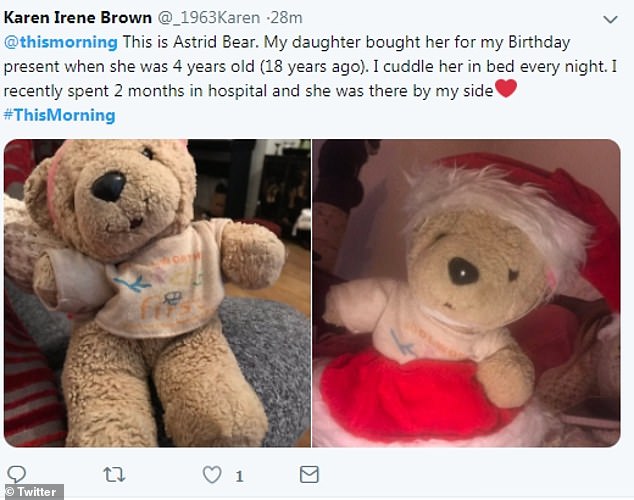 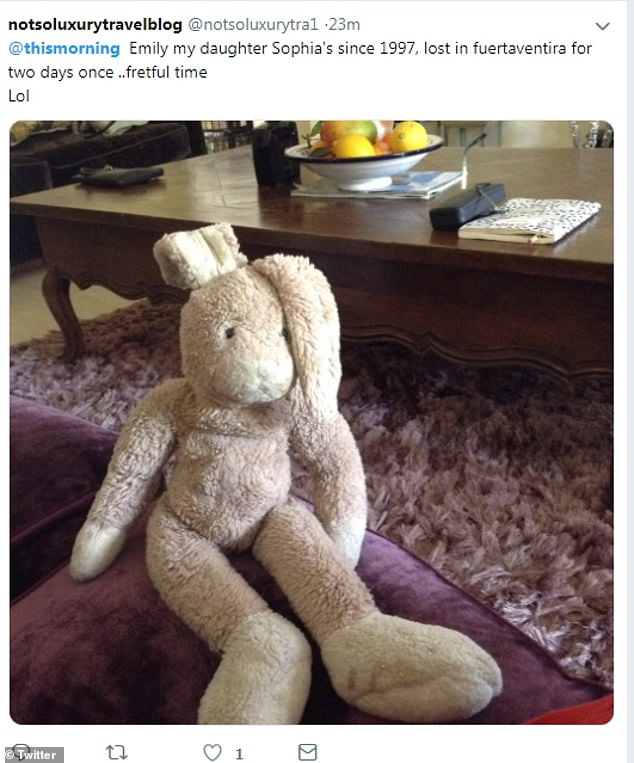 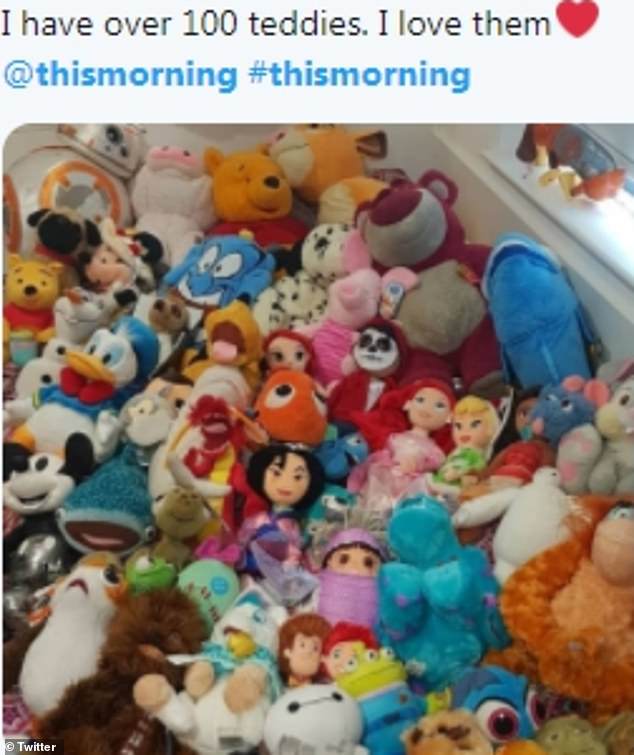 While many viewers confessed their teddies had been half way around the globe, one user put Debbie’s singular teddy to shame but saying she has over 100 in her collection

To explain why so many of us have an emotional connection to our childhood companions, psychologist Emma Kenny also appeared on the show.

‘If you think about any kind of like to your past, particularly the scent, the smell, the memories, all of those things are very present for people who keep a connection,’ the expert explained.

‘It’s a general psychical reminder of a time that was hopefully good and a time when you were a lot less responsible as an adult.’