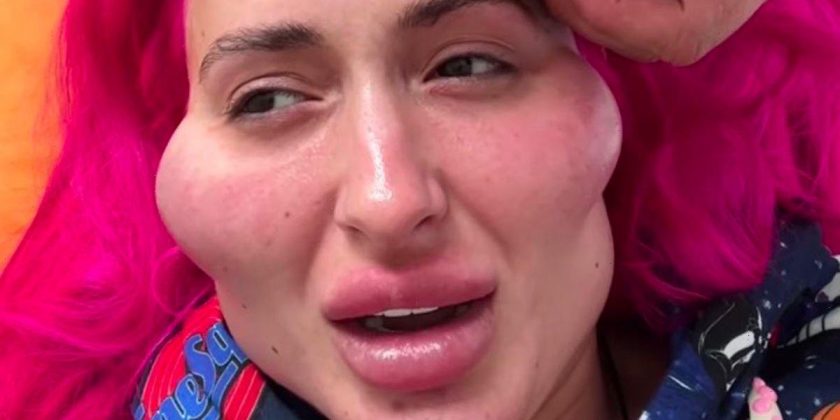 A woman who shot to fame for having the "world's largest cheeks" has shared a video on Instagram of her latest injections, which have left her looking like she has horns.

Anastasia Pokreshchuk, a Ukrainian model, plumped up her pout with lip fillers and chiselled her cheekbones in a bid to achieve the “world’s biggest cheeks".

But it would appear she isn't done modifying her face as she posted a clip of her getting more injections in her forehead on August 11.

In the video, which has gained more than 1,000 likes, her plastic surgeon was seen sticking a syringe in her forehead.

This left her with little bumps above her eyebrow.

The swelling prompted her to warn her followers not to bat an eyelid if they see her with 'horns' later that day.

In an English translation of the caption, she admitted to messing up when administering the injections herself.

Anastasia wrote: "If you see me in the city with horns today, don't be scared it will pass by the evening.

"Saving my forehead with Botox – don't stick Botox in yourself.

"Roman is the best doctor in the world, he always knows what to do when I create problems."

Her followers were shocked to see her having more injections in her face — despite her admitting to the self-inflicted disaster.

One user wrote: "After your cheeks, no one will be surprised by your horns."

Another added: "Let this shot flow in the right direction."

A third commented: "What happened to your forehead and why are they fixing it?? It didn’t look wrong before?"

No matter what fans think, Anastasia seems to prefer her cosmetically enhanced looks.

After getting her first face filler at 26, the influencer's cheekbones started jutting from her face.

She also got lip filler and Botox injected into her forehead.

To stand out from the crowd, Anastasia dyed her poker-straight hair a shade of Barbie pink.

The model also had veneers fitted to create her signature pearly white smile.

In a previous interview, she said: "After I had the injections and saw the changes in my cheeks, I fell in love with them… I understand that they look weird for other people but I don’t mind.”

She's dabbled with bonkers procedures too – from booty massages to skin-smoothing sessions.

The news comes after the model revealed how unrecognisable she looks in throwback pictures taken at the gym, where she has blonde curly locks and a slender bone structure.

After splashing out thousands on plastic surgery, the 33-year-old’s look has got a lot more extreme from her huge facial fillers to going under the knife to give herself XL curves while maintaining her muscular physique.