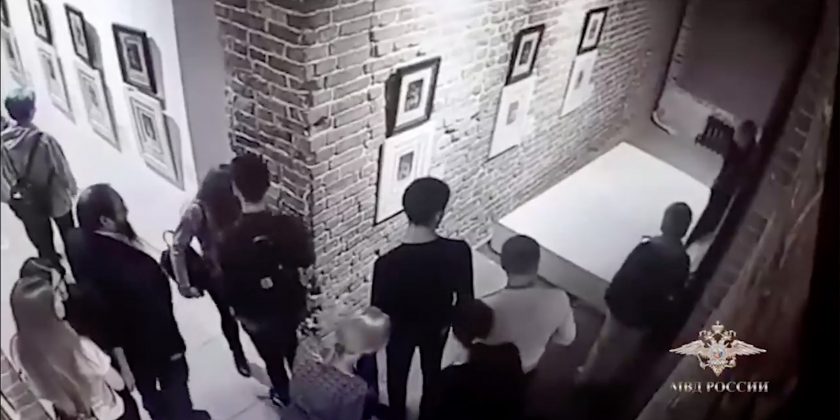 Four women are dealing with the repercussions of a selfie gone wrong after they accidentally damaged two works by iconic artists.

On October 27, the group of women was visiting the International Arts Center Main Avenue in Yekaterinburg, Russia when they went to take a photo alongside Francisco Goya’s etching from the Los Caprichos series and Salvador Dali’s interpretation of it, according to the Russian News Agency TASS.

In surveillance video footage released by the Russian Ministry of Internal Affairs (MIA) on Twitter, three people can be seen looking at art on the gallery’s walls — including one who seems to be taking a photo — when the large art display suddenly falls over.

In the corner of the fallen structure, a person can be seen standing in shock before a group gathers around the damage.

“A group of girls — there were four of them — behaved inadequately,” an employee from the Arts Center told TASS. “As a result, they damaged two works of art, which were on display in a tandem: pictures by Francisco Goya and Salvador Dali.”

The employee explained that while Goya’s work only had its frame and glass broken, Dali’s actual picture was damaged in addition to its shattered frame and the protective layer of glass.

“The incident is being investigated,” the employee told TASS. “The works of art are being examined by specialists.”

Following the incident, officials received a written request from the deputy director of the gallery, asking that they properly prosecute the group for their actions, according to a tweet from the MIA.

Although the Russian police have also opened their own investigation into the matter, Yekaterinburg is reportedly not planning to open a criminal case against the women, CNN said.

It is currently unknown how much the women accumulated in damages and whether they will face further legal consequences.