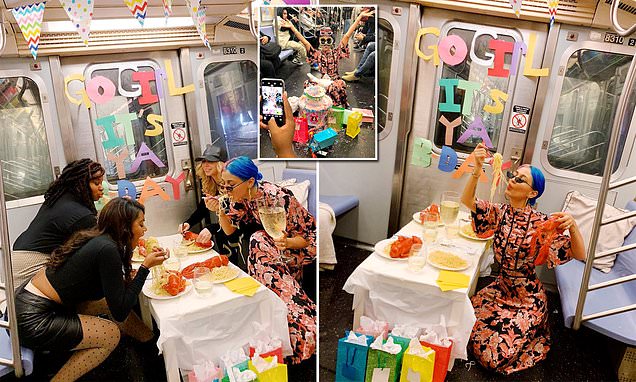 A wild ride! Woman throws a fun-filled 26th birthday part inside a New York City SUBWAY CAR – complete with decorations, a piñata, AND a decadent lobster dinner for her and her friends

New Yorkers constantly complain about the MTA and the New York City subway system, bemoaning its out-of-date cars, slow and unreliable service, and general lack of polish and cleanliness.

But one California woman still decided it was the perfect venue for a birthday party.

On Wednesday, Los Angeles-based photographer Amber Asaly celebrated her 26th birthday inside a J train, bringing decorations, a piñata, and even a lobster dinner on board. 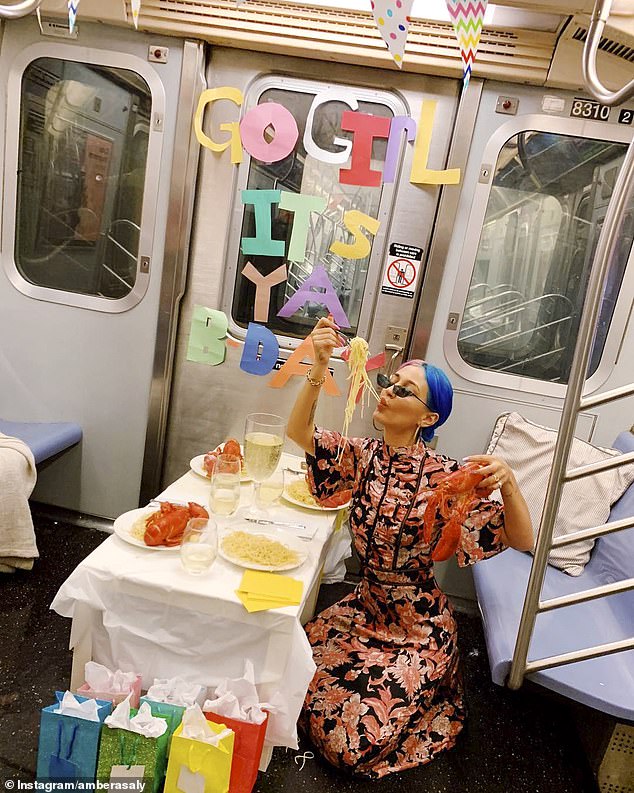 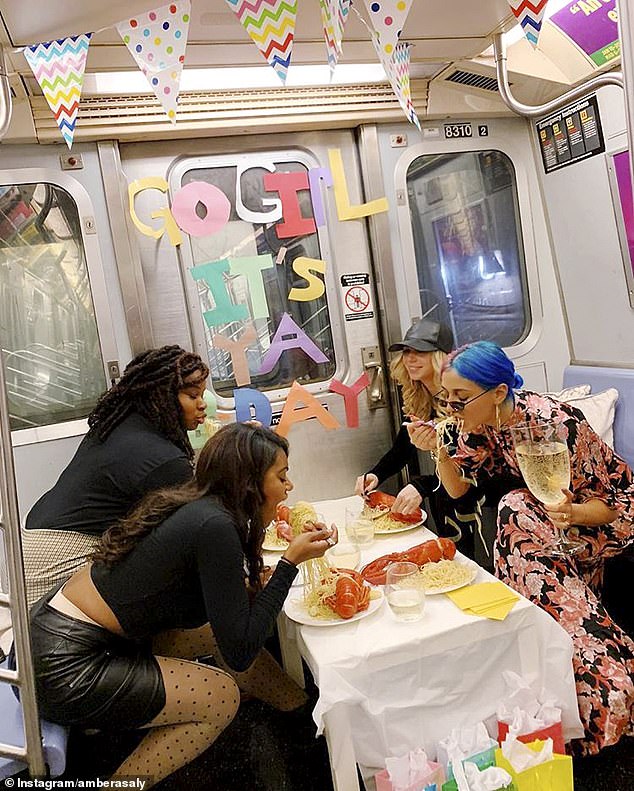 Fancy fete feast: She said reservations ‘fell through’ so her friends organized the party

Amber documented the whole affair on — where else? — social media, posting pictures and videos on Instagram and in her Insta Stories.

She explained that she, her cousin, and several of her friends had had reservations for the evening but they ‘fell through,’ so instead they decided to throw an impromptu fete on a Broad Street-bound J train.

According to the New York Post, the group boarded the car at the Myrtle-Broadway stop in Brooklyn at about 10:30pm on Wednesday night.

Once on board, they got buys, hanging decorations from the walls and ceiling.

They build a table, over which they draped a tablecloth and set up plates and silverwear. 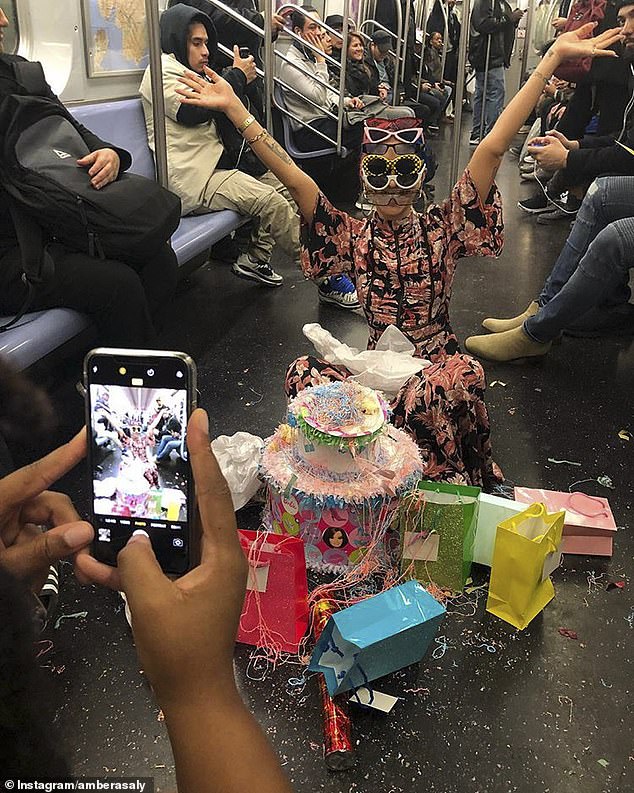 Making a mess: The birthday girl opened up gifts while sitting on the floor of the subway, where they scattered streamers and confetti that they didn’t clean up 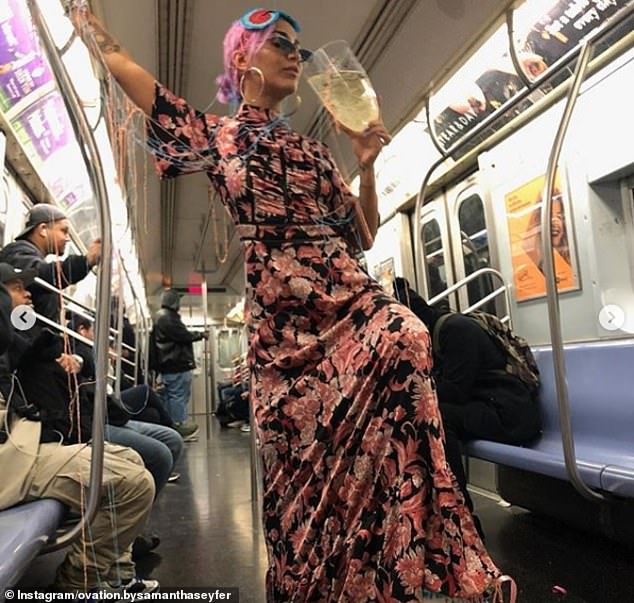 Drink up! She also sipped from an enormous glass of wine while other subway riders ignored the birthday girl and her party

That’s where they place an entire dinner of lobster, spaghetti, and bottles of white wine.

‘Each friend collectively grabbed a bag. Then we installed the table on the train,’ Amber said.

‘We all dressed up. We made it like a Michelin-starred restaurant. That was kind of the whole point.’

Amber also had plenty of gifts to pose with, and at one point swung at a piñata being held aloft by a friend.

According to Amber, other subway riders — all likely used to odd things happening during their travels — simply ignored them.

‘They were just sitting there, not saying anything,’ she said. 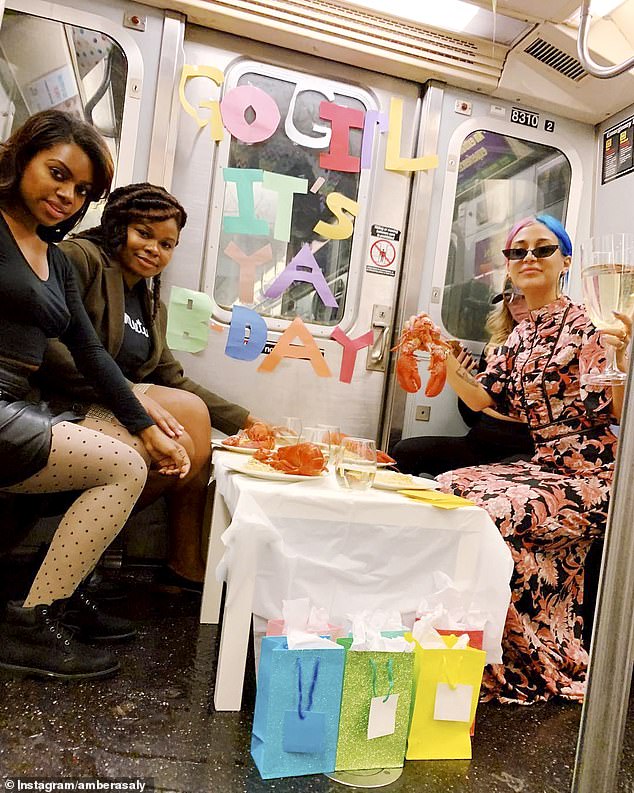 Wild: Amber said the event was ‘crazy’ and her ‘best birthday ever’ 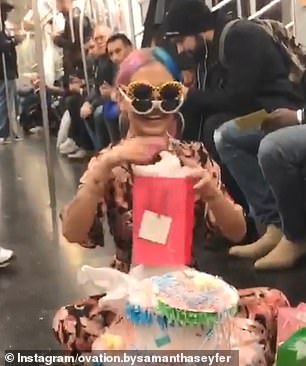 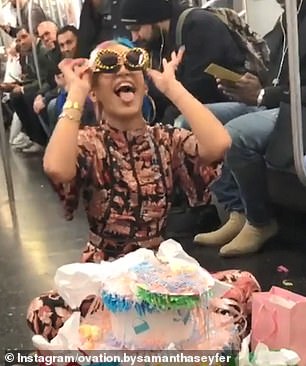 ‘We all dressed up. We made it like a Michelin-starred restaurant. That was kind of the whole point,’ she said 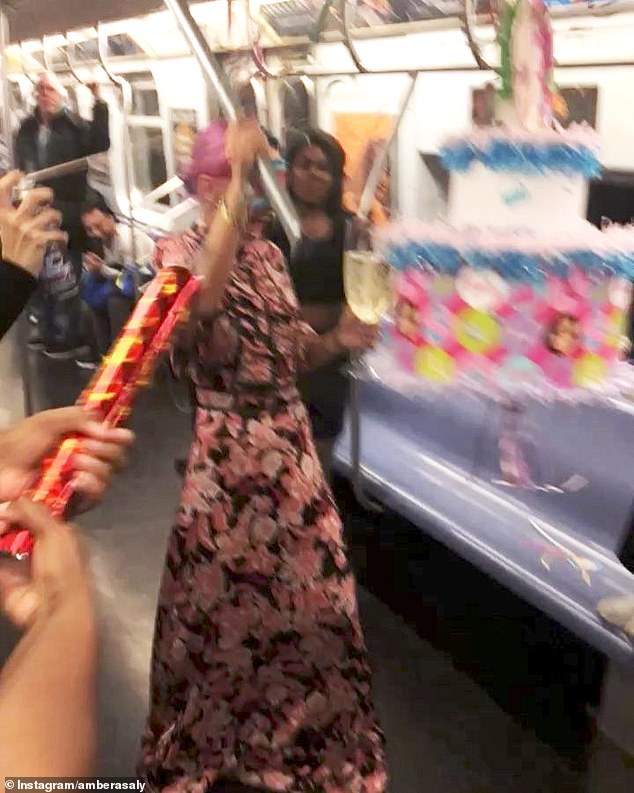 Party games: Amber even hit a piñata that was held up by a friend

Screenshots from her Stories confirm this, with the only reaction from other riders coming during the piñata game.

Amber said that an MTA worker even saw their party but let them continue. The party lasted the length of a ride from Brooklyn to Manhattan and back once the trained turned around, 20 stops in all.

They took the decorations and table on their way out, though video shows they left plenty of streamers and confetti littering the car.

Amber said the event was ‘crazy’ and her ‘best birthday ever’.