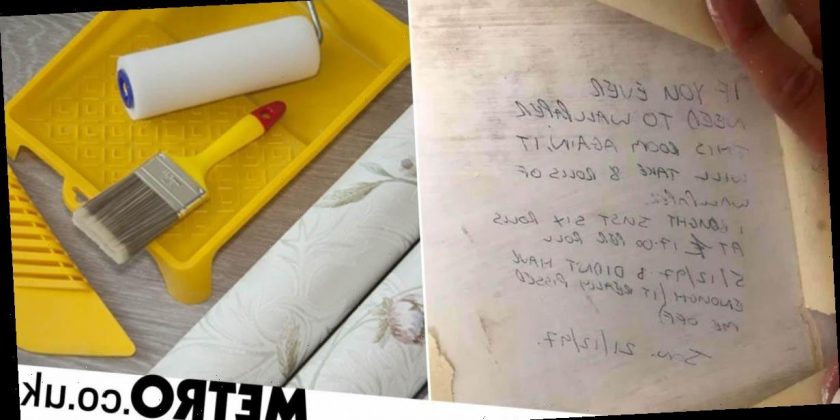 Stripping wallpaper is usually nothing more than a long and exhausting task – but finding a secret message underneath would certainly make the job more interesting.

Charlotte Morrison and her family received a shock when they got round to removing the wallpaper while doing some lockdown decorating.

Charlotte, from London, finally plucked up the courage to remove the many layers of old wallpaper that she knew lay underneath the layers of paint. She was worried about the condition of the plaster underneath, but she wasn’t expecting to see a message from the past scrawled on the wall.

A previous owner left a handy tip for future decorators on the wall before putting up his own wallpaper more than 20 years ago.

‘If you ever need to wallpaper this room again,’ read the note, ‘it will take eight rolls of wallpaper.

‘I bought just six rolls at £17 per roll, and didn’t have enough (it really pissed me off).’

The author of the note signed it ‘Jon’ and dated it ’21/12/97′ – and he clearly wanted to make sure no one else had to be annoyed like he was after not buying enough wallpaper.

Charlotte couldn’t believe that the note had endured all that time, and was delighted to get kind and practical advice from 23 years ago.

She posted the picture on Facebook and began a campaign to find Jon – and she was eventually successful.

A relative of Jon’s got in touch with Charlotte and described the house and even gave the correct address – so they knew it had to be the right guy. So now Jon knows that his message got through.

On social media, lots of people commented and expressed delight at following this wholesome tale.

‘What an interest find! There’s even a price for how much it cost back then,’ commented Ken.

‘I love how precise he was! I think you need to frame this and hang it in that room,’ suggested Melissa.

Charlotte is just thankful that her decorating job was made that little bit easier by some words of wisdom from the past.