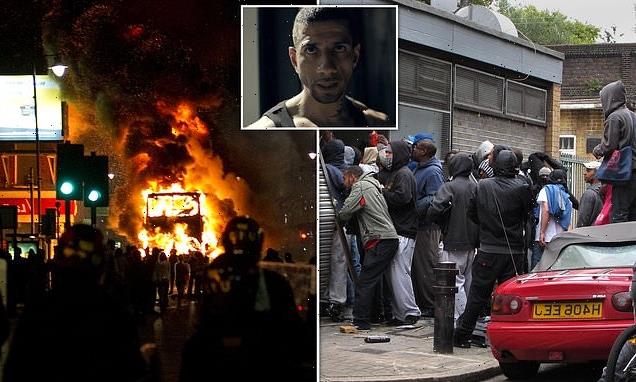 ‘We were like a rabid pack of dogs’: Man who firebombed police station during 2011 riots says there was a sense of ‘freedom’ and that ‘everyone’s heart turned black’

Rioters who participated the week of lawlessness that broke out across the UK in 2011 have revealed what drove them to engage in the widespread disorder that engulfed the country.

Sparked by the death of Tottenham father-of-four Mark Duggan, 29, sporadic rioting, looting and arson attacks broke out across the length and breadth of London and other parts of the country.

Appearing in BBC2 documentary The Riots: 2011. One Week in August, rioters reveal that the ‘buzz’ of committing crime with no immediate consequence turned normal  people into ‘a pack or rabid dogs’.

Lance Francis, who was jailed for 14 years for rioting and arson after firebombing a police station in Nottingham, said that ‘something came over people’ during the week of riots. 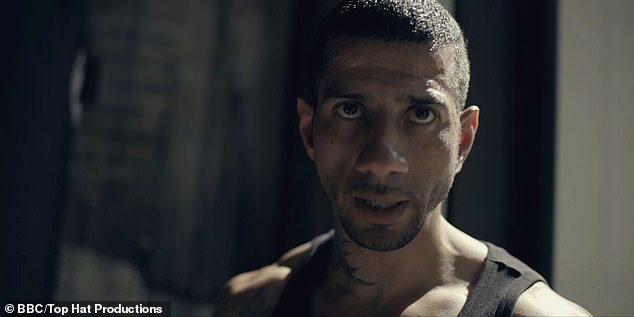 Lance Francis, who was jailed for 14 years for rioting and arson after firebombing a police station in Nottingham, said that ‘something came over people’ during the week of riots in 2011

‘There was a mist in the air, that’s the only way to describe it’, he said. ‘Something came across people. I didn’t even know if something was going to happen to me, you could see different gangs walking around with bricks, knives.’

Francis said that gangs called a truce with each other so they could join in, turning their direction away from each other and towards the police.

He went on: ‘We were like a rabid pack of dogs. It was freedom, I think it released tension inside. People were slashing tyres, breaking fences, slashing car windows. 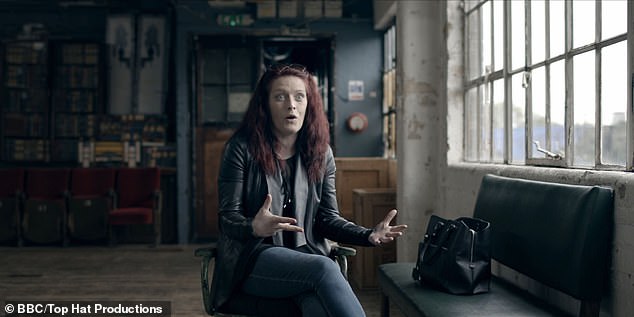 Mother-of-one Katie Lovett, who was convicted of looting a stationary shop in Croydon admitted that she was swept up in the ‘free for all’ of the riots

‘The further we went the more rabid we became, random citizens got attacked. Everyone’s heart went black that day.’

Francis was jailed in 2012 for attacking the Canning Circus on August 9th 2011, and says that he was swept away by mob mentality, only realising how serious the riots actually were until later. 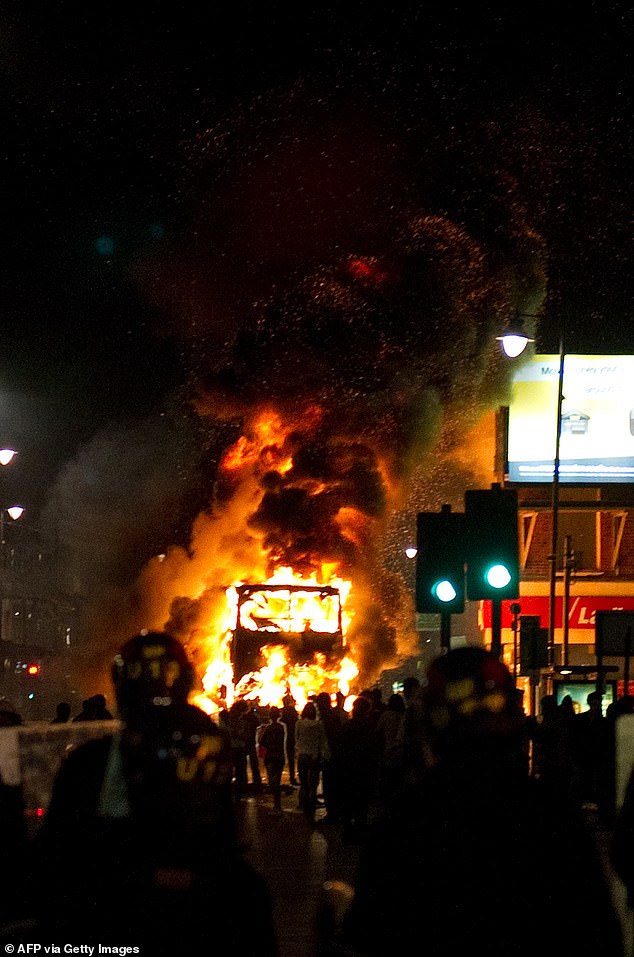 A double decker bus burns as riot police try to contain a large group of people on a main road in Tottenham, London on 6 August 2011 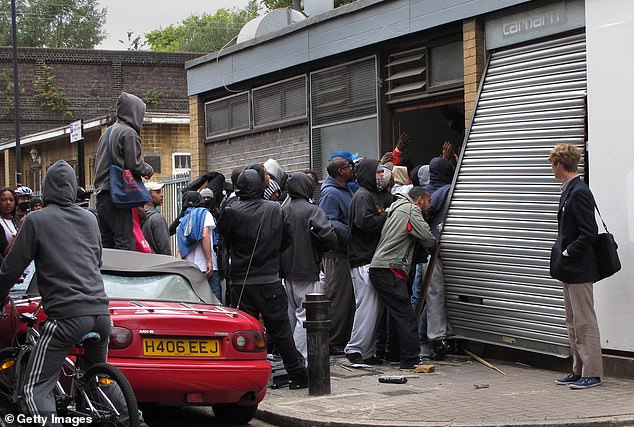 Youths looting a Carhartt store in Hackney on August 8, 2011 in London. Disturbances broke out after the killing of Mark Duggan, 29 and a father-of-four, by armed police in an attempted arrest on August 4 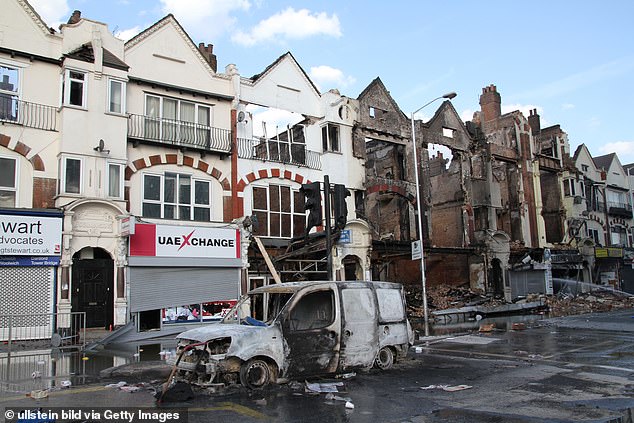 Damage to property after riots and looting in Croydon. Mother-of-one Katie Lovett admitted in the documentary that she stole from a stationery shop after becoming swept up in the ‘free for all’

Meanwhile, mother-of-one Katie Lovett, who was convicted of looting a stationery shop in Croydon admitted that she was swept up in the ‘free for all’ of the riots.

She said: ‘I saw a friend earlier on the day before and he was like, “Katie are you not in Croydon with all the riots?”. To be honest I wasn’t even taking it in, I was like “Nah, sod that”.

‘I literally came out of my door and could see people running in and out of the shop, as I was on my way down I basically thought “I’m having some of that”. I even think the back of the shop was on fire.

Joshua ‘Coinz’ Owens, a rioter from Hackney, said that in the days leading up to the London riots ‘the vibe on the estate wasn’t good’

‘It was like a buzz in itself, running round that shop you could run round and do what you wanted in there. Basically that was a buzz, I didn’t have any time to think ‘hold on a minute there are consequences’, it was just like ‘Wow bloody hell, free for all’.’

Joshua ‘Coinz’ Owens, a rioter from Hackney, said that in the days leading up to the London riots ‘the vibe on the estate wasn’t good.’

‘So a lot of people said,”Flip it, we’re taking into our own hands, we’re going to show them how upset we are”.’

The week of violence began on August 6th, two days after Duggan was shot dead by armed officers who suspected he had a gun, with a peaceful protest outside Tottenham police station.

Stafford Scott was a friend of Duggan’s parents, and told of the community’s  frustrations that the police had not been sharing information with the family of Duggan. 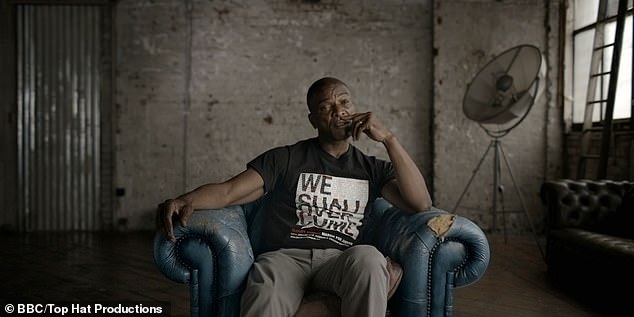 Stafford Scott was a friend of Duggan’s parents, and told of the communities frustrations that the police had not been sharing information with the family of Duggan

Tim Godwin, the acting Metropolitan Police Commissioner in 2011, said that police were unable to share information with the family due to rules set in place by the Independent Police Complaints Commission.

‘This is Tottenham, if anywhere would escalate on the basis of one of their community members being slain in the street and the family being shown that level of disrespect, it’s going to be Tottenham’, said Scott.

The community planned a peaceful protest, with Duggan’s fiancé, Semone Wilson among a group of women who were escorted out of their local police station with police refusing to speak to them.

Despite Duggan’s family calling for calm protest, the mob grew increasingly inflamed and soon turned violent as more people gathered thanks to a nearby football match. 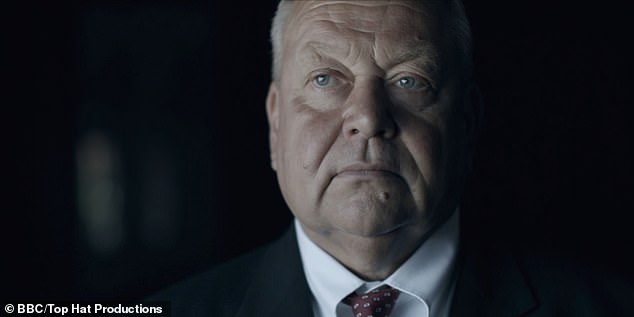 Tim Godwin, the acting Metropolitan Police Commissioner in 2011, said that police were unable to share information with the family due to rules set in place by the Independent Police Complaints Commission

‘It wasn’t helpful and it wasn’t an uprising. It was a riot because it was riotous behaviour. Mark wouldn’t have wanted that, his family didn’t want that.’ 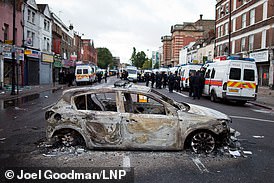 A file photo shows the burned out shell of a police car, melted to the tarmac in the centre of Tottenham High Road on 7 August 2011

Officers had suspected him of being in possession of a firearm.

In the immediate aftermath, the community swamped the streets of Tottenham, calling for ‘justice’ and questioning the circumstances of his death.

At around 5.30pm on the 6 August, Duggan’s family and friends marched to Tottenham police station to ‘demand answers’.

A ‘stone or leaflet’ was thrown at the chief inspector addressing the crowd and police jumped on a 16-year-old girl, reportedly causing her head injuries.

Rioting, arson and looting then ripped through Tottenham and spread across London and into cities and towns across the United Kingdom.

The unrest lasted for six days and five people died as a result.

Havva Goldring was among the first officers called to the scenes, and recalled running away from a mob of around 200 people chasing her on foot as the violence broke out.

‘They smashed the wing mirror off the police car and it was raining glass’, she said. ‘Then I felt a brick whizz right past my face, you could just feel the air so close.’

Goldring and her partner were told to withdraw, but the officer started to ‘panic’ as she saw people ‘coming from all directions and rioters throwing ‘missiles’. Soon Goldring was told to run for safety.

‘I genuinely thought that was it for me, “This is how i’m going to die”, she said. ‘I thought i’m not going to let them take me down without a fight. There was just tow of us, we just started running, you can just hear people screaming behind us.

‘I just thought I’m not a fast runner how have they not caught me, I was expecting to be on the floor, to be beaten up or worse.

‘There was another police officer near the station who said there were 200 people behind you, I just thought this is a miracle. We were definitely outnumbered.’

Retired MET sergeant Darin Birmingham described the riots as ‘fever pitch’ and ‘anarchy’, recalling attempted murders and branding those who got involved ‘vermin’.

Describing his experience in Hackney during the riots, Inspector Chris Donaldson said: ‘Most of them were opportunists, thieves to see what they could get, there was a lot of laughter, seeing all they could get’.

Godwin added of the violence: ‘I was frightened for the men and women that were there. For the people who said “Just go an arrest them”, they all have no comprehension of what it was actually like.’