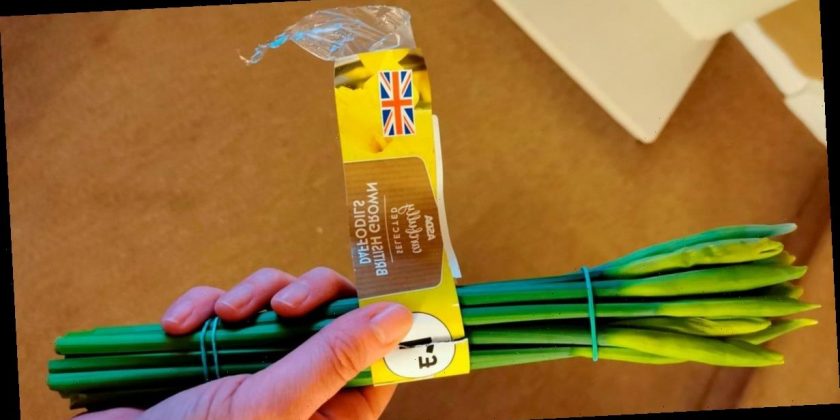 A woman was left annoyed when she thought her were missing from her ASDA order.

However, she ended up finding them in the fridge because her husband thought they were spring onions.

Helen Newman was left baffled when she couldn't find the £1 flowers that she'd ordered for her home.

The 38-year-old complained to ASDA and received a refund from the supermarket.

However, she then discovered the daffodils had arrived but were being kept in a very unusual place.

Helen's helpful husband, Dave, had unpacked the shopping for her – and he ended up putting the flowers in the fridge after mistaking them for spring onions.

The daffodils had been in the fridge for three whole days before Dave discovered them lying amongst the vegetables last Saturday evening [March 27] and presented the very chilled blooms to his wife.

Helen, of Newcastle who runs a lifestyle blog, shared the hilarious story on her Twitter page.

"I ordered some daffs from Asda this week which didn't turn up so I complained and got a refund.

"Turns out Dave thought they were spring onions and they've been in the fridge for the last 3 days."

She share this alongside a snap of her holding the £1 flowers.

One fellow social media user replied: "As a greengrocer, I can confirm this happens on a very regular basis."

While another added: "Haha! Good thing you didn't try and chop them up and eat them"

Another recalled when they had done the same thing and found the daffodils with the spring onions in their fridge – two whole weeks later.

Determined to give the flowers a chance, Helen put them in water and was thrilled when they still bloomed beautifully after their chilly adventure.

Another story that went viral this week on Twitter was about an electrician's act of kindness.

The firm gave a little boy a payslip for all his help while they were working at his home.