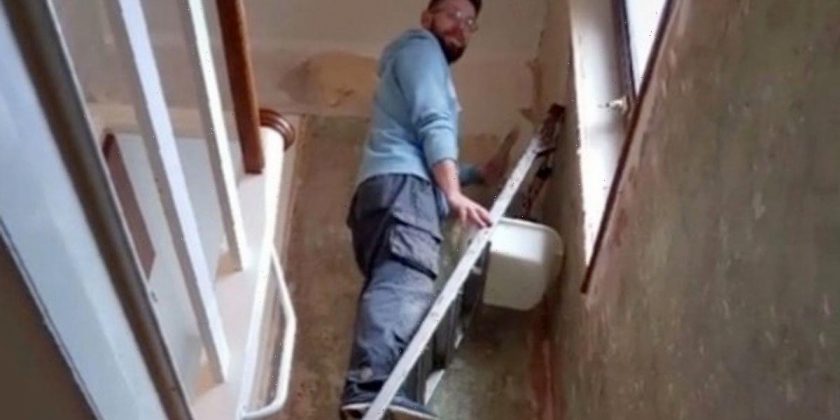 Renovation TikTok sees new homeowners document their house improvements – or for some, the absolute fails they have committed.

This was the case for Tiktok user @walton_reno, a woman who shared on the video posting app that she left her partner with the seemingly simple task of stripping the wallpaper.

The woman's partner was left alone for five hours to strip the paper from the wall that goes up the stairs.

Balancing himself on the ladder, her partner got to work stripping the wallpaper.

When the woman came home five hours later she was met with absolute disaster, as she witnessed the aftermath of what she describes as “wallpaper scraping gone wrong”.

A messy job just got messier as her partner not only removed the wallpaper, he had removed all of the plaster from the wall exposing the brick.

Leaving behind a massive pile of rubble at the bottom of the stairs.

We can only picture that her reaction was less than pleased as the woman added: "Imagine my face when I came back to this.”

Tiktok users chipped in on the renovation mishap in the comment section, with some praising the man for achieving the goal of removing the wallpaper.

Meanwhile, others related to the faux pas.

Another user joined in with the joke: “It’s called doing a job so bad so you never get asked again!!”

A third user added: “This happened to my 70s house.The plastering was so bad it just fell off.”

A different person added: “That looks like he got a bit carried away.”

For more lifestyle stories, sign up to the Hot Topics newsletter here.