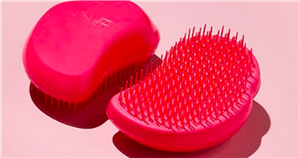 Anyone who owns a Tangle Teezer hairbrush is being urged to give it a clean inside after a TikTok user warned about what it could look like.

A video went viral which shows that the hairbrushes can be taken apart and cleaned inside and outside.

While the hairbrush appeared clean from the outside, something altogether more gross was lurking inside.

The video was shared by cleaning account @cleanwithclo who explained that using the brush in the shower could encourage mould to build up inside the brush.

“This is a public service announcement to anyone to anyone who uses a Tangle teaser hairbrush,” the video starts.

"Today, this was my friend's Tangle Teezer. She's been using it in the shower for three years and has never cleaned inside it,” Chloe explains.

The yellow hairbrush is gently cleaned on the outside using a mould and mildew busting spray and cleaning brush.

“I don’t know if you know, but you can actually open these things up and actually clean inside them, and I would really recommend doing it,” she says.

The hairbrush is then gently eased open to reveal a thick layer of mould formed on the previously unseen inside.

Using the spray again, the mould is removed using the same cleaning brush.

The whole thing is then given a good rinse under the tap, and the Tangle Teezer is as good as new.

She finishes the video by suggesting viewers take a look inside their own Tangle Teezer: “Please open it up and have a look, you might be so shocked.”

If you use the Tangle Teezer in the shower or on damp hair, then this is definitely something that you will want to try.

"ANYONE WHO OWNS A TANGLE TEASER! I am still shocked about how disgusting this was!" Chloe captioned the video.

Viewers of the video were keen to try the technique for themselves.

"I've had mine for five years and have never cleaned it, Imma go clean it now," one commenter shared.