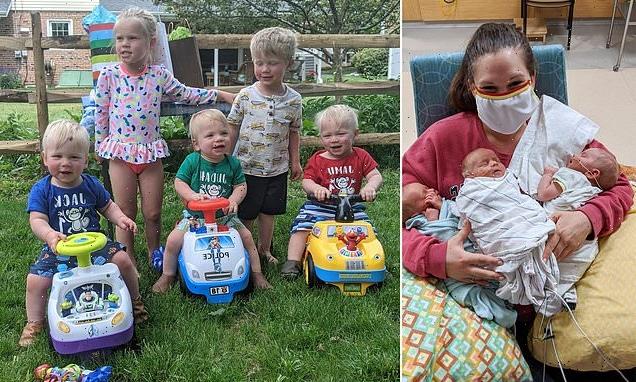 Woman, 33, who wanted a third child to complete her family is shocked after naturally conceiving TRIPLETS – making her a mother-of-five in the space of three years

A woman has become a mother-of-five in just three years after giving birth to spontaneous triplets.

Holly Bassler, 33, was ‘shocked’ to discover three heartbeats at an eight-week scan in 2019 because multiples do not run in her family.

The homemaker, from Pennsylvania, instantly felt ‘terrified’ because she already had two children Aaralyn, then two, and Jessie, then one.

But now, 18 months on, Holly couldn’t be happier with her big family, and describes Judah, Jamie and Jack as ‘miracles’.

Only one in every 10,000 pregnancies results in naturally-conceived triplets. 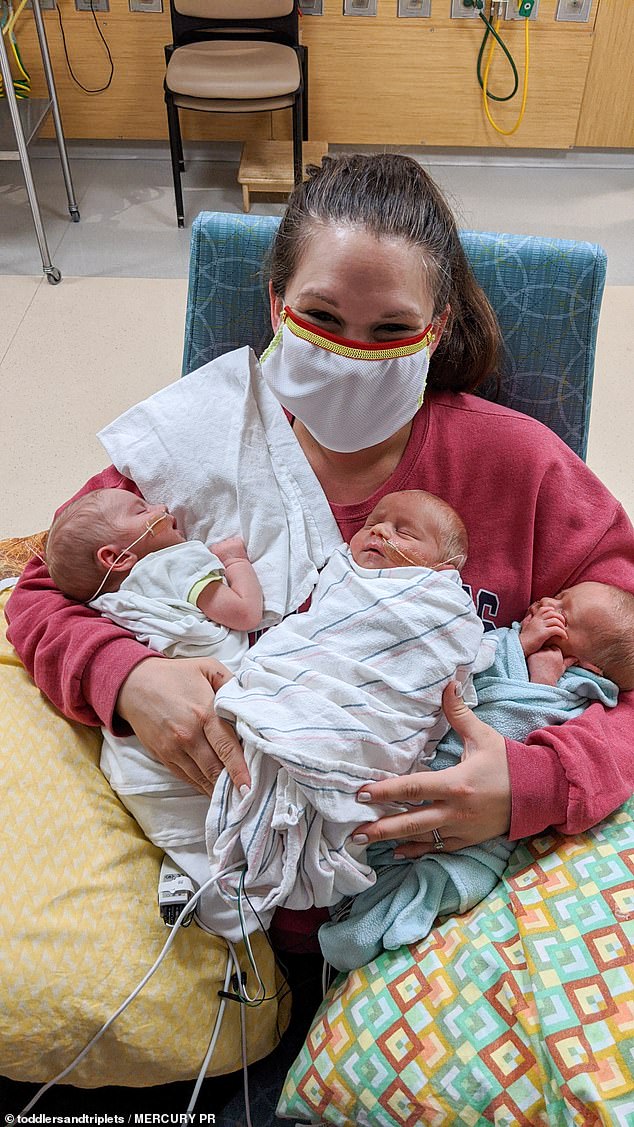 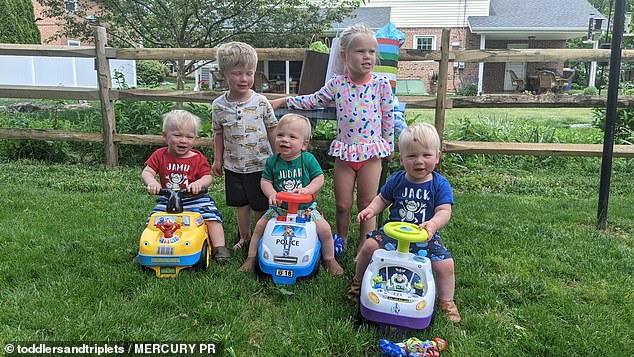 The triplets were unexpected for the family who don’t have a history of multiples. Pictured: Jessie, 3, Aaralyn, 5, and triplets Judah, Jamie and Jack

However, Holly admits it isn’t easy having five children under five.

She said: ‘My husband Mike, 32, who is an electrician, and I wanted to have three children who were close in age so they can grow up together.’

‘We never thought we would have three babies at once as none of our families has multiples.’

‘I went to the ultrasound alone and I was in total shock when they said there were three sacs.’ 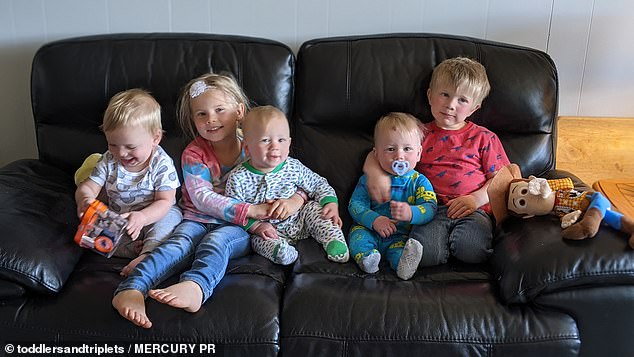 Holly and Mike had originally planned on having three children and wanted their brood to be close in age. Pictured: Judah, 18 months, Aaralyn, five, Jack and James, identical, 18 months, and Jessie, three 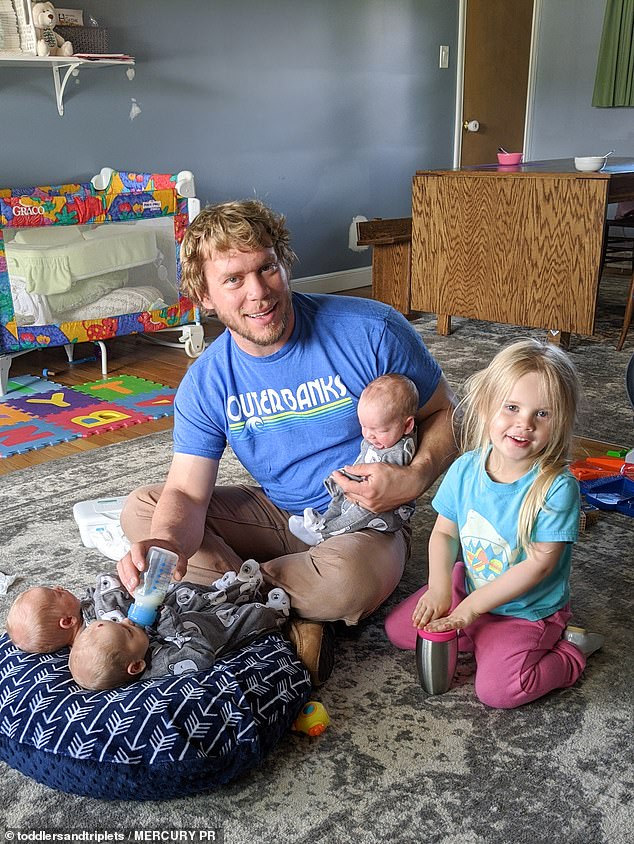 The parents were shocked to see three heartbeats on their eight week scan as multiples don’t run in their families. Pictured: Mike Bassler, 32, with triplets and Aaralyn, five 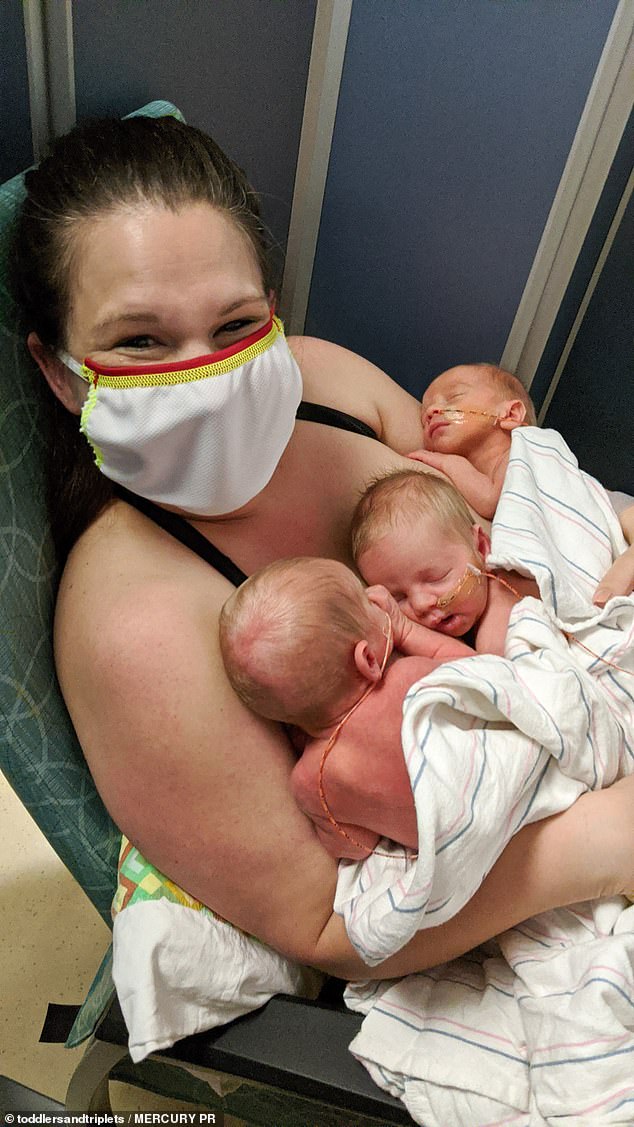 At 34 weeks and three days, Holly had a c-section. The triplets were born on May 10 2020. Pictured: Holly with her triplets after giving birth

‘It was overwhelming and I began freaking out.’

‘I was worried in case I wasn’t going to be the mother I’ve always wanted to be as it was hard enough with a one and two year old.’ 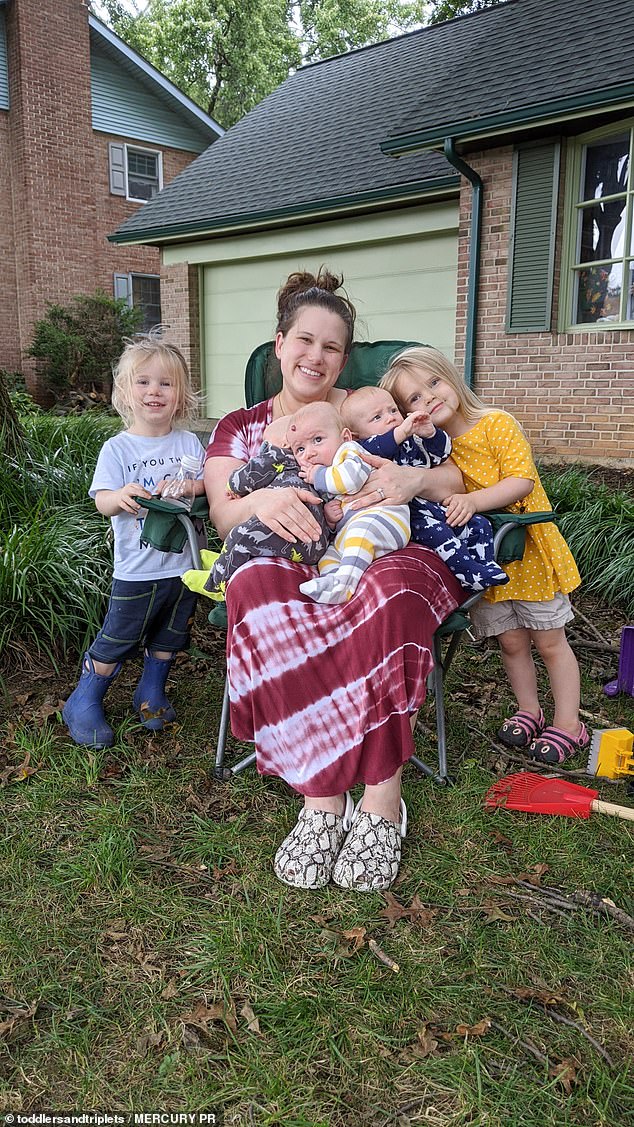 Holly admits to ‘freaking out’ when she found out but luckily had an easy pregnancy. Pictured: Jessie, three, Holly Bessler, 33, holding triplets, Aaralyn, five. 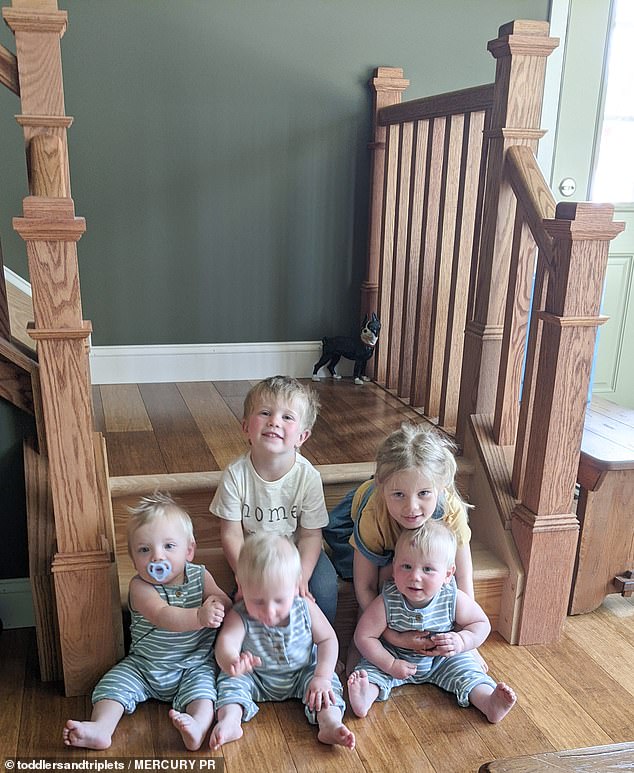 18 months on, Holly couldn’t be happier with her big family. Pictured: Jessie, 3, Aaralyn, 5, and triplets Judah, Jamie and Jack 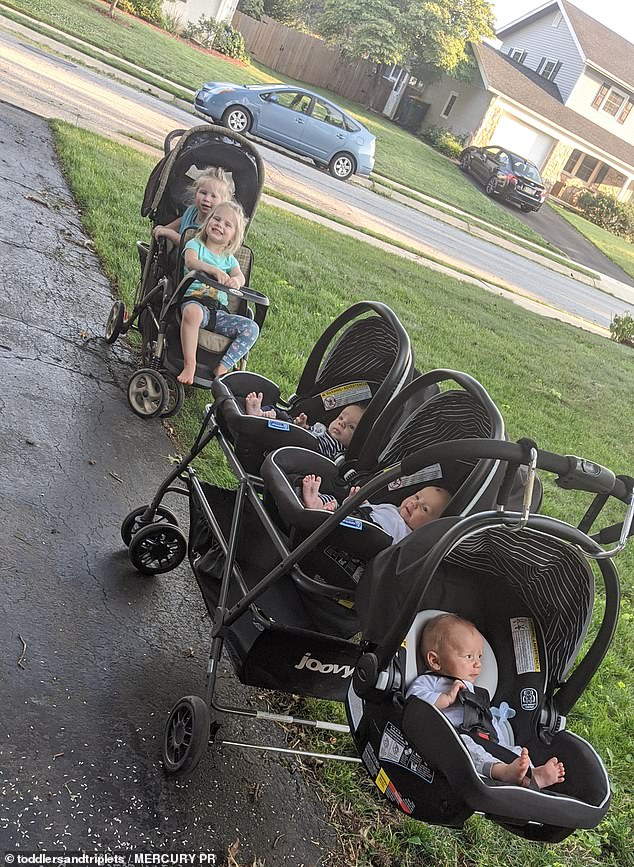 Having so many children is chaotic for Holly and Mike but they’re happy they have children so close in age. Pictured: Aaralyn, then three, Jessie, then two, triplets Judah, Jamie, Jack

She adds: ‘The pregnancy was wonderful. I wasn’t sick and I wasn’t super sore.’

‘I had no health concerns, it was fantastic and everyone was growing perfectly.’

‘At times, I was worried because Jessie was still nursing and both kids were sleeping in our bed.’ 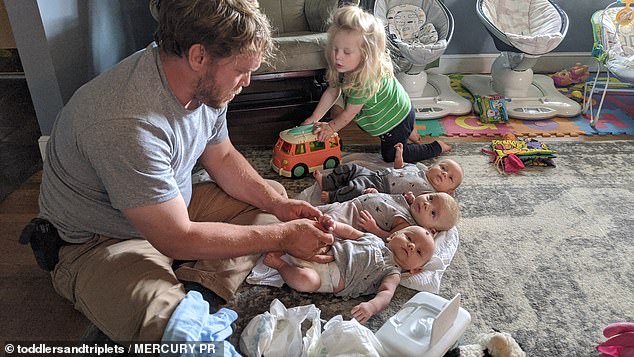 Having so many young children means the parents have to deal with a lot of overstimulation and constant demands. Pictured: Mike, 32, triplets and Jessie, three 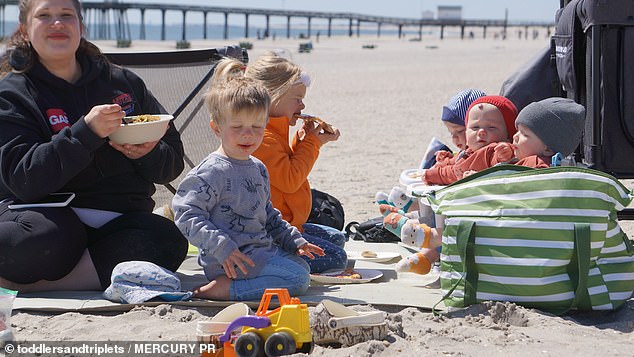 ‘I worried how it will work with five kids but then I had to remind myself how amazing it is that my body has created three babies at once.’

‘It’s a miracle and a blessing.’

Holly has had her hands full since the tots have arrived.

She says it is difficult to spend an equal amount of time with each child. 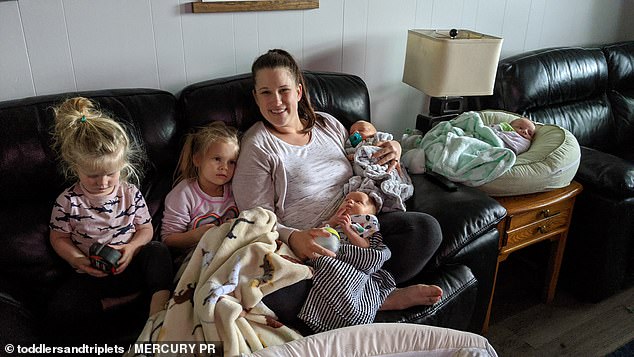 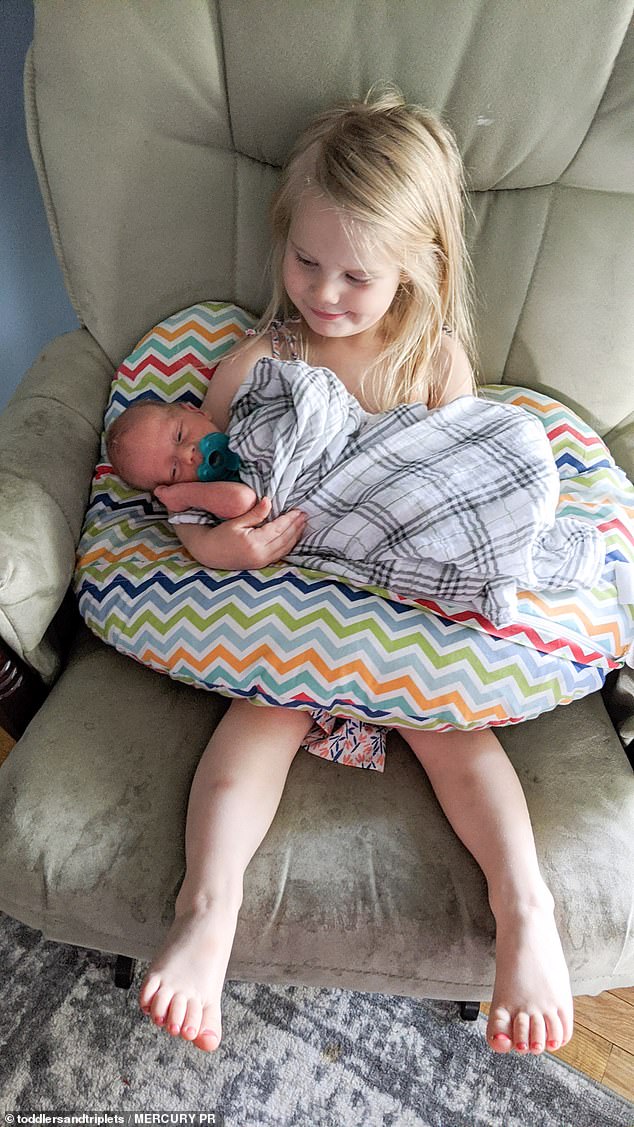 Holly admits the triplets have been good for her oldest two children as they’ve become more compassionate. Pictured: Aaralyn, five holding one of the triplets

Holly said: ‘Our lives are very busy and chaotic.’

‘It is difficult but I have a lot of faith that good days are coming.’

‘The overstimulation and constant demands of having all the kids is the hardest part.’

‘As they are all so young, they still need me for so many things.’

‘I feel bad that I can’t be in more than one place at one time.’

‘But I am happy that they are close in age as they will be able to experience life together.’

‘The triplets have been good for Aaralyn and Jessie as they have become considerate, helpful, sociable and friendly.’