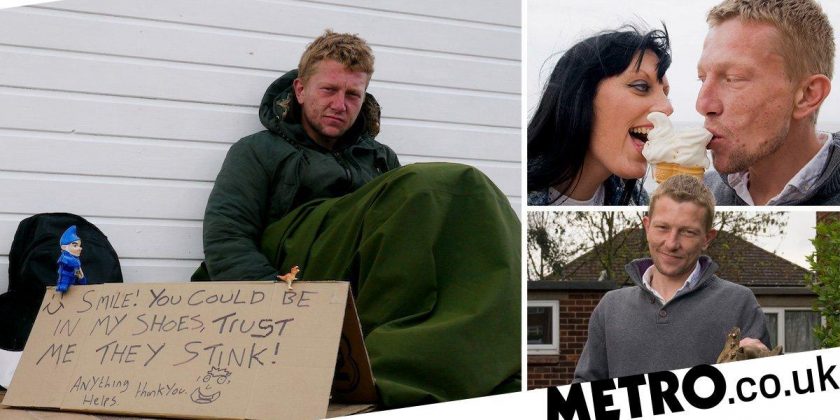 A couple have fallen in love despite the unusual circumstances they met in.

38-year-old Katie Nicol met her now-partner Jon Haynes while he was homeless.

Katie says there was ‘instant chemistry’ between them despite Jon sleeping on the streets.

She used to go and sit with him by his usual spot on the seafront, near an ice cream stand, every single day. And, before long, they were swapping love notes. He even used to write her poems and she would invite him over for homemade roast dinners.

Within three months the pair were officially dating and Jon, 31, is now off the streets, has his own place and has a job.

Deeply in love, they have now been together for eight months.

‘We hit it off and clicked straight away, he seemed so genuine,’ divorcee mum-of-two Katie, of Grimsby, said.

‘Our relationship has got a lot, lot stronger.

‘Every day we laugh, we just laugh all the time.’

Jon – who had been hooked on heroin and the hallucinogenic Spice – had been homeless for 18 months.

But Katie has turned his life around and he has even met his long-lost dad Gary, who he had not seen since he was six years old.

‘She’s helped me a lot, in so many different ways,’ Jon said.

He said life was tough living in a tent near the beach.

‘I got booted in the head a few times, chased and spat at,’ Jon said.

‘But a bloke that owns a couple of ice cream shops down there used to look after me,’ he explained.

Support teacher Katie said: ‘I’d seen him from driving past, and I went to sit with him and said “What’s your story?”

‘We just got on. From then on I went and sat with him every day.

‘He said he wanted to change his life so we decided we would work towards that together.’

The couple would leave notes for each other in Jon’s shoes – which he left among his worldly possessions if he went for a walk.

The first note was from Katie to Jon asking his favourite food, however they quickly developed into love letters.

Jon would also write poems about sleeping rough and his romance with Katie, which she has kept.

One of the poems read: ‘I met Kate a few weeks ago.

‘I started to give up on myself.

‘This lovely woman stopped and gave me some help.’

Another read: ‘She’s amazing, prettier than any flower.

‘Beautiful on the inside as well as the out.’

It was then that Jon thought the relationship might develop into something more.

‘It was when she was sending me those notes, I thought there was something different here,’ he said.

‘I really liked coming back to them.’

Jon had started sleeping rough after spending more than two-and-a-half years in prison.

He was convicted of GBH after assaulting a man he caught in bed with his former girlfriend, Katie said.

Jon had a cardboard sign, when he was begging, that said: ‘Her lawyer was better than mine.’

However this did not put off Katie, who invited Jon round for a shower, a haircut and roast chicken two months after meeting him.

‘I wasn’t worried when he first came to my house, I felt like I could trust him straight away,’ the support teacher at a behaviour unit explained.

‘I asked him what’s your favourite food, and he said a roast dinner.

‘He hates sausage rolls because he got given them all the time.

‘He said I don’t want to ever eat chips again.’

Jon asked Katie out shortly afterwards, and romance blossomed between the pair and she helped him kick the drugs.

While Katie’s mum Annabel was very supportive of the loved-up pair, not all Katie’s friends shared that view.

‘We’ve had a mixture of reactions,’ Katie said.

‘The majority of my friends have been really supportive, however one has really had a major issue with it.

‘People meet on Tinder which I think is more dangerous than sitting and talking to someone for four months,’ defiant Katie blasted.

Mum-of-two Katie is recently divorced, but said she still gets on well with her ex-husband and would never put her two grown-up children in danger.

She also set up a reunion between Jon and long-lost dad Gary for the first time in 25 years.

With the help of Jon’s probation officer and the prison warden, they tracked him down and arranged a meeting in Grimsby.

Jon said: ‘My mum would move us around loads when we were kids, to keep us away from my dad.

‘Katie helped me find him. I was a bit overwhelmed when I first met him.’

‘It sent Jon slightly funny at first but recently their relationship has got much stronger,’ Katie explained.

Jon and Gary are now making up for lost time – he even lived with Gary at his home in Burton, Derbs, for several months.

The couple now often go and stay with the family in the Midlands, and regularly meet up for barbecues.

Jon says he will be forever grateful to Katie for everything she’s done for him.

‘I used to think about this when I was sleeping on the beach, that I won’t be here forever,’ he said.