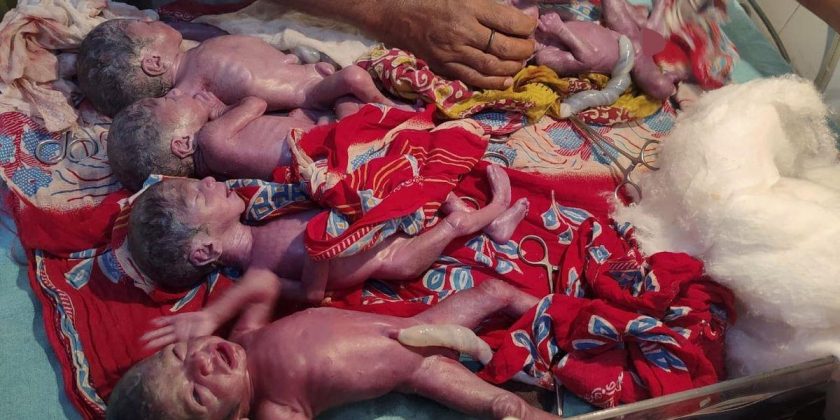 A mum-to-be who was expecting to give birth to a single child surprised doctors by having quintuplets.

Phool Jahan, from India, already had a four-year-old daughter and hoped for a little boy, but came home with a whopping five babies.

We’ll bet her partner was shocked!

The five babies, three girls and two boys, were born at Sadar Hospital in Bihar, eastern India, where they were transferred to ventilators.

Since birth, the quintuplets have been under medical supervision in the Intensive Care Unit.

Doctor Rita Sinha, who delivered the infants, said the case was “one of a kind”.

The odds of conceiving quintuplets – that’s five babies at once – is around one in 60million naturally, reports Peanut.

When IVF and fertility treatment are involved the chance of having quintuplets goes up to around six in 10,000, reports NewsWest9.

In the UK in 2018, around 15.4 women in every thousand gave birth to multiple children with 132 having triplets and 9,873 having twins, claims MultipleBirths.org.

Phool’s birth is not the only surprise to have faced women this year.

In August, Lavinia Stanton, 23, went into labour on a night out at a cocktail bar.

She hadn’t known that she was eight and a half months pregnant!

The youngster, from Halifax, West Yorkshire, got "the shock of her life" when she unexpectedly welcomed baby Willow into the world.

She was rushed to the labour ward after experiencing cramps and welcomed baby Willow, weighing 6lbs 1oz, via c-section at 8:54am.

How would you react to having quintuplets? Tell us in the comments…