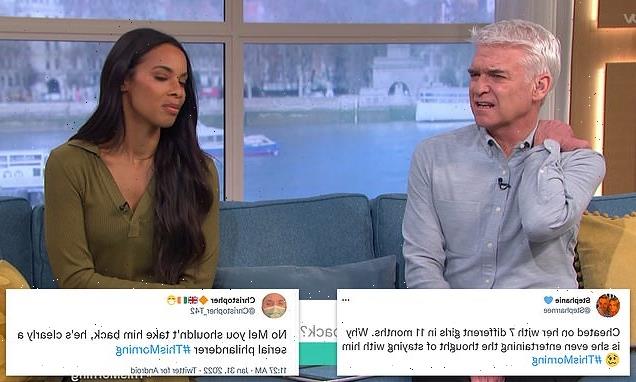 A woman has been urged to dump her boyfriend after revealing he cheated on her with seven women in the months after she gave birth to their first son.

New mum Mel called in to This Morning’s advice segment where she asked agony aunt Deidre Sanders whether she should consider taking back her boyfriend.

She revealed that in the eleven months after she gave birth, her partner had managed to sleep with five other women while speaking to multiple others over the phone.

Mel, who suspects her boyfriend of three years could have slept with even more women, says her partner is pressuring her to go back to him ‘for the sake of their child’.

Viewers were left horrified after hearing Mel’s story, urging the new mother not to get back with her unfaithful partner, who they branded a ‘serial philanderer’. 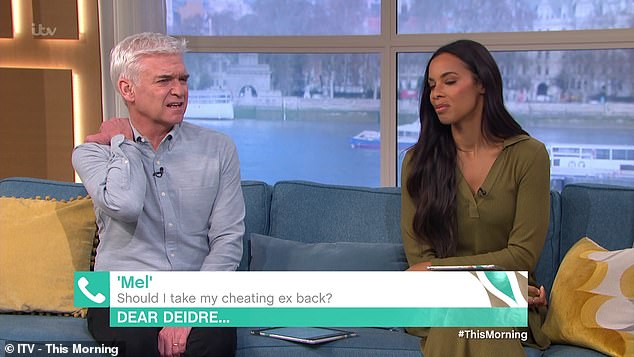 ‘I just found out my boyfriend was cheating on me with seven other girls since we had our son,’ explained Mel.

‘He’s now saying he wants to give it another go and that I should do it for the sake of my son – give him the family he needs. I just don’t really know how to take that or what to do.’

Mel said that while she and her partner had minor problems in the relationship, his cheating came as a total shock.

‘There was always sort of bumps in the road but I thought we were fine,’ she said. ‘That’s what was confusing about the whole thing.

Viewers were left horrified after hearing Mel’s story, urging the new mother not to get back with her unfaithful partner, who they branded a ‘serial philanderer’

‘In the end I just had a gut feeling. I went through his phone and messaged some of the girls and some of them he works with. So it wasn’t very hard to find out what was going on.’

Mel’s partner has slept with five women that she knows of, however she suspects there could be more because she only viewed his phone messages from April last year.

‘Some girls he’s met, some it’s just been texting over social media, but it’s all quite raw and it’s not very nice’, she said.

‘He’s saying he’s sorry. He’s admitted to everything he couldn’t deny, but I’m worried there’s more to the story’.

Hosts Rochelle Humes and Phillip Schofield were horrified by the story, with Deidre advising either seeking the help of a therapist or ending the relationship entirely. 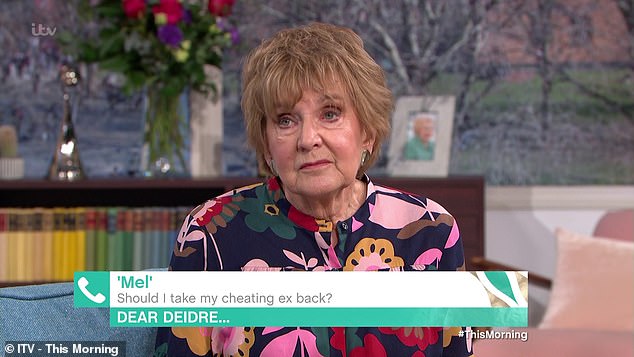 New mum Mel, from the UK, called in to This Morning’s advice segment where she asked agony aunt Deidre Sanders whether she should consider taking back her boyfriend 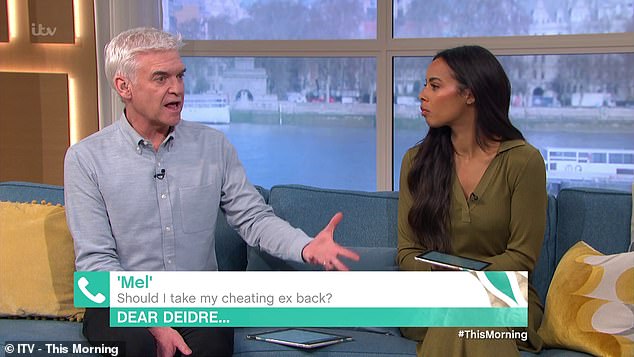 Hosts Rochelle Humes and Phillip Schofield were horrified by the story, with Deidre advising either seeking the help of a therapist or ending the relationship entirely

‘If you really are going to find it hard to separate then go and see a counsellor together,’ she said.

‘There’s no way you can let this carry on and accept his word when he’s been so deceitful in the past. There’s the sexual health risk too, Either insist on counselling or I think you have to say, “This isn’t going to work”.

‘It’s only good to stay together for children when you can make it a good relationship, where you’re going to be happy together.’

Viewers were quick to take to Twitter with their views, with one writing: ‘Cheated with SEVEN girls and you’re ringing to see if you should take him back? GET RID’.

Another said: ‘Mel ‘my husband has been cheating with 7 different girls shall I take it him back? ‘ LOL, no.’

‘Cheated on her with 7 different girls in 11 months. Why is she even entertaining the thought of staying with him’, commented a third.

A fourth weighed in: ‘@RochelleHumes there trying not to scream “the cheating f***in rat” on live television while that caller says her fella cheated on her 7 times while she was pregnant.’