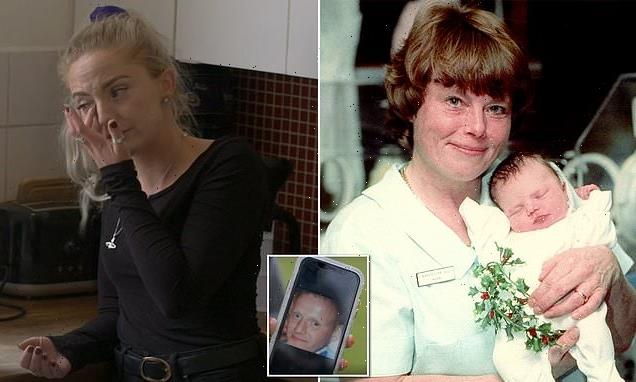 Heartbreaking moment woman, 26, who was abandoned in a hospital toilet as a newborn and never found her mother breaks down as she learns her birth father has died – and he lived just six miles away for 20 years

A woman who was adopted after being found wrapped in a blanket in a hospital toilet cubicle as a baby broke down after she learned her birth father had died during a TV search for her biological parents.

Leah, 26, whose surname was not given, was abandoned by her birth mother on a toilet cistern at Wythenshawe Hospital, south Manchester, on December 29, 1994.

The discovery of the three-day-old baby sparked a search for the mother but she was never identified.

More than two decades later, Leah, who was adopted at four months old by Debbie and Andrew of Greater Manchester, launched a fresh search for her birth parents in TV documentary Our Lives: Finding My Family, which aired last night on BBC1. 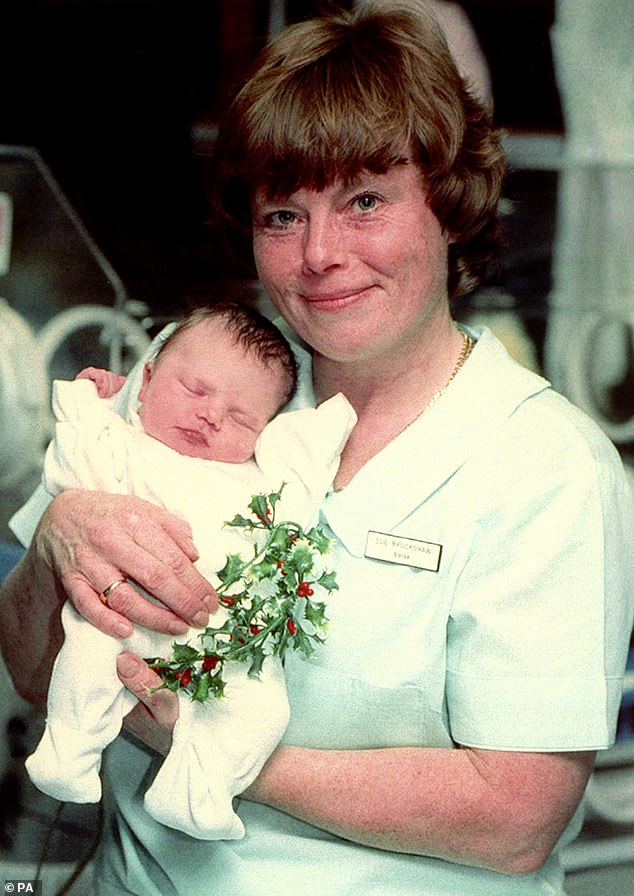 Abandoned as a baby: Leah, whose surname was not given, was abandoned by her birth mother on a toilet cistern at Wythenshawe Hospital, south Manchester, on December 29, 1994. Pictured, Leah as a baby with one of the nurses. She was named ‘Holly’ by hospital staff 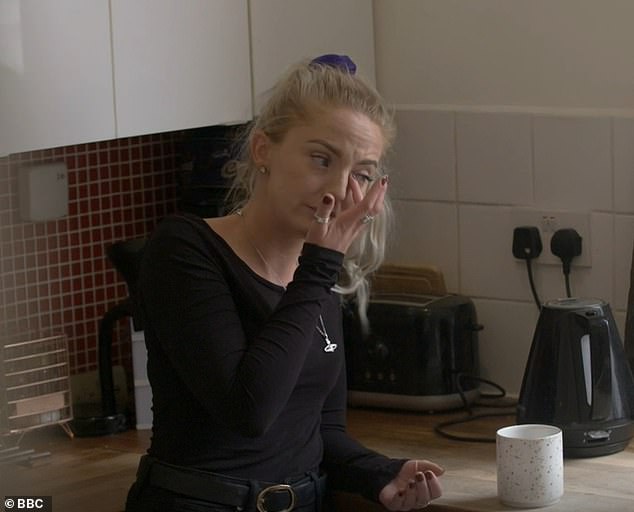 Difficult news: Leah launched a fresh search for her birth parents in TV documentary Our Lives: Finding My Family, which aired last night on BBC1. She broke down (pictured) when she learned her father was Lee Penney, a man who had died in 2014 just before his 40th birthday 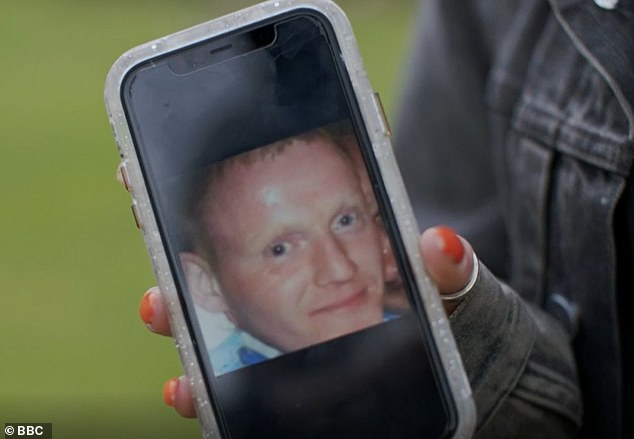 Connection: Leah said seeing a photo of Lee (pictured) gave her a sense of belonging but admitted it was difficult not being able to ask him if he was proud of the woman she became

Filmed over three years, the programme tracked Leah’s journey as she carried out online DNA tests in the hope of finding a match on an online database.

After false starts, Leah was matched with a first cousin once removed and through him was able to find her paternal grandmother and, eventually, her father.

But she was dealt another blow when she learned her father, Lee Penney, had died in April 2014 after suffering a seizure shortly before his 40th birthday.

He had lived just six miles from Leah and her family for more than 20 years.

‘It’s good that we know,’ Leah said, tearing up at the discovery. ‘But I think it’s just a little bit hard because he’s passed away. It feels a bit like too little too late.’

Leah was discovered by staff at Wythenshawe Hospital shortly before New Year’s Eve in 1994.

Doctors believed the baby, named ‘Holly’ by nurses, was approximately three days old at the time she was found. Due to the circumstances, police believed the mother was likely a teenager or young woman, but no details about her were ever revealed. 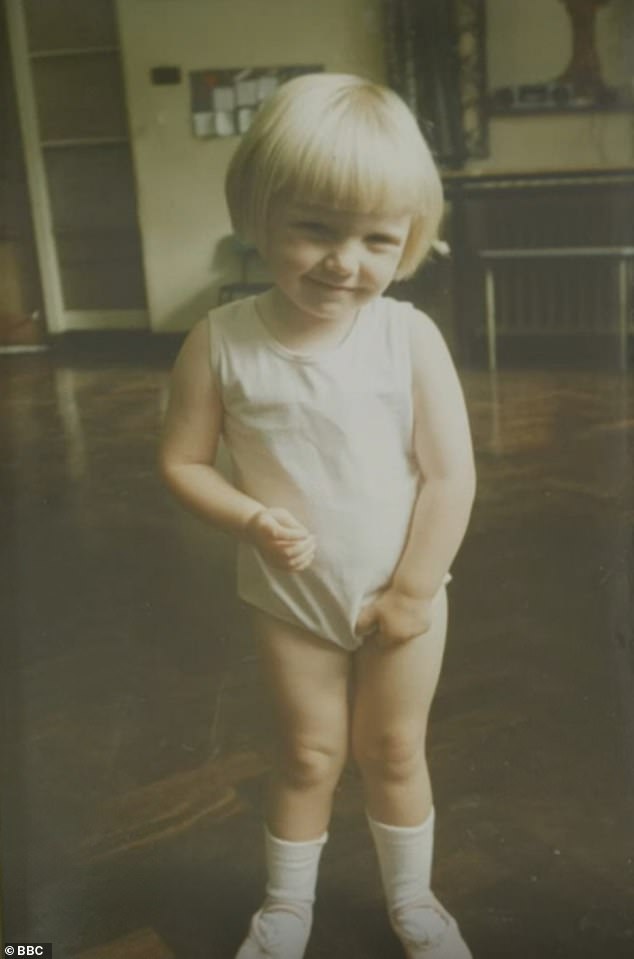 Uncertain beginnings: Leah as a child. Due to the circumstances, police believed the mother was likely a teenager or young woman, but no details about her were ever revealed 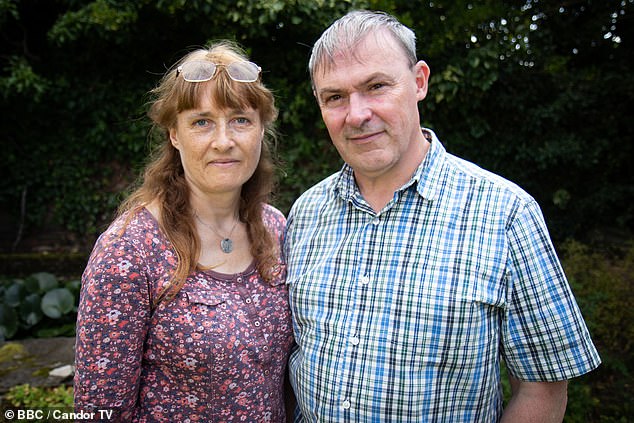 Adopted parents: Debbie and Andrew, pictured, who already had one adopted daughter and wanted to adopt another, saw coverage of ‘baby Holly’ on the news. They adopted her at four months old and gave her a ‘love-filled life’, but understood her desire to find her birth parents

Debbie and Andrew, who already had one adopted daughter and wanted to adopt another, saw coverage of ‘baby Holly’ on the news. The baby was placed with them four months later.

‘I have had a very love-filled life,’ said Leah. ‘I’ve not gone without. Mum and Dad have loved me. I have been part of a family, I’ve not felt ostracised or pushed out, at all. But there is always something that is not quite there.’

Debbie added: ‘I do remember her wanting to search for her birth mum from when she was quite young… I can feel that hurt, from feeling she was abandoned. That drive to find out what happened is so strong.

‘And then the other part of me thinks “well, I’m your mum now”… As a parent you want to fix things for your children. And that’s something I couldn’t fix.’

Leah, who is a mother to two boys, said she needed to know why she was abandoned, because she couldn’t imagine leaving her own children. 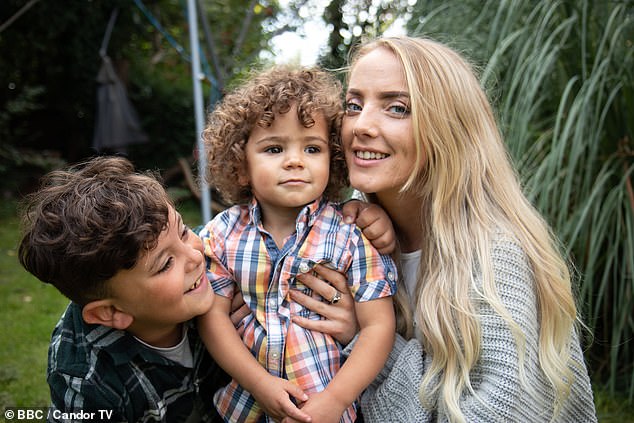 Needing answers: Leah, who is a mother to two boys (pictured), said she needed to know why she was abandoned, because she couldn’t imagine leaving her own children

‘Not knowing even the basic facts of where you came from does have a knock on effect on everything else,’ she said. ‘I’m at a point where I have to get the answers.’

The mother-of-two has previously tried to find her birth parents without success but hoped new online DNA databases might hold the key.

The first match was a third cousin, meaning they share the same great-great grandparents. It meant it would be almost no way to fill in the gaps in the family tree.

But after months of waiting, Leah’s DNA received another match: this time it was a first cousin once removed named Robert.

‘He was born and bred in Wythenshawe, in and around the hospital where I was left. I could have passed him in the street and not known… That’s close.’

With Robert’s help, Leah pieced together the family tree and learned one of her parents was from a large Catholic family in Wythenshawe.

The DNA results suggested one of Robert’s seven maternal aunts or uncles might be Leah’s grandparent. 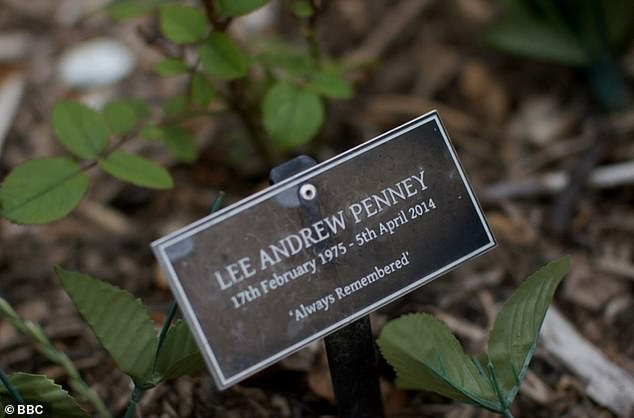 Piecing together answers: DNA results were enough to determine that Lee Penney was her father and had lived within a few miles of her for decades. He died in 2014

Leah decided to start by looking into the family of Robert’s youngest aunt, Christine, whose sons would have been young adults at the time Leah was born, making it possible they could have fathered a child with a young mother.

Christine was willing to take a DNA test and five weeks later, Leah learned she was in fact her grandmother.

‘Oh wow, I’m a bit shocked to be honest,’ Christine said, when Leah phoned with the news. ‘You’ve got a lot of cousins and aunties and uncles, you’ll get a shock when you see them. We’ll have to meet up and have a talk. That’s good news, isn’t it?’

The results meant one of Christine’s four sons, from two different relationships, was Leah’s father. But she also revealed that her youngest, Lee, had died years before.

Just two of the three surviving sons was willing to take a test, but the results were enough to determine that Lee was her father and had lived within a few miles of her for decades.

‘Am I supposed to feel sad for someone I don’t know?,’ Leah asked, visiting her father’s grave. ‘Is it normal to feel like you’re grieving for someone? I don’t know him. Something hurts, but I don’t know what hurts, or why. 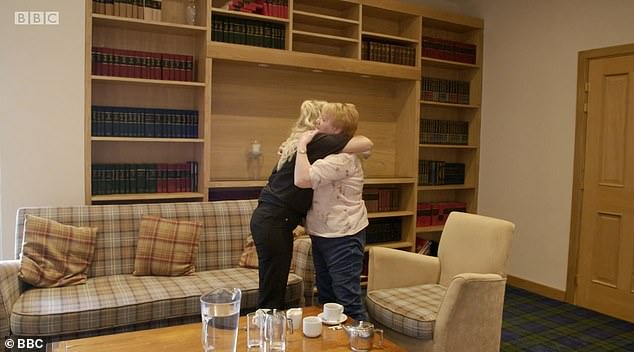 Family: Although she was unable to meet her father, Leah was still able to travel to John O’Groats to meet Christine, who greeted her granddaughter with a warm embrace, pictured

‘He actually looks quite a lot like me. To look like someone, it’s that little sense of belonging somewhere but it’s what I’m not ever going to be able to find out from him… Am I what he would hope for from a daughter? Is he proud of me? And then the obvious questions about who is my Mum.’

Although she was unable to meet her father, Leah was still able to travel to John O’Groats to meet Christine, who greeted her granddaughter with a warm embrace.

‘You are like Lee,’ Christine said. ‘He was very clever at his work and his drawing was fantastic.’ Leah shared: ‘I’m quite arty in that sense, I draw a lot.’

However Christine was not able to shed any light on the identity of Leah’s mother.

Before they parted, Christine presented Leah with a bracelet Lee had gifted her.

‘I had nothing that tied me back to who I was,’ said Leah. ‘Now I have something. It’s personal, it’s nice.’

Our Lives: Finding My Family is available on BBC iPlayer