Katherine Shearer is company manager of Pop-up Globe, the world’s first full-scale temporary working replica of Shakespeare’s second Globe, built and opened in 1614. Pop-up Globe is in Sydney for its second international season, at The Entertainment Quarter, Moore Park, with a bill of four Shakespeare plays: A Midsummer Night’s Dream, The Merchant of Venice, The Comedy of Errors and Macbeth.

For Katherine, who’s responsible for a multitude of logistical tasks required to keep the show on the road, no two days are alike. 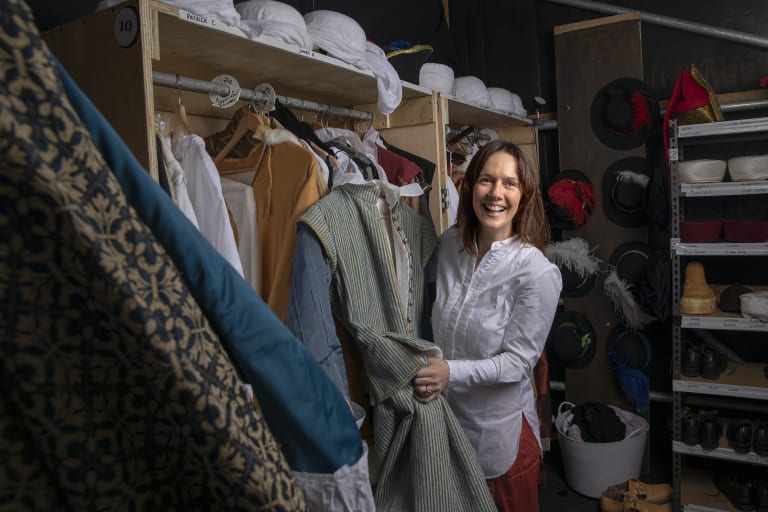 Katherine’s alarm goes off much earlier than usual, thanks to a request late the night before from a major TV network for an 8am morning weather report live cross, featuring Macbeth’s three witches.

The witches, played by Romy Hooper, Julia Guthrey and Mia Landgren, don full costume, which includes head-to-toe with ‘mud.’ “It’s actually a cocoa and butter mix, so we have to lay sheets in the back of the hire car to make sure there’s no mess,” says Katherine.

Media calls often come in at the last minute and it’s Katherine’s job to ensure they happen smoothly. ‘One morning, we had a group of actors in costume ready to go, and our TV slot was changed. The actors couldn’t make the later slot, so I had to step in – before my first coffee! I looked as shell-shocked as I felt,” she says.

Katherine accompanies an actor with a strained calf muscle to Darlinghurst Medical Centre. Strains, bumps and bruises are part of life for the Pop-up Globe performers. “These guys do quite a bit of jigging on stage, and that’s quite hard on the calf muscles,” says Katherine. “And in the cold weather it’s been worse, even though they do extensive warm-ups.”

Soothing and supporting the hardworking performers is a major part of Katherine’s job. “You have 30 actors – 15 in each of the two companies – all living independently in Sydney away from family, loved ones, routines, creature comforts, habitual local spots, all negotiating a new city, their finances away from home, performing in an outdoor theatre with cold, wind, heat, and highly physical performances,” she says.

A former actor, Katherine understands the stresses of stage life. “Being a company manager is like being a mum to everyone, at times,” she adds.

Katherine grabs some desk time in her office just behind the theatre. “I have a lot of admin work to do, but you don't know what to expect from day to day; some days you get 20 emails done, the others nothing, because there’s so much happening to deal with. This job is varied, and that's why I like it.”

The first performance of the day has begun, and Katherine is monitoring the skies closely. Clearly, nobody told the Sydney weather that the play on Pop-up Globe’s stage today is A Midsummer Night’s Dream, not The Tempest. The heavy rain looks like it could bring things to a halt – and it’s happened before. “We had to cancel the opening night of The Merchant of Venice,” says Katherine.

Colleagues are calling Katherine from off-site, even overseas (from Pop-up Globe’s New Zealand headquarters) for live updates. “I have to feed the information to the people who make the decision to cancel the show,” she says. “I’m talking to front of house, making sure they’re prepared if there has to be an evacuation; I'm ensuring that the stage managers know what’s happening. It’s a scary thing because you’re there on site, with 800 children in the auditorium and you feel anxious.” 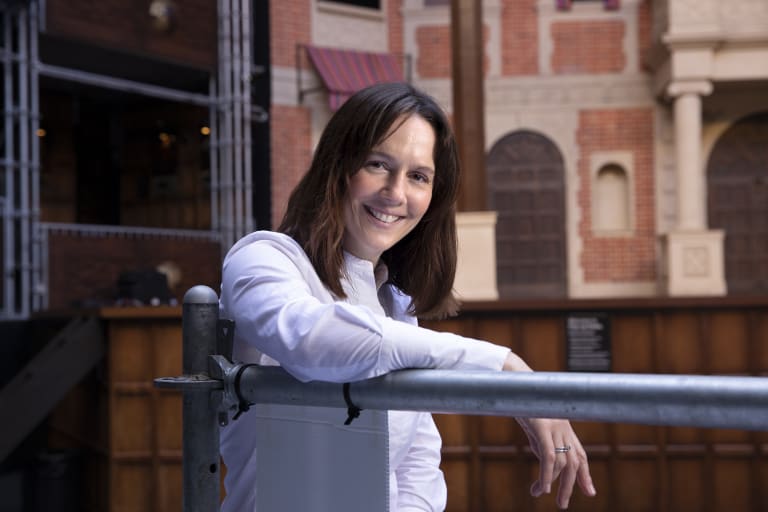 Katherine Shearer thrives in her role as company manager of Pop-up Globe, the world’s first full-scale temporary working replica of Shakespeare’s second Globe. She is pictured here on the Pop Up stage at EQ, Sydney. Credit:Quentin Jones

The show goes on, but the rain’s still causing problems for Katherine. The area under the Pop-up Globe’s stage, known as ‘Hell’ by the company, is becoming more swamp than inferno. “The fairies were wading through with bare feet, says Katherine, “so we’ve put planks in to walk on.”

Meanwhile the area above – the ‘Heavens’ – has sprung a few leaks and Katherine positions buckets beneath. The quick thinking crew improvise with repurposed items such as old guttering, and the show proceeds safely.

The Pop-up Globe is as authentic as possible to the 1614 original – no amplification, air conditioning or heating – and now the modern portable toilets have decided to add to the Jacobean vibe by breaking down and emitting an odour worthy of the era of open sewers. During the wait for a contractor, Katherine finds herself wading in, trying to fix the malfunctioning pumps.

All is well soon after, but it’s an example of the eclectic nature of her job. “Some days you just have to live with shit!” she laughs.

After a long, busy day, Katherine stops for a moment to take in some of the electrifying performance. “The beauty of this job is watching 30 talented beings each week on the stage plus two fantastic musicians, and the audience’s reaction,” she says.

“I know they put their heart and soul on the line on stage. I often have tears of joy in my eyes watching the shows, for the sheer delight of being part of such a company that I see bringing audiences smiles, gasps, laughs and an unforgettable experience. I have to pinch myself I get paid to do that!

Pop-up Globe, the world’s first full-scale temporary working replica of Shakespeare’s theatre, the second Globe, has popped up at The Entertainment Quarter Moore Park. Book now to enjoy the extraordinary experience of Shakespeare like it's 1614. Tickets are selling fast, the season closes on December 16, and many dates are already sold out. Book now for A Midsummer Night’s Dream, The Comedy of Errors, Macbeth and Merchant of Venice at popupglobe.com.au.