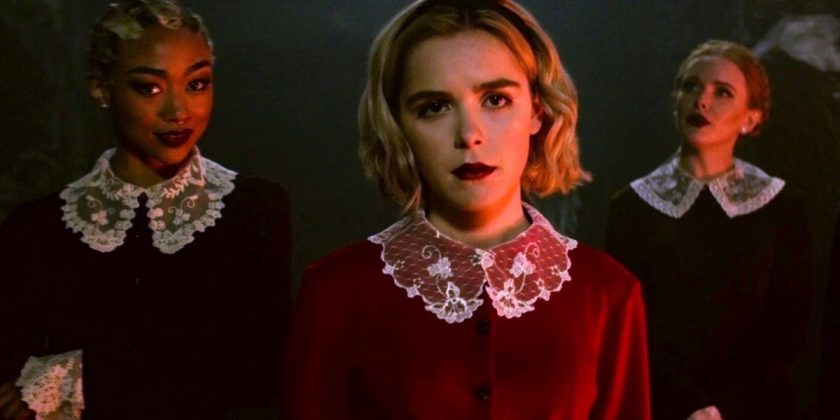 The Chilling Adventures of Sabrina holiday special delivered so much more than just a fun standalone episode. Sure, there were a couple one-and-done Christmastime stories, but the special also surprised fans by actually advancing the plot from the Season 1 finale and teasing the direction that Season 2 could go in. One of the most curious scenes comes at the very end of the episode, and it has every fan wondering if it is meant to set up a major twist for Season 2. So, will Chilling Adventures of Sabrina Season 2 include an antichrist? Let’s go over this creepy new theory.

Spoiler alert: This post includes spoilers from Chilling Adventures of Sabrina Season 1 and Chilling Adventures of Sabrina: A Midwinter’s Tale. The newly released holiday special did some important things to set up Sabrina‘s upcoming second season. One of the big things was the exploration of Sabrina’s relationship with her friends since coming out as a half-witch. The Season 1 finale left her mortal relationships unclear after she revealed her magical truth, but the special showed that although Roz and Susie are still uncomfortable about their friend being a witch, they still hang out with Sabrina. Harvey, on the other hand, tells Sabrina that he wants nothing to do with her magical side, driving the former couple apart even more.

The special also shed some light on Father Blackwood’s newborn daughter, whom Zelda secretly kidnapped to save from her father. We now know that Zelda named the baby Letitia, and after a close call with the child-hungry witch Gryla, Zelda decides it will be best to have Letitia stay with the excommunicated forest witch Dezmelda rather than at Spellman Mortuary.

But what we really need to talk about is the final minute of the special. At the very end, we see a twisted version of the three magi from the biblical story of Jesus’ birth, as three demons carry gifts into a wintery night. 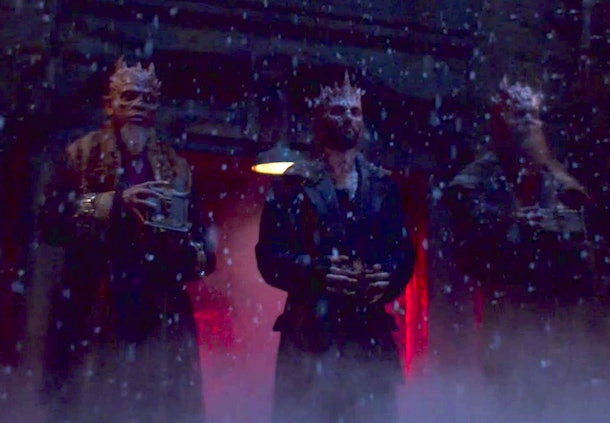 Was this just an extra little spooky twist on Christmas tradition before the end of the special, or could this mysterious scene be teasing a major arrival for Season 2? After all, if this is a demonic version of the nativity story, then it only stands to reason that these three gift-bearers must be heading towards some satanic version of Jesus: the antichrist.

It definitely is not too far-fetched to believe that Chilling Adventures of Sabrina would introduce an antichrist character — Satan himself is a major character in the show, after all. Some sort of antichrist birthing ceremony would also explain a lot of the things that happened in the holiday special. Remember how Miss Wardwell tries praying to the Dark Lord at the beginning of the episode but receives no response? That could be because Satan was busy getting ready for his offspring to enter the world.

Also, both Father Blackwood and Nick Scratch were notably absent during the entire special. It’s easy to imagine that Father Blackwood would definitely be present at the birth of the antichrist. This also makes Nick seem super suspicious — Prudence mentions that he was off to the "unholy lands" for the holidays. Could these unholy lands be where this antichrist stuff is taking place? And if so, then how is Nick involved in it all… can he really be trusted?

We will have to see what satanic horrors Season 2 of Chilling Adventures of Sabrina has in store for us when it premieres on Netflix on April 5, 2019.