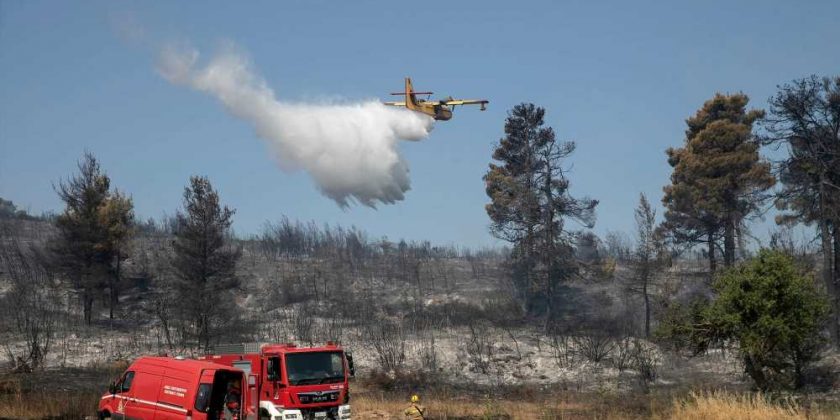 Southern Europe battles wildfires as north cleans up after floods

Greece to require proof of COVID vaccination at indoor restaurants

STAMATA, Greece — A wildfire north of Athens swept through a mountainous pine forest Tuesday, seriously damaging at least a dozen homes and burning cars before being contained by an intense firefighting deployment, officials said.

The blaze prompted authorities to evacuate homes around the Stamata area, 18 miles northeast of the capital, while the flames sent smoke over Athens limiting visibility in parts of the city.

Eight water-dropping planes and 12 helicopters were being used Tuesday to fight the blaze, joined by more than 300 firefighters on the ground.

“It was a difficult and dangerous fire,” Civil Protection chief Nikos Hardalias said.

“Fire crews had to operate between inhabited areas and between homes … The fire is currently receding, but is still burning at several different sites.”

A leased Russian Be-200ES firefighting plane was used in the effort Tuesday as well as two Greek army helicopters fitted with water-dropping buckets.

Residents in the area received cellphone alerts and were being urged to keep doors and windows closed to avoid exposure to smoke and prevent hazardous sparks from blowing inside homes.

Authorities said the cause of the fire wasn’t immediately clear, adding that local reports of arson were being investigated. Four people were detained for questioning, Public Order Minister Michalis Chrisochoidis said without providing further details.

Fires near cities are often blamed on arson to clear forest land for illegal development.

The fire department is currently on alert in several parts of Greece with a heat wave expected through Friday with temperatures expected to reach over 109 F in central Greece.

Tuesday’s fire was contained following a lull in strong winds.

Deadly wildfires in greater Athens three years ago killed more than 100 people and left over 1,000 homes destroyed or seriously damaged.