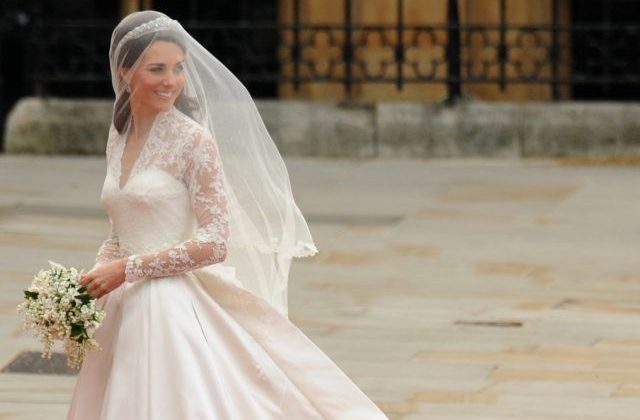 Kate Middleton married Prince William in 2011, and it drew 23 million television viewers in America alone. There is a lot to remember from that day, but one thing sticks out in many people’s minds: Kate’s regal wedding dress. The Duchess of Cambridge’s 2011 gown cost an unbelievable $434,000. Here’s how that price tag came about.

Kate’s dress was branded as an Alexander McQueen, which adds cost to the gown on its own. Alexander McQueen is extremely expensive — any standard dress on the website could easily cost more than $3,000. The wedding dress was custom and designed by Sarah Burton, Alexander McQueen’s creative director. The gown was Victorian-inspired and narrowed at the waist, drawing on the tradition of Victorian corsetry, the Palace said in a statement. Any custom made gown will easily cost more than one purchased in a store. Both the brand and its one-of-a-kind design drove up the price.

It featured a nine-foot train and handmade lacework

The fact that Kate’s gown was custom was only one reason why it was so expensive. It’s the way the dress was made that resulted in the bulk of the costs. It featured a nine-foot train, which was infamously held by Pippa Middleton (and part of the reason some say Pippa stole Kate’s spotlight). The extra material made for a dramatic entrance and definitely upped the cost. It also featured lacework that was entirely handmade. The Royal School of Needlework, based at Hampton Court Palace, used a special Irish technique known as Carrickmacross to create the lace pattern. According to Town and Country Magazine, the lace designs on the dress included hand-cut roses, thistle, daffodils, and shamrocks. Kate’s veil was also created at the school.

Almost all materials were supplied by British companies

Kate chose a British designer, but she also chose nearly all British-made materials, too. The dress paid homage to British craftsmanship. The entire gown was designed and made in England. However, Town and Country reported that the dress did feature both English and French Chantilly lace, so Kate did source outside of the United Kingdom a bit. But for the most part, she stuck with the U.K. for every part of the dress, from its design to its creation.

It may seem as though the only family that could afford a dress so regal would be the royal family. However, reports have said that Kate’s parents, Michael and Carole Middleton, actually footed the bill for the $434,000 gown. Kate’s family also owns an online party supplies business, which Time has reported could be worth up to $50 million. It’s unclear how much of the wedding the Middletons actually paid for, but it does make British taxpayers feel better knowing Kate’s dress cost didn’t come out of their pockets.

Kate Middleton had, far and away, the most expensive dress of any modern day royal wedding. People have reported that both Meghan Markle and Princess Eugenie’s dresses cost somewhere between $135,000 and $260,000, still very far off from Kate’s staggering cost.