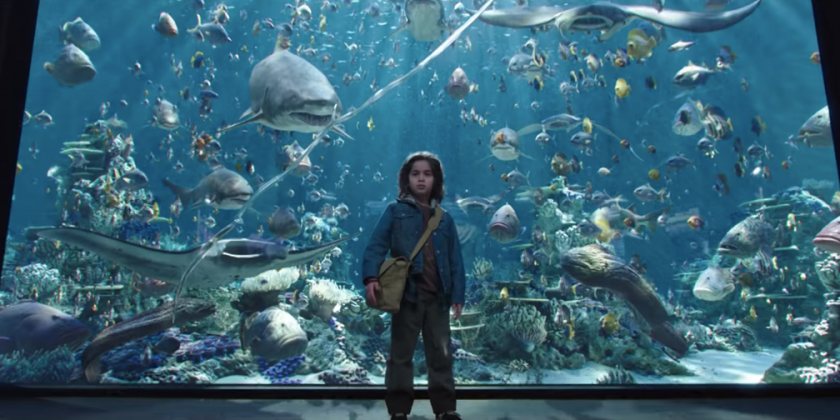 In the DC Extended Universe, Arthur Curry is already a hero on land. But in Aquaman, out Dec. 21, the destined prince must go home again and be the hero the ocean needs. Sure, the blockbuster film has evil siblings, epic quests, and all the action you’d expect from a superhero adventure. However, there’s also an environmental message in Aquaman that may make you side with the bad guys. Aquaman star Jason Momoa and Patrick Wilson, who plays the antagonist Orm, explain during a New York City press day how their conflict in the film has real world implications.

"There’s some themes about the environment that I really want [audiences] take away from it because it’s really a mirror of our society/modern times right now without being preachy," says Momoa, who is an environmental activist himself.

He’s right — it’s not overt in the film. Mostly, the environmental message is just under the surface — no pun intended — but part of the reason Orm is coming for the land is because of pollution. His villainy is backed by more than just "family turmoil," Wilson says.

"You see his very real and understandable issue with the environment in the way that the surface world has treated the oceans, which is of course where he lives," the actor explains. "So he wants to get at least four of the seven underwater kingdoms to take on the surface because he’s tired of the pollution and the destruction that they’ve done to the ocean."

There’s also one absolutely haunting shot of trash in the ocean that will hit you just as hard as any of the movie’s action scenes or emotional moments. In the real world, pollution is a huge and largely untouched problem that’s only getting worse. It makes Orm sympathetic in his grudge against land-dwellers, even if he’s going about it the wrong way.

"I loved the way [Wilson] played it because you know he plays the atypical bad villain," says Momoa. "The view is that if […] we lived under water and someone’s polluting our children and grandchildren, we’re gonna fight back. Right? I think there’s a lot of people are just going to go, ‘Yeah, absolutely agree with what guy’s saying, even though it’s maniacal. There’s things I don’t agree with, but if you’re hurting our people, we’re going to fight back.’"

Of course, what Orm isn’t counting on is that not only does Arthur come from two worlds, he cares about both worlds. He won’t just fight back against Orm and the sea kingdoms. He wants to unite everyone.

Environmental issues also come up in some key philosophical banter between Arthur and Mera, Amber Heard’s character, who hails from Atlantis. Despite recruiting him to stop Orm from waging war on land, Mera is not a big fan of humans and what they’re doing to her home either. Arthur feels the need to convince her that humans are not all bad.

"You slowly pull each other’s layers away, and they’re showing each other their own worlds and that’s a beautiful thing," Momoa says. "These vulnerable moments where she actually gets to see [different] sides of Arthur — because truth be told Mera’s way stronger than Arthur."

Sure, on one side Arthur is goofy, confident, and ill-prepared to rule 70 percent of the ocean, but his humanity and empathy towards Mera helps put him on the path to save the day. Arthur may be half-human, but he’s not unaware of what we’re doing to the environment.

"75 percent of the world is water," Wilson says, "I think if you had the option to live under water, I probably would too."

If that were an option — and if the vastly creative and fascinating world of Aquaman were real — we’d probably treat the oceans a lot better than we are now. Hopefully this film can make some kind of difference, even if it starts small.