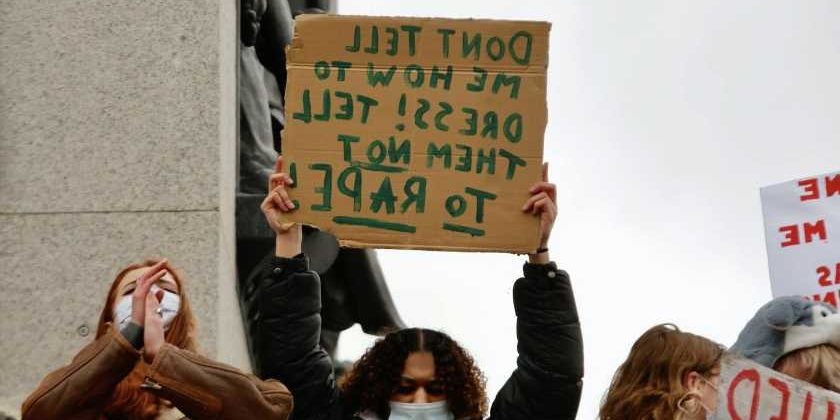 We’re still calling on the government to invest in challenging the harmful attitudes at the root of male violence against women – here’s how you can get involved.

Throughout 2021, Stylist has been calling on the Home Office to create a long-term, culture-shifting public campaign that challenges the misogynistic beliefs and behaviours behind male violence against women.

We aren’t under any illusions that this will be a quick fix. We live in a society where male violence against women is routinely normalised and minimised. Where police officers share photographs of Black women’s dead bodies over WhatsApp. Where a city council leader says “everybody has a responsibility to try to not put themselves in a compromising position” after the apparent murder of another young woman. Where 79% of girls aged 13 and above say sexual assault happens “sometimes” or “a lot” between their school peers.

“We’re calling on you to act now”: read Stylist’s open letter to Priti Patel about ending male violence against women and girls

It’s hard to overhaul a culture where dangerous misogyny so often continues unchecked, and the blame for male violence is so regularly placed at the door of women and people of marginalised genders. But the government has to work towards that goal – no matter how difficult it might seem. That’s not just a matter of opinion, either: the UK has clear obligations under international law to proactively prevent violence against women and girls, not just punish it after it’s already happened.

That means focusing seriously on boosting conviction rates for crimes such as rape and domestic abuse, and making dramatic improvements to sex and relationships education in schools. But it also means challenging cultures among adult men.

“There are three prongs to tackling violence against women: prevention, protection [of survivors] and prosecution,” Professor Sundari Anitha, a professor of gender, violence and work at the University of Lincoln, tells Stylist. “At the moment, responses are still disproportionately focused towards the prosecution of perpetrators. What would be useful is a greater focus on prevention and shifting the broader culture.”

Photos of victims of male violence outside New Scotland Yard in London on the International Day For The Elimination Of Violence Against Women, 25 November 2021

The government insists it is committed to stopping male violence against women before it starts. But many experts are unconvinced, with the End Violence Against Women coalition recently calling out Chancellor Rishi Sunak for failing to allocate any meaningful funding to prevention work in his autumn budget. And despite announcing in July that a key pillar of its prevention strategy would be a communications campaign targeting and challenging perpetrators of violence against women and “harmful misogynistic attitudes”, the Home Office has yet to commit to any further details.

We still don’t know, for example, when the campaign will launch. We don’t know what it will say. We don’t know how its message will be communicated to the men who most need to hear it. But we do know we can’t afford for the government to get this wrong.

That’s why we’re writing once more to Home Secretary Priti Patel, asking her to commit publicly to ensuring the forthcoming campaign is long-term, informed by the expertise of Black and minoritised women, and supported by meaningful investment in other forms of prevention work.

Wondering why these points are so important? Here’s what the experts say. And if you want to join us in writing to the Home Office, you’ll find a useful template email below.

Ultimately, we’ll never prevent male violence against women without challenging men’s deeply held attitudes and beliefs about gender roles, power and sex. It won’t be easy – but it’s essential that we try.

Adapt this template email and send it to [email protected]

As a supporter of Stylist magazine’s initiative #AFearlessFuture, I welcomed the Home Office’s announcement that the government would be launching a national communications campaign designed to challenge harmful misogynistic attitudes and target perpetrators of violence against women. Changing men’s beliefs and behaviours is essential if we are to prevent male violence against women, and experts agree that high-profile public campaigns can be vital in laying the groundwork for culture change.

However, I’m disappointed that the Home Office has not made any further commitments about this campaign since July. This year has highlighted the devastation caused by male violence against women. We can’t afford to wait indefinitely for meaningful investment in preventive measures.

That’s why I’m asking you to make the following additional commitments before the end of 2021:

If these vital criteria are not met, any awareness campaign risks being ineffective at best, and counterproductive at worst. The Home Office must take them on board, and make this campaign an urgent priority.