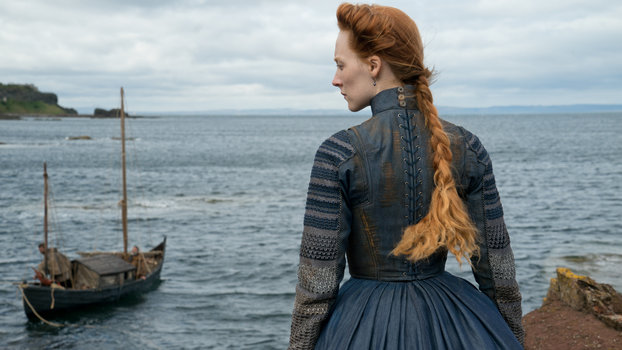 Royal period pieces are in — that much is made apparent by the two female-driven historical dramas establishing their box-office reign nationwide.

Both films stray from the historical script, and while The Favourite does so through the manipulation and embellishment of courtly gossip, Mary Queen of Scots chooses to edit the past with a more-established set of tools: a needle and thread.

“What the script gives you is straight away that this is not going to be a drama documentary, as in terms of historically these two queens never met. So one’s liberated from total historical loyalty through the nature of the script,” Scots’s costume designer, Alexandra Byrne, told InStyle. “What I felt about the film as a whole, is that I didn’t want it to be a kind of revolving door of ‘here comes another queen in another frock.’ I wanted to try to limit the fabrics I was using so that I was manipulating the fabric to tell the story.”

Byrne, no stranger to the Elizabethan era (she won an Oscar for costuming Cate Blanchett’s Elizabeth in Elizabeth: The Golden Age), allowed the actions of rival queen, Mary Stuart (Ronan), to play a hand in the red-haired royal’s latest iteration (Robbie).

“She undertook one of the earliest PR exercises, I think,” Bryne says of the young Elizabeth I. “She understood the power of her image in what was newly protestant England, to replace the iconography of the Virgin Mary. So I wanted her dressing as the young queen to be strategic — she dresses outfit-to-outfit, appropriate to each moment. So I used color changes to show that she’s in outfit after outfit after outfit.”

Robbie’s young Queen isn’t immune to reports from Scotland, those that detail her cousin Mary’s beauty and youth. Amid her burgeoning jealousy, Elizabeth contracts smallpox, which issues another massive blow to her self-esteem. The hits keep coming, and a few years later Mary provides something she cannot: an heir.

RELATED: Emma Stone’s Organs Shifted from Corset-Wear, but That’s Not the Most Cringe-y Side Effect

“She’s very much under-the-radar then, which is then when I take all the color out of her clothes,” Byrne explains. “Until she knows that she’s going to be facing Mary, and she literally kind of drags herself up into an appearance she wants to put on for this meeting, because she feels so lesser than Mary in terms of beauty and power. You didn’t have Instagram — they had portraits and then they had reports, but they didn’t know what they were going to see when they saw each other.”

As for the titular Queen of Scots, her style takes a more pragmatic approach. “In Scotland the weather is a massive factor,” Byrne notes. “[Mary] was a very vigorous woman; she was out riding, she loved the countryside.”

Though the two Queens exhibit wildly different sartorial tastes, there’s one surprising element that unites them both: denim.

On her decision to work with the modern fabric (reminder: denim wasn’t invented until 1873), Byrne told us, “I wanted the clothes to have an accessibility and a modernity to them. I needed a fabric that had a very keen price-point, because we had to make everything on the film — every background character, everything. I wanted a fabric that got better with age and wear, so that the dirt [that was caked onto their clothes] became part of the decoration. There were no dry cleaners — their clothes would’ve been filthy, but I wanted that to add to the look of the clothes in place of them just being grubby.”

“Denim becomes kind of a juxtaposition of the period and the contemporary, and every costume is a fine balance of that — where do you put orange top-stitching, do you use ribbon, how much? What is the balance of the language of each costume?”