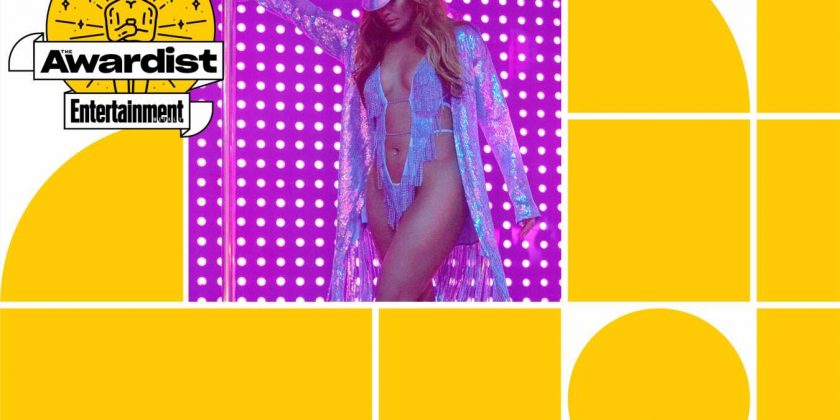 Jennifer Lopez knows how to make an entrance. The actress’ magnetic first appearance in Hustlers — a sultry, extended pole dance to Fiona Apple’s “Criminal” — is the buzziest scene in a film full of them, marking the transformation of a cinematic persona. Indeed, throughout Hustlers, Lopez is like you’ve never seen her. You can’t take your eyes off of her. She’s compelling, seductive, commandingly guiding the camera and holding the audience’s attention everywhere she goes. She’s a movie star.

Lopez and the Hustlers team has had plenty to celebrate recently: The film met an ecstatic response at its Toronto International Film Festival launch, generated strong reviews, and this past weekend, conquered the box office with a $30-plus million haul — the best opening of Lopez’s career, and a huge breakthrough for studio STX and director Lorena Scafaria (The Meddler). Faithfully adapted from Jessica Pressler’s New York magazine article, the film tracks a group of strippers pre- and post-2008 financial crash, who begin an elaborate scheme to stay afloat — and then some — by scamming horny Wall Street guys via increasingly dubious (and dangerous) methods.

In Ramona, the enigmatic but driven ringleader, Lopez has found her definitive role, a beguiling anti-hero well-versed in the powers of persuasion. Too many to count have called this the best performance of her career, and with that, the Oscar chimes are starting to ring. But there remain question marks: Can Lopez, who’s stuck mostly to fluffy rom-coms the past few decades, capture the Academy’s attention? And perhaps more importantly: Can Hustlers?

Such concerns speak to gendered bias in awards conversations: Hustlers is a slick, prestige con film of the sort that the Oscars tend to reward, though typically when fronted by a male cast. (Think The Usual Suspects.) And that’s to say nothing of the general derision often shown toward “stripper movies.” Yet as Hollywood continues to experience a sea change — as a movie like Hustlers, largely on the back of Lopez’s commercial appeal, can not only get made but thrive — it’s proving itself (tentatively) ready to embrace what used to be unfairly dismissed. This doesn’t mean to say Hustlers is on its way to a Best Picture nomination — but it’ll occupy a firm place in the conversation.

Put simply, Lopez has a lot going for her here — so much, in fact, that saying she isn’t the frontrunner at this stage, given the state of the field, feels a bit naive. (Lopez gives a clearly supporting turn opposite lead Constance Wu in Hustlers; in the unlikely event she campaigns for Best Actress, it’s a very different story.) For starters, the Academy loves a career redefinition: Mo’Nique proving she’s a dramatic powerhouse in Precious, Matthew McConaughey shedding pounds and finding soul in Dallas Buyers Club, and on. Lopez only benefits from the inevitable minimizing of her past screen work. Here, at last, she goes serious — and she does so brilliantly. It helps that like Mo’Nique and McConaughey, to stick with those reference points, Lopez will be gunning for her very first nomination.

Lopez’s work in Hustlers also allows her to showcase some impressive physicality. She’s in crazy-good shape here, and Scafaria has a habit of just holding the camera on the actress while she performs, particularly in that grand entrance, which is as much a demonstration of strenuous body work as anything else. Lopez knows when to live in her character’s skin — she doesn’t ring a false note — and when to show her work. There’s no laziness on display.

And I’d argue the field lacks a more obvious top contender than Lopez right now. Her toughest competition looks to be Laura Dern, a scene-stealer in Marriage Story. Most recently nominated for Wild, Dern is a beloved industry figure, and has a second meaty turn to bolster her case in the forthcoming Little Women. But unless you count Allison Janney’s monstrous — and relatively dramatic — I, Tonya role, comic work has found very little love in the category over the past 20-odd years. Other likely challengers in 2020 include Annette Bening, alternately uncanny and moving as Dianne Feinstein in The Report, and Once Upon a Time… in Hollywood’s Margot Robbie, but each face unique obstacles. (Film visibility in the former’s case; screen time and dialogue… amount in the latter’s.) Little Women may field a major player, whether Dern or Meryl Streep or, especially intriguing, the surging Florence Pugh; we’ve still yet to see movies like Bombshell and The Irishman, which contain possibilities too.

But perhaps the most convincing factor regarding Lopez’s Oscar chances is the success of Hustlers itself. In its combination of box-office gross and water-cooler appeal, it’s emerging as the fall’s breakout film. And despite its stacked cast and broad appeal, Hustlers feels like a bit of an underdog, having struggled through development and facing harsh judgment before premiering. Lopez considers herself part of that narrative. “My life and career are about not letting people put me in their box,” she recently told EW, “but being limitless in that I can do many things, and you don’t get to tell me what those are.” Jennifer Lopez, underdog? Hey, she knows how to play the part.