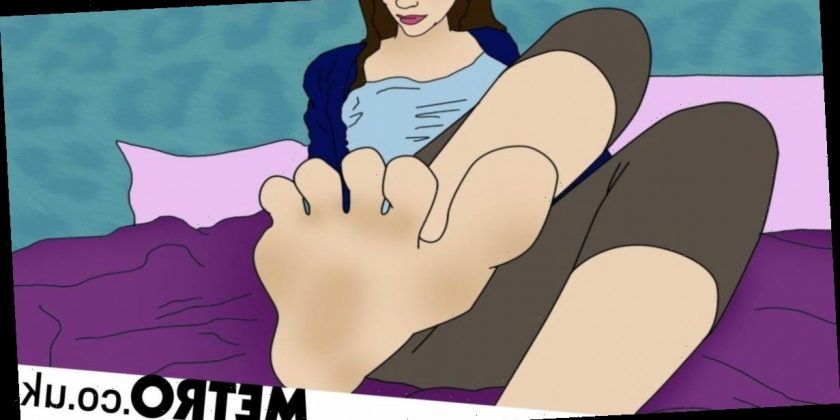 Sexual fetishes are nothing new, but in recent years stigma around them has lifted somewhat.

People are more open to talking about what turns them on, with communities forming on- and offline so that likeminded souls can share their kinks.

In honour of Feet Week, we have looked into podophilia, the official term for foot fetishism.

As with most sexual appetites, there is no one standard – what makes one podophile tick might not work for another.

Scientific research around this fetish is severely lacking, as much of it is connected to singular cases, as opposed to studies with multiple participants, which give a wider overview of why some people get frisky at the thought of feet.

But there is some insight. One study from 2007, which looked at the frequency of fetishes and involved 5,000 participants, showed that ‘feet and objects associated with feet were the most common target of preferences’.

So if you like sucking on toes or kissing your partner’s ankles, you’re not the only one.

Other findings reveal a (somewhat loose) link between foot fetishes and a person’s childhood, with studies into children who are obsessed and/or (physically) aroused by feet.

A foot fetish doesn’t necessarily have to be about the body part in itself, but rather what it represents – its position, i.e. at the bottom of a person’s body. Feet are used in dominance play, and in this scenario, the sexual arousal could be a result of the humiliation or submission associated with our trotters.

A global survey conducted by the sex toy company Lelo further confirmed that feet are a big deal in the sack, beating out hands, hair and even breasts as the top body part.

‘As far as we can tell, it’s always been common, and references to it appear in early literature and art across the world,’ says Stuart Nugent, the brand’s sex expert.

‘The third century sophist Philostratus wrote in a love letter, “O feet unfettered! O unhampered beauty! Thrice happy me and blessed, if on me ye tread!”

‘The reason why foot fetishism is so popular (and, yet, so under-discussed) is argued energetically by any number of specialists from all clinical backgrounds. ‘

According to Stu, there are three common lines of thought to explain our obsession with feet: the psychological, neurological and biological.

He explains: ‘A psychological school of thought suggests feet become fetishised because of early childhood imprinting and conditioning, where sexual responses are paired with non-sexual objects, like feet, very early in a person’s psychosexual development.

‘A neurological theory suggests that podophilia might develop because the feet and genitals occupy adjacent areas in the brain’s somatosensory cortex, and there might be some sort of neurological wires being crossed.

‘There’s even a biological theory that the characteristic scent of feet can trigger a hormonal reaction in some people. The truth is that the cause of foot fetishism is likely to include many different elements.

‘Whatever the reason or the cause, there seems to be one outcome that practitioners find particularly attractive: the sensation of dominance and submission that feet represent.

‘This is due to the prevalence of podophiles being straight men worshipping women’s feet: this implies a subversion of traditional sexual and cultural roles which may offer the fetishist a highly sexualised inversion of stereotypes, the subversive nature of which is translated into sexual excitement.’

However, Camilla Constance, a sex and intimacy expert, says that while podophilia is common among men for the domination aspect, this is a Westernised view.

What’s more, our trotters are an erogenous zone, which according to her, is a huge part of the appeal.

‘From a tantric or “wholistic sex” perspective, feet are an incredibly erogenous zone in the body capable of being orgasmic on their own or contributing to exquisite blended orgasms,’she says.

‘A woman-centric approach to sex would always include “foot worship” because feet are a part of her body, all of which would be worshipped.

‘It is only in the narrow, Western model of sexuality, with its emphasis on male erection and penetration, that worshipping feet is seen as odd or kinky in some way.

‘So what is a completely beautiful and honouring act becomes, in our sexually confused society, a “fetish” to hide.

‘I would challenge the assumption that we have areas of our bodies that are not sexual.

‘Our entire bodies, including our feet, are covered in networks of nerves that pick up not only touch, but energy, from other people. Feet have a particularly dense network of nerves making them particularly sensitive and potentially orgasmic.’

So, feet could lead to amazing orgasms – that’s one reason to like our trotters.

But Lucy Beresford, a psychotherapist who hosts a weekly phone-in sex and relationships show on LBC Radio, explains that podophilia is a more openly-accepted fetish for the simple fact that we’re so used to seeing this body part.

‘Foot fetishes are one of the more mainstream/popular fetishes mainly because everyone has feet, so we are used to seeing them, unlike whips or restraints,’ she says.

‘Nor do they have the negative connotations of, say, urine. Some people like the feet to be seen in sexy footwear like stilettos or boots, which again are mainstream products, unlike something like hand-cuffs.

‘A foot fetish allows for games of domination or submission to be played out using everyday objects.’

Speaking of objects, if you’re stuck in lockdown with no access to a nice pair of feet apart from your own, you can actually buy foot-themed toys online – including silicone mannequin feet.

Last year, someone took this a step further by creating a ‘foot vagina’ – which works like a fleshlight, so you can essentially have sex with the silicone toy.

If you fancy making a quick buck, you can even sell photos of your feet to others (so long as you don’t mind them using your tootsies as inspiration during wank sessions, that is).

And hey, if the thought of playing with feet puts you off completely, that’s absolutely fine.

Just pop on a pair of socks during sex and your lover will probably get the hint.

What’s the deal with Feet Week?

Feet Week is a week dedicated entirely to feet… as the name probably gives away.

We figured we could all do with something unrelated to coronavirus to occupy our minds during the pandemic – and what better topic than feet?

From 4 May to 10 May you can find articles on everything feet, from what it actually takes to be a foot model to what it’s like to be a pro toe wrestler.

You can read all our Feet Week content right here.

Do you have a story that you want to share with us?