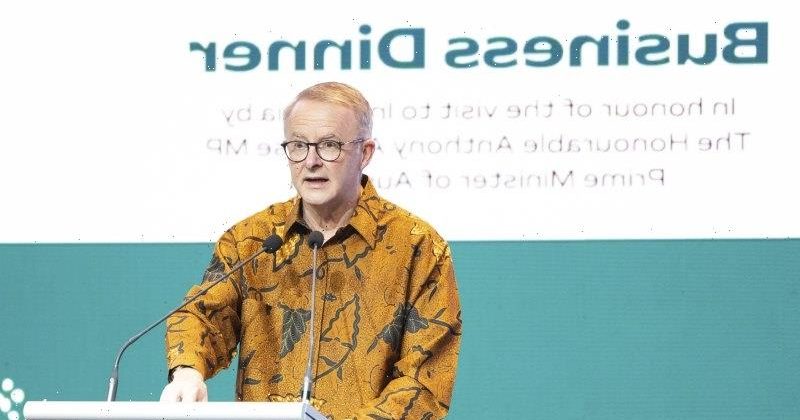 Makassar: Anthony Albanese has embraced big business on his first trip to Indonesia, bringing the chief executives of some of Australia’s largest companies to Jakarta to send a clear message about the need for closer economic and political ties.

A week after Opposition Leader Peter Dutton said big business had shifted away from the Coalition and he would target small business owners, the prime minister was explicit about his desire to improve trade and investment between Australia and Indonesia, who are currently each other’s 13th largest trade partners. 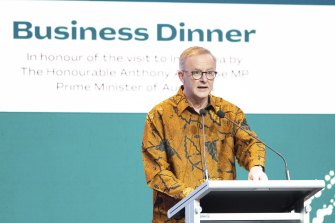 “The truth is that our economic relationship has struggled to keep pace with the reality of Indonesia’s extraordinary economic rise,” Albanese told a room full of Indonesian and Australian business leaders and a posse of ministers from both nations in central Jakarta on Monday night.

“The new Australian government that I lead is determined to turn that around. We’re putting trade and investment at the heart of our regional and international agenda. We see Indonesia as central to our trade diversification plan.”

Albanese’s signal about finally easing Australia’s visa entry rules for Indonesian students, tourists and business travellers is hugely significant – and the move was partly framed in economic terms, too, about capital heading elsewhere.

Even his decision to head to Makassar, where no Australian prime minister has travelled before, was an economic one – the government wants to grow trade with eastern Indonesia, which is less developed, and Sulawesi’s capital is home to one of the largest flour factories in the world – an Indonesian-Australian joint venture. 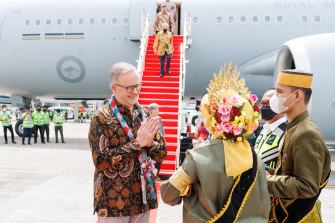 And why such an emphasis on diversification? The answer is China, though no one wants to say it out loud.

It’s not unusual for ministers to bring business delegations with them – Tony Abbott did so to China in 2014, and Simon Birmingham to Indonesia in 2019 – but this was a high-powered delegation, particularly given the trip’s short notice.

Commonwealth Bank, which has had a presence in Indonesia for more than 25 years, was represented on the trip by chief executive Matt Comyn who said the bank wanted to support “Australian businesses looking to be able to develop closer economic ties with Indonesia”.

“It’s a very large market, it’s a huge population with a good growth profile and for Australian business it’s definitely a market they should be considering,” he said.

Wesfarmers boss Rob Scott, also part of the delegation, said the company had “multiple relationships with Indonesia, on the sourcing side as we look to diversify the sourcing of products that we sell across our businesses, K-Mart and Target. Indonesia is becoming an important market”.

In other words, Wesfarmers is evaluating Indonesia as a potential alternative to China for the production and sourcing of products.

The company is also looking to Indonesia as a potential export market for a lithium mine it is developing in Western Australia, given Jakarta’s desire to develop domestic electric vehicle capacity. 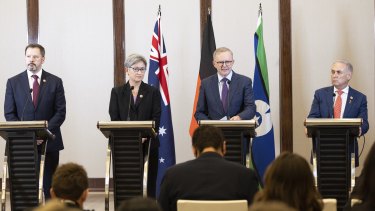 Albanese’s desire to grow business relationships has two dividends: it grows both nations’ economies, and also adds strategic weight and depth to a vital regional relationship at a time when governments across south-east Asia are grappling with how to handle Beijing’s increasingly assertive stance.

The prime minister has been in office for a little over two weeks but already he has travelled overseas twice, while Foreign Minister Penny Wong has made two additional trips to the Pacific.

Albanese’s view is that repair work is needed on a series of Australia’s bilateral relationships, not just in the Pacific. He will undertake the trip to the Pacific Islands Forum next month and the details of another overseas trip are being finalised.

The Indonesia trip’s emphasis on business and trade plays directly to one of President Joko Widodo’s strongest suits, given his background as a successful self-made businessman and his desire to develop the country’s infrastructure and lift millions more people out of poverty.

The foundations for growing trade between Australia and Indonesia are there, too, with a free trade deal coming into force nearly three years ago.

For those questioning if the political will exists, Albanese chose carefully by bringing not just Foreign Minister Penny Wong but also Trade Minister Don Farrell and Industry Minister Ed Husic.