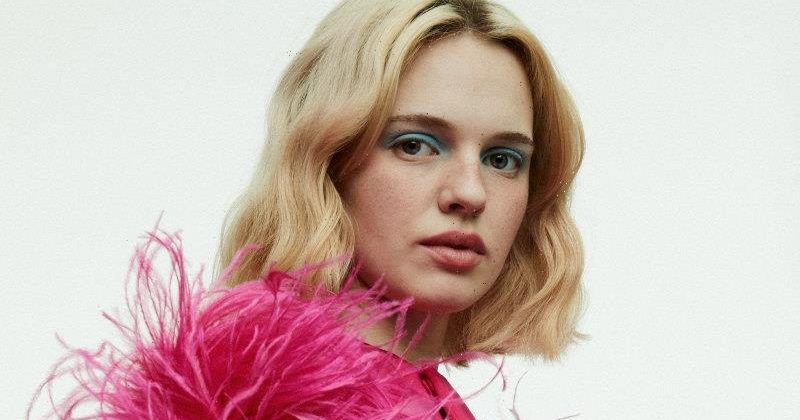 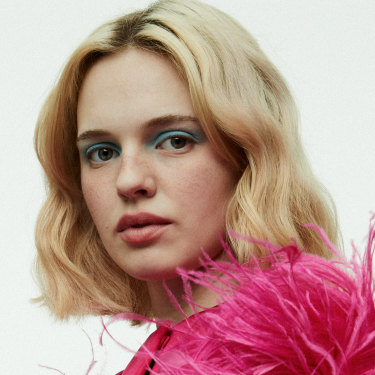 Photography by Christopher Schoonover; Styled by Chloe Hartstein; Hair by Takuya Yamaguchi; Makeup by Tyron Machhausen at the Wall Group.Credit:

In 2015, Australian actor Odessa Young starred in not one but two films, Looking for Grace and The Daughter, both of which screened at the Venice and Toronto film festivals. It’s a remarkable feat for any actor, but all the more impressive as these were Odessa’s first feature roles. Oh, and she was just a teenager. Naturally, headlines followed with words such as “one to watch” and “star on the rise” plastered next to her name.

Years on, she’s still wearing these tags. US Vogue named her as one of only six actors “set to rule 2021”. “These articles have been written about me since I was 16,” says the 24-year-old via Zoom from her apartment in New York, where she has lived for four years. “I’m excited that people are thinking that way. It’s also like, gosh, how many breakouts before people have considered me broken?”

But Odessa’s filmography would suggest that she’s already there. She moved from Sydney, where she studied at the Newtown High School of the Performing Arts, to LA just two days after her 18th birthday. After a quiet first year in Hollywood, when she was still finding her feet on her own, she scored roles in the 2018 films Assassination Nation and A Million Little Pieces.

In 2020, she starred in the post-apocalyptic television miniseries The Stand, based on Stephen King’s 1978 novel, and opposite Elisabeth Moss in Shirley, a film about author Shirley Jackson. What will it take for Odessa to feel like she’s made it?

“It is an insecure industry, so it’s kind of a protection mechanism,” she admits. “You never really feel like you’ve made it. And you know, what decides it? Is it going to the Met Gala ball? Is it a magazine article?”

If it is, then Sunday Life is calling it: Odessa Young has made it. This is only confirmed by her breathtaking performance in her latest film, Mothering Sunday, where she leads a cast that includes some of the biggest names in the industry.

The film is based on the novel of the same name by Graham Swift. Set in 1924, it centres on a housemaid, Jane Fairchild (Odessa), who finds herself alone on Mother’s Day. While her employers, Mr and Mrs Niven (Colin Firth and Olivia Colman) are out, she has the rare opportunity to spend the day with her wealthy secret lover, Paul (Josh O’Connor), who’s engaged to another woman.

If you’re thinking it sounds like a Downton Abbey-type period drama, think again. “I say this with the utmost respect possible, but it’s like an anti-British movie,” says Odessa. “It goes against British sentimentality, and how love and loss is portrayed in British cinema and television. I think Eva [Husson] being a French director obviously has a lot to do with changing the perspective of the narrative. 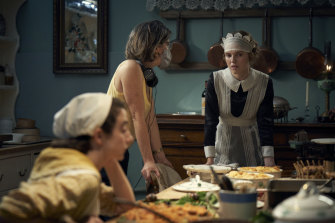 Young with director Eva Husson, on the set of Mothering Sunday.Credit:AP

“Previously in those stories, a character like Jane would have been a subplot. It would have served some purpose to show how different life is downstairs. But giving Jane the lead and her own story and letting that story play out? I think that’s actually the first act of resistance against what has typically been the ‘upstairs downstairs’ stories.”

It’s not just the plot of Mothering Sunday that deviates from other British aristocracy dramas. The portrayal of passion doesn’t shy away from the raw nature of sex, either. But the gentle pace of the film and the tenderness between the lovers makes these moments feel poignant rather than graphic.

“We get asked to do all sorts of crazy shit as actors, anyway. So in the grand scheme of things, it’s actually not so crazy to be nude.”

In one memorable scene, Odessa’s character explores her lover’s mansion completely naked, resembling a model from a Botticelli painting with her porcelain skin and flowing auburn hair. Yet Odessa moves with such natural composure that her nudity feels almost unremarkable.

“I think that Eva would be pleased to hear that because it is meant to feel lived in. It’s meant to feel relaxed,” says Odessa. But was she really as comfortable as she looks? “As comfortable as one can be,” she says. “We get asked to do all sorts of crazy shit as actors, anyway. So in the grand scheme of things, it’s actually not so crazy to be nude.”

Odessa may have been more daunted to work alongside actors whose work she’d admired for so long. But as she found out, not only are Colin Firth and Olivia Colman incredible performers, they’re also lovely people. “So that’s always nice, I don’t have to feel disappointed,” she says, laughing. 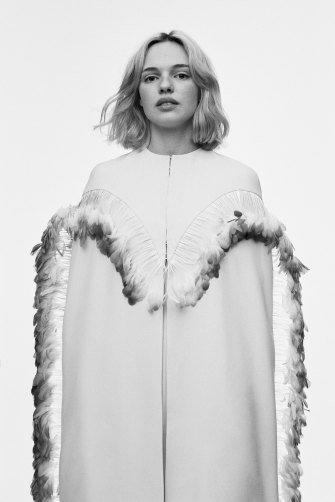 She also took the opportunity to learn from the award-winning duo. “It was just an incredible school. To see masters do what they do best, in any industry, in any job, is really amazing to watch. Because you see the passion, and you see the time that’s gone into it.

Especially with them, they’ve won Oscars for a reason. And I got to see what that reason is first-hand, and it’s just magical.”

Can she pinpoint the reason? “It’s hard to articulate, because it’s in the way they carry themselves. It’s in the way that they bury their egos, which is truly one of the most difficult things that one can do. It’s not trying to tell everybody in the room around you, just by the way you walk into it, that you’re the most important person in there.”

And an overblown sense of entitlement is something Odessa has come across. “Actors are just awful people sometimes,” she says, with refreshing candour. “Truly, I don’t have many friends who are actors and the ones I do have, we all have a very sceptical understanding of this job, because it’s really not that important.”

But she admits she’s gone too far the other way at times, a quality she recognises in fellow Australian actors. “I think Australians are really afraid to admit how much the job means to them,” she admits. “It’s something that I had to learn how to do. Basically, I had to have this moment where I was like, ‘Okay, it’s time to stop pretending that I can just put this audition down tomorrow, and I don’t care about it.’”

“I think Australians are really afraid to admit how much the job means to them.”

“Americans have this culture of individualism, everybody just wants to be on top. But we find it much harder to admit that we want things for ourselves. I remember having to have big talks with myself, like: ‘I want to take this seriously. Why is my weird Australian tall poppy syndrome not allowing me to take my job seriously?’ It meant that I was really short-changing myself in terms of how I worked. I thought that putting too much work into it was lame.”

Was she afraid of committing the crime of being a “try-hard”? “Exactly! And it’s so twisted,” she says. “I still have to remind myself that I have nothing else I want to do, so why am I pretending I have things I can fall back on? I know that the only person I’m hurting is myself.”

Maybe one day Odessa will even admit that she’s made it.