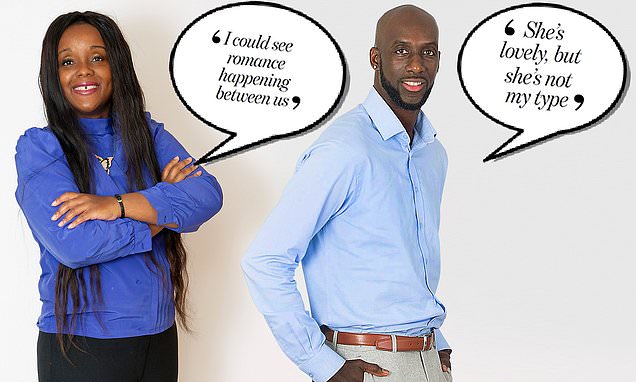 Every week, we send a couple out on a blind date. This time, Orson Nurse, 35, had lunch at Rump and Wade restaurant in Stevenage, Hertfordshire, with Adwoa Date-Bah, 39.

Orson works in retail and as a part-time model and lives in Birmingham, while Adwoa is a marketing executive living in Bedfordshire. Neither has been married. 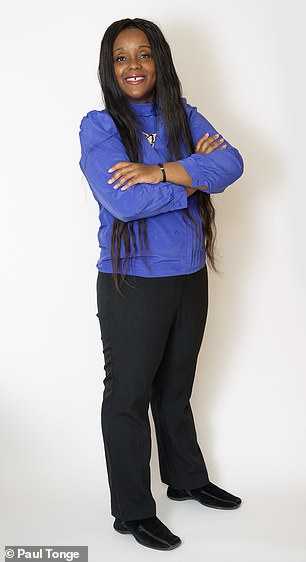 Adwoa Date-Bah, 39, (pictured) is a marketing executive from Bedfordshire

Orson is a really good looking guy — he told me he’s a part-time model, which, I have to say, I found a bit intimidating!

In fact, I was really nervous at first, so it’s lucky that he was friendly and very smiley.

We soon worked out we have quite a few things in common. We’re both very focused on our careers, but like entertaining at home, cooking and spending time with friends and family, and I thought we shared some similar values. The conversation was light-hearted and didn’t feel awkward at all.

We also talked about our backgrounds — he is from St Kitts in the Caribbean, while my parents are from Ghana, but he told me he used to have a Ghanaian girlfriend and knew how to make some of our traditional dishes, which was impressive.

I do think there was a little flirting between us. Honestly, I was attracted to him and thought there was a possibility of romance as we seemed to get on well, but he kept asking me about other dates I’d been on, so I wasn’t sure if that was his way of letting me know he was looking for only friendship.

The restaurant was quite old-fashioned, in a good way, and we both ordered the same starter of soup.

I dated a lot at university and, in my mid-20s, I had a few relationships, each lasting a year or so. But recently things have slowed down and I haven’t been on that many dates in the past four years. It’s partly because I’ve been very busy with my career and romance took a back seat for a while.

Now I’m ready to try again. I’ve gone on a few online dates and even went speed-dating. I met someone who I dated for a couple of months, but then he got back together with his previous girlfriend, so that was that. It was really disappointing.

I even joined salsa classes to broaden my social circle but, while I learnt some great moves, there was no one who I wanted to make a move on me!

All I’m looking for is a humble, loyal, smart guy who is relatively handsome and who can commit. How hard can that be?

It seems to be harder to find that connection the older I get, and I don’t know why. So it was lovely to be on a proper date.

How do you know if there is chemistry on a date?

It’s not always easy to know if you are on the same page, says Dating Doctor ALANA KIRK . . .

As we walked out together after the meal, we had a hug and Orson took my number, although we didn’t set a date for meeting again. I messaged him when I got home to make sure he got the train safely and he replied, but there hasn’t been much since, which is a shame.

Even if nothing develops with Orson, it has been really good for me to go on this date as it has given me a bit more confidence and reminded me I can be fun company.

I think it will give me the impetus to do a bit more — it just requires putting in the effort.

My friends tell me I’m funny and amusing, so I just hope there is someone out there who will appreciate me.

Orson Nurse, 35, (pictured) is a retailer worker and part-time model from Birmingham

I’d never been on a blind date before, so thought I’d give it a try — but I don’t think I will again!

Adwoa was lovely, but there just wasn’t a connection and I’ve realised it’s better that I choose who I date going forward.

It’s hard to put into words what you like, but when I meet someone I immediately know if they’re my type. I don’t think I’m picky, but I find confidence really attractive.

I’ve been single for two years and, while I’ve gone on the occasional date, I haven’t yet found my soulmate.

I’m looking for a lady who can make me laugh and who doesn’t take herself too seriously, but she has to be driven, too. That’s really important. It’d also be nice to find someone who is into music and fashion and loves life like I do.

I don’t really do online dating any more, as I’m too busy modelling for fashion magazines and working at my day job — together, they take up a lot of time. Still, I wasn’t nervous, as I’m used to meeting people with my job.

When Adwoa walked in, I thought she was a nice girl, but quickly saw that the vibe just wasn’t there between us. Adwoa is wonderful, but a much quieter personality — I could see she was quite nervous, so I tried to make sure she felt comfortable.

It wasn’t awkward at all, but we both agreed just to have starters, rather than anything further. Neither of us was very hungry.

We had a good conversation, chatting about our families and work, but in terms of common ground, there wasn’t much else. Our taste in music is at opposite ends of the spectrum: I listen to carnival music and Adwoa likes country.

That said, I tried to make sure conversation flowed. I definitely felt I led most of the talking as she came across as quite shy. After a while, she did relax — I told her just to try to feel like she was chatting to a friend.

But there wasn’t any flirting because I didn’t think we were right for each other and I would never want to lead anyone on.

I do think Adwoa probably liked me in a romantic way, as she said she’d like to stay in touch. She kept saying she was trying to read me, but I think I’m pretty straightforward. She also said I was free-spirited — a nice compliment. I tried to give her some positive messages about herself, too.

As we walked outside, we had a hug and I told her to take care. Afterwards, she messaged me, saying it was really nice to meet. I thanked her for a lovely date, but didn’t suggest another. I don’t think we’d work romantically.

Adwoa is a kind, friendly, lovely person with a lot to offer. Though we weren’t a match, she’d make the right person very happy.

REGRETS: That we weren’t right for each other.