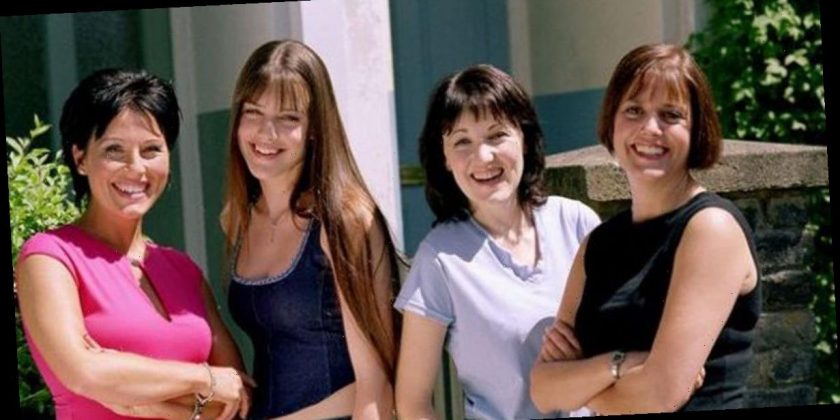 Where would the BBC’s hit soap EastEnders be without the famous Slater family?

The iconic Slator clan made their stamp on the popular TV show to replace the Italian Di Marco family.

Sisters Zoe, Kat, Little Mo and Lynne all moved into the Square with their father Cabbie Charlie, played by Derek Martin.

In 2000 Lynne’s husband Garry Hobbs, played by Ricky Groves, was also brought on the scene and became a much loved charactor on the show.

We take a look at where the legendary stars are now…

Someone we all remember from her time in the Slater family is, Kat, played by Jessie Wallace.

In 2005 the actress, 49, decided to take a five year time out from the show and her return means she thankfully is still on the show now.

The iconic star is also a mum in real life to her 16-year-old daughter Tallulah, who she shares with her policeman ex, Dave Morgan.

Jessie took a seven month break from the soap which saw her make a comeback last September.

Before his time as an actor, Ricky, who played mechanic Gary, was in fact a chef for 15 years.

After coming into the Square as Lynne’s husband, he left the Square in 2009 after sailing away with his lover, Dawn Swann.

Since leaving EastEnders, Ricky, 52, has had a number of TV gigs on shows such as, Celebrity Juice, Big Brother’s Bit on the Side and the movie, The Smoke.

EastEnders stars: Past and present

In life outside the soap, Ricky got hitched to Dragon's Den star Kay Russell in 2015 and the sweet pair enjoyed taking part in a Christmas celebrity special edition of Come Dine With Me that same year.

Prior to his marriage with Kay, the actor was with actress Hannah Waterman, who starred as Ian Beale’s wife at the time, Laura. Ricky made Hannah his first wife in 2006, but their relationship came crashing down when Hannah walked out on him three years later.

Who doesn’t remember the famous words of Zoe Slater: "You ain't my muvver!"

Actress Michelle Ryan, 36, was most likely unaware that the four word line she screamed at her onscreen mum, Kat (who she thought was her sister at the time,) would make soap history.

Walking away from the show in 2005 because Zoe had been framed for murdering Den Watts, Michelle never made a comeback like some of her other co-stars.

Talking to the Bristol Evening Post she said: "I just got quite bored in the end, to be honest. Doing the same thing day in, day out. It's just so boring. I like to jump from different things.”

The departure of Michelle meant that she could throw herself into the movie world as she landed the role of Jamie Sommers in the Hollywood film, Bionic Woman.

Now 87, he broke his collarbone which led him to his role as the happy cabbie on EastEnders.

After playing Charlie for an impressive 11 years, Derek decided to return to the show in 2013 and in 2016.

It was during these times on the Square that Charlie was sadly killed after from a heart attack. Since his EastEnders character was killed off, Derek, has appeared in the likes of Celebrity Coach Trip and Doctor Who.

Much like when Charlie helped his great niece Stacey Branning through depression, in real life Derek’s son has battled with the condition.

Speaking to Lorriane, Derek explained: "It was exactly the same thing. I was going to work. Stacey in the storyline had depression and they couldn't work out what it was.”

"Then I was going home and there was my son, who I had been worried about during the day, suffering from severe depression,” he continued. “I had it fictionally and I had it practically.”

After leaving the Square in 2006, last year, Kacey teased fans in hope of her return as she shared a photograph at the set of the soap, which is based in Elstree Studios.

But following a string of acting roles in TV shows including Doctors, Hotel Babylon and Casualty, the soap star more recently landed a spot on Grantchester as Cathy Keating.

In January 2019, Kacey revealed she took a break from her career after discovering that her 13-year-old son, Elwood was on the autistic spectrum.

Following her split with her on-screen hubby, Gary, Elaine Lordan said goodbye to her Eastenders character in 2004.

The first of the Slater family to leave the show, Elaine, 54, said goodbye to her soap star role and later landed a place on I'm a Celebrity… Get Me Out of Here! a year on.

Sadly, the actress, who’s also appeared in Soapstar Superstar, had to leave the ITV competition due to ill health.

In real life, Elaine was struck with a bunch of personal tragedies, including the heartbreaking loss of her son, James, in 2005, who was born with a diaphragmatic hernia and had only just turned one at the time of his death.

It was just nine years before this that Elaine’s mum Bernadette died at the age of 62.

Elaine transitioned from an actress into an author when she wrote the book, Whatever It Takes: A Story of Family Survival, where she opened up about her mum's suicide.

Devastatingly, in 2007 the star found out she was expecting again but lost the baby after suffering from a miscarriage.