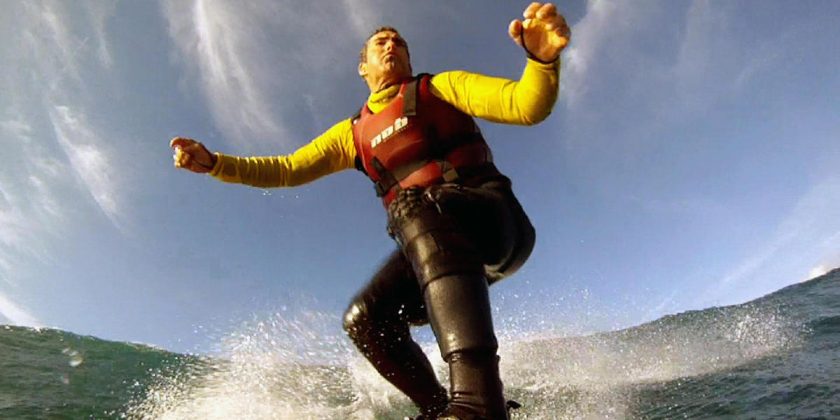 Ever since Garrett McNamara rode a 78-foot monster wave to set a then-world record there, the Portuguese town of Nazare has attracted a stream of surfing talent hoping to beat it. Who will ride one bigger? Who will get hurt trying? Anderson Cooper and 60 Minutes’ cameras go to Nazare to experience the waves first-hand on the next edition of 60 Minutes Sunday, November 4 at 7:00 p.m. ET/PT on CBS.

The waves come every winter, the result of not just currents and wind, but a deep underwater canyon that extends 100 miles off-shore into the Atlantic. That is where McNamara’s 78-footer came from. “All this energy and it funnels in like a V,” McNamara says, “so all this energy, it comes down the canyon and as soon as it hits a shallow point – kaboom!”

McNamara took Cooper out on a Jet Ski to get the feel of the waves. On this day, they were only 20 to 30 feet high, huge by most standards, but deemed tame by the one-time record holder. It was a wild enough ride for Cooper, though, as he clung to the Jet Ski and a small camera on a stick that provided a good view of the action.

The world’s most adventurous surfers began flocking to Nazare after McNamara’s historic ride in 2011. One of them is an Englishman named Andrew Cotton. He had been driving the Jet Ski that towed McNamara into his 78-foot record breaker. McNamara hoped to return the favor last November, when he towed Cotton into a monster wave, but things didn’t go as planned.

“This [wave] literally exploded like a bomb and he flew into the air like a cannonball. He was a human cannonball,” recalls McNamara.

“The shock went right through my back… it was like hitting concrete,” Cotton tells Cooper. “As wipeouts go, it wasn’t really that bad,” said Cotton, who broke his back and spent months doing rehab.

The same day Andrew Cotton got hurt, a Brazilian surfer named Rodrigo Koxa caught a wave that the World Surf League ultimately deemed to be two feet taller than Garrett McNamara’s record. A few months after that, another Brazilian surfer, Maya Gabeira set a new women’s world record, on a wave the WSL recorded to be 68 feet.

“The amazing thing about Nazare,” says Andrew Cotton, “Is that you never know what you’re going to get.”