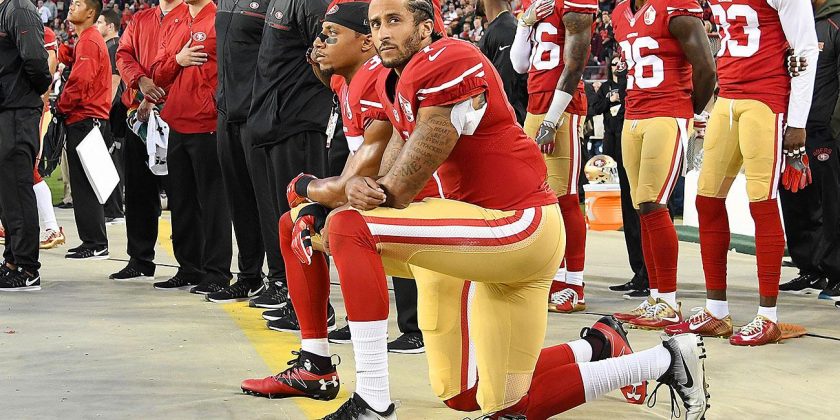 It’s been over two years since Colin Kaepernick opted to remain seated for the national anthem during an August 2016 preseason game with the San Francisco 49ers — a decision that sparked both a powerful movement and intense backlash.

Ahead of the Super Bowl, Kaepernick’s attorney Mark Geragos slammed the NFL for what he claimed is collusion to continue to keep him out of the league in the wake of the protest during a Monday appearance on Today.

Stating that Kaepernick, 31, is still in great playing shape, Geragos said of Kaepernick going another season without being signed by a team, “There isn’t anyone who has a couple of neurons firing that wouldn’t say this isn’t collusive activity.”

As the NFL season comes to an end, the movement Kaepernick left in his wake has, once again, taken center stage. Here’s what you need to know about the evolution of the athlete’s push for social change — and why some are against it.

RELATED: Colin Kaepernick Revealed as the Face of Nike’s ‘Just Do It’ Campaign in the Wake of NFL Protests

In an effort to raise awareness about systemic racism and police brutality, the then-28-year-old football star remained seated during the national anthem in August 2016 at the Levi’s Stadium in Santa Clara, California.

“I am not going to stand up to show pride in a flag for a country that oppresses black people and people of color,” Kaepernick told Steve Wyche of NFL Media about the move aftewards.

RELATED: Colin Kaepernick Doubles Down and Says He’ll Continue to Not Stand During the National Anthem

“To me, this is bigger than football and it would be selfish on my part to look the other way,” he continued. “There are bodies in the street and people getting paid leave and getting away with murder… I am not looking for approval. I have to stand up for people that are oppressed. If they take football away, my endorsements from me — I know that I stood up for what is right.”

At the time, the 49ers shared their support in a statement, according to ESPN. “The national anthem is and always will be a special part of the pregame ceremony,” the team said. “It is an opportunity to honor our country and reflect on the great liberties we are afforded as its citizens.”

“In respecting such American principles as freedom of religion and freedom of expression, we recognize the right of an individual to choose to participate, or not, in our celebration of the national anthem.”

A few days after the initial game where Kaepernick was recognized for sitting, he told the media: “To me, this is something that has to change. When there’s significant change and I feel like that flag represents what it’s supposed to represent and this country is representing people the way that it’s supposed to, I’ll stand.”

By the beginning of September, Kaepernick was kneeling instead of sitting during the national anthem — he wanted to clarify that his protest was not about disrespecting the U.S. military.

Slowly, more athletes began to join Kaepernick, starting first with some of his 49ers teammates.

Dubbed the #TakeAKnee movement, the silent act of protest quickly spread to include members of the Seattle Seahawks, the Denver Broncos and other NFL players, plus female soccer star Megan Rapinoe, high school athletes and more. Some people also chose to stand and link arms instead of kneeling.

As support swelled, so did backlash against Kaepernick. In March 2017, he opted out of his contract with the 49ers. The quarterback hasn’t been hired by another team since — despite, as Sport’s Illustrated has noted, the fact that he threw 16 touchdowns and only 4 interceptions in 2017.

In an ongoing lawsuit, Kaepernick is suing the NFL for colluding to keep him unsigned because of his politics. An arbitrator recently threw out the NFL’s request to dismiss the case.

RELATED: Colin Kaepernick Kneels During Chargers Game in Continued National Anthem Protest as He Is Joined by More Players

As more players followed Kaepernick’s lead, President Donald Trump weighed in on the protests in September 2017 with a series of tweets, stating — among other things — that NFL owners should fire players who do not stand for the anthem, as it is disrespectful to the American flag and military.

During a rally speech in Alabama that same month, Trump told the crowd, “Wouldn’t you love to see one of these NFL owners, when somebody disrespects our flag, say, ‘Get that son of a bitch off the field right now. Out, you’re fired.’ “

“I say this as a person who receives credit for using my platform to protest systemic oppression, racialized injustice and the dire consequences of anti-blackness in America,” Kaepernick said at SI‘s Sportsperson of the Year ceremony at the Barclays Center in Brooklyn. “I accept this award not for myself, but on behalf of the people. Because if it were not for my love of the people, I would not have protested. And if it was not for the support from the people, I would not be on this stage today.”

He continued, “With or without the NFL’s platform, I will continue to work for the people because my platform is the people.”

RELATED: NFL to Fine Teams Whose Players Don’t Stand During National Anthem and ‘Show Respect for the Flag’

In May 2018, NFL owners approved rules that force players to stand on the sideline or remain in the locker room during the anthem and fine those who do not comply. But according to the Washington Post, the policy is on hold because of disagreements between the league and the NFL Players Association.

And in September of last year, the athlete was revealed as a new face of Nike’s “Just Do It” campaign: a black and white closeup of Kaepernick’s face with the superimposed words, “Believe in something, even if it means sacrificing everything.” Two days later, a full commercial with Kaepernick was released.

Many — including fellow athletes like tennis champion Serena Williams and NBA star LeBron James, who are both part of the campaign — praised Nike, while others responded with fury, threatening to boycott the sportswear titan.