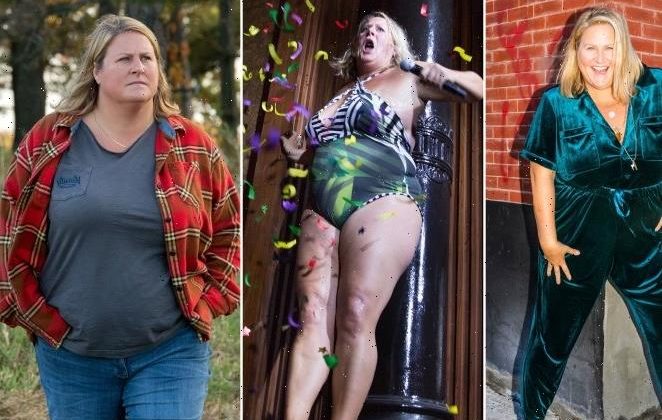 There is a breath-sucking scene in the new HBO show Somebody, Somewhere – based on some of the more piercing experiences of comedian Bridget Everett – in which Sam looks over a new friend’s “dream board”.

Sam, played by Everett, is not in a good place. She is struggling to find her footing after moving back to the small Kansas town where she grew up to take care of her dying sister who was her fiercest ally. A one-time high school singing star now marking standardised tests in a room lit by fluorescent lights, she is lost and achingly lonely. 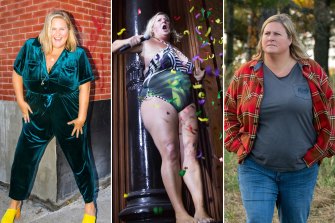 “I was tearing my hair out, in the way that I didn’t feel like there was a place for me and that I’d missed the boat,” says comedian Bridget Everett of life before she found her niche, with raunchy cabaret (centre) and her new show (right) in which she struggles to find her place in her small home town.Credit:New York Times / Supplied

“Dream all you want, Joel,” she says, looking at her friend’s board, covered with pictures representing all that he wants from life: images of the Eiffel Tower, multiple hands forming the shape of a heart, a sunset framed by palm trees. “But this” – she gestures at Joel’s drab living room, with a beat up piano and plaid curtains – “is the future. We’re in our 40s, and it hasn’t happened yet, has it?… And that’s because it’s not going to happen.”

It is a vitriol that Everett – now a headlining comedian, finally, at 49, and beloved by the likes of Amy Schumer and Broadway legend Patti LuPone – says is ripped straight from her own life.

“Oh yeah, I think in my late 20s and 30s I was lost, and I was a complicated friend to have,” says Everett, speaking over the phone from her apartment on the Upper West Side of New York from which she sometimes spots her neighbour, documentary filmmaker Michael Moore, pacing on his terrace across the street. At the time, she was struggling to find an outlet for her talents: an operatically-trained voice and an unapologetic love of sex excess, and whipping others into a frenzy of uninhibited joy. After moving to New York from Kansas in 1997, she did a lot of drunk karaoke and joined a bus-and-truck children’s theatre tour of Hansel and Gretel. She ended up waitressing for 25 years. 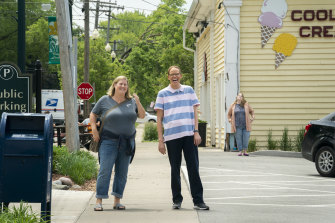 “A lot of times [growing up] I felt like I was friends with everyone, but friends with no one, in a way,” says comedian Bridget Everett, pictured here with actor Jeff Hiller, on the set of her new show, Somebody, Somewhere.Credit:HBO/Fox Showcase

“A lot of my friends were doing great, you know, Broadway, TV, movies. And they weren’t trying to make me feel any less-than, but I would lash out in one way or another, either about their optimism, or their belief in love.” She lets out a laugh. “Whatever the case may be, I was not having it.”

This is not a side of Everett that her fans – used to her raunchy sold-out comedy shows – will have seen.

In her long-running hit cabaret show in New York, the comedian wears nipple-baring dresses and jokes about abortions, her parents’ genitals and sloppy sex while doing crowd work that, as one paper put it, “violates most decency clauses”. (Her set usually ends when she picks a man out of the crowd and sits on his face.)

This has garnered her all kinds of recognition. She recently performed at a benefit held by Jerry Seinfeld, at his home in the Hamptons, and sang at Amy Schumer’s wedding. But, says Everett, “I felt like I wanted to do something that’s closer to the heart”.

And one of the through-lines of her life, says the comedian, is how “very lonely” she was during her decades-long search to find her “people” and her professional niche, not to mention how feeling you don’t belong is still close to the surface for her, even though she’s since found professional recognition and, more importantly, the necessary coping skills to manage the ache.

“You know, I grew up in Kansas, and I had a lot of friends, I was popular, and I went to school in Arizona, but I never really felt like I clicked in with my group of people,” says Everett, who grew up in the tiny town of Manhattan, Kansas where the show is set.

Her friends – unlike her – had their heart set on getting married, and having nine-to-five jobs.

And like Sam, Everett also had a sister who was the one family member who understood her best. “My family might have been wondering what I was doing in New York, was I just waiting tables, was I actually singing [but] Brinton always believed in me from when I was little,” says Everett of her sister who died of cancer in 2008. “She just always looked after me.“

Professionally, Everett spent a long time tearing her hair out, proverbially, “in the way that I didn’t feel like there was a place for me, and that I missed the boat”. In her late 30s by the time she starred in a hit cabaret show – developed by Sex and The City executive producer Michael Patrick King – she struggled to take it off-Broadway, because she was deemed too raucous.

Why then has Everett’s latest project – which sees her character Sam rediscover her voice and place with the town’s misfits who hold a regular open mic night – soared to wild and mainstream acclaim? Especially when, as she has put it, “It’s not every network that’s calling up a perimenopausal woman who sings cabaret to do a TV show”?

“I feel like a lot of people, after these past two years, are feeling at sea or disconnected from people and they have a lot in common with how Sam is feeling,” says Everett of Somebody, Somewhere, which has been lauded as “2022’s first great show”. (Everett’s performance has also been hailed as “restrained and real, as rich and layered as a well-tended soil bed”.)

Though Everett has long since found her people – with the likes of Schumer, Murray Hill, the renowned drag king who stars alongside her in Somebody, Somewhere and other creative people who “paint outside the lines” – she still often feels at sea.

“Doesn’t matter where I go, and how excited they are to have me, I just always feel like I don’t belong; it’s just in my DNA,” she says, noting she felt like this just the other day while visiting the Late Night With Seth Myers show to spruik her new show. (The third episode dropped, locally, on Foxtel yesterday.) “Even though I’ve got an HBO show, and things are going great, I still struggle with those feelings of loneliness, you know, and I think Sam and Bridget are some very similar people.”

When she was younger, she says, she relied on your lesser crutches to deal with the feelings. “I made up for it by just trying to make people laugh, and you know, probably drinking too much sometimes,” she says, noting that she grew up in a family that did not talk about their feelings.

Now, though, she has learned to lean in to the love she has in her life, both in the emotional embrace of her compassionate “true friends”, and with – for the last seven years – her beloved Pomeranian, Poppy Louise.

“Not to be too simplistic, but I’ve never had a dog before, and she was so special,” says Everett of her dog, who died in June. “I just feel like, honestly, I would’ve never been able to do this show without her. I wouldn’t be doing so well in my career without her. I feel like she just unlocked the final door, the final thing that just allowed me to really love. And without really loving, you’re limiting, at least in the arts, your abilities. Because singing and music, it’s all, at the end of the day, about love.”

So, these days, she may be vomiting periodically from anxiety over whether Somebody, Somewhere will be picked up for a second season, but she’s also checking the website Petfinder.com three times a day.

“I’m just hoping that six months from now, I’ll be filming season two with my new, probably very fluffy Pomeranian with a tragic backstory and a heart of gold.”