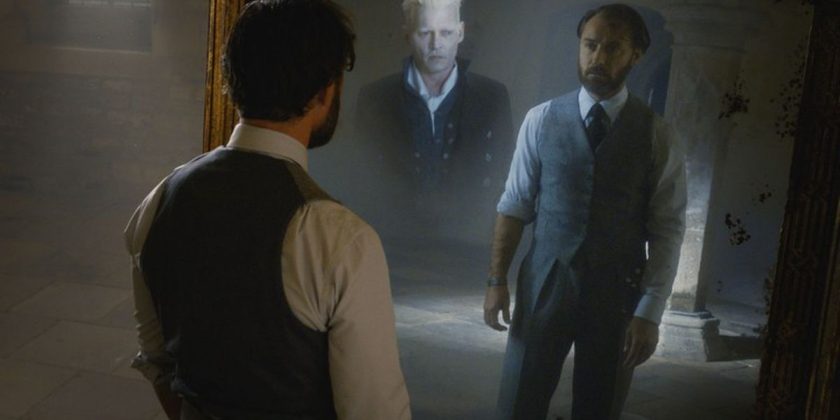 Whatever you’re feelings on Fantastic Beasts as a franchise, there’s no denying it’s helping Harry Potter fans fill in some blanks.

JK Rowling created a whole big wide wizarding world with the first set of books and now Fantastic Beasts is opening it up even further, fleshing out the characters we know and love.

One such character is Dumbledore.

In Harry Potter we know him as the headmaster of Hogwarts, and one of the greatest wizards ever.

His family history, however, we know less about, but now that’s all changing.

In Fantastic Beasts: The Crimes of Grindelwald we learn about Dumbledore’s siblings.

At the end of the movie, we find out Credence is actually Albus’ relation and he’s called Aurelius.

We’ve never heard of this Dumbledore before, they’re new to the universe.

Another name we hear in the movie, though, rings more of a bell: Ariana Dumbledore.

Dumbledore brings her up when he chats to Leta, saying he understands her pain over her brother.

But what happened to Ariana?

Who is Ariana Dumbledore?

"You know the secret of my sister’s ill-health, what those Muggles did, what she became," says Dumbledore in the books, but what does he mean?

Ariana may only get a mention in the latest movie, but she’s actually pretty key to understanding Dumbledore and Grindelwald.

In Harry Potter and the Deathly Hallows we learn the entire backstory mainly from Aberforth, the barman at the Hog’s Head Pub…who we learn is Albus’ brother.

In the book, he reveals that Ariana was attacked by three muggle boys when she was young.

At just six years old she was "set upon" by the boys. "They’d seen her doing magic, spying through the back garden hedge; she was a kid, she couldn’t control it, no witch or wizard can at that age. What they say scared them, I expect," he says.

"They forced their way through the hedge, and when she couldn’t show them the trick, they got a bit carried away trying to stop the little freak doing it."

Aberforth says Ariana was scarred by the whole ordeal and wouldn’t use her magic after that.

Aberforth described her as mostly ‘sweet, and scared, and harmless’ but the magic didn’t go away, so it turned inward and it drove her mad. The magic exploded out when she was angry or upset, similarly to Credence.

This wasn’t the worst of her torment. Her father, Percival, then attacked the boys for what they’d done and ended up locked up in Azkaban.

Percival never revealed why he attacked the boys as he feared if the Ministry knew that Ariana had been sent mad she would be sent to St Mungo’s Hospital for Magical Maladies and Injuries.

Dumbledore and Aberforth were sent off to school and their mother Kendra was left to look after Ariana.

The family then moved from Mould-on-The-Wold to Godric’s Hollow.

Ariana was no longer allowed out of the house unless it was at night as Kendra tried to keep her a secret. Albus and Aberforth lied to their classmates and said she was too weak to attend the school

In Rita Skeeter’s biography, The Life and Lies of Albus Dumbledore, she claims it was Kendra’s shame at having produced a Squib which made her keep her out of the public eye.

Ariana wasn’t a squib though, she sounds more like an Obscurial – the same as Credence.

At 14-years-old, Ariana flew into a rage and her magical outburst killed Kendra.

"Then, when she was fourteen … see, I wasn’t there," said Aberforth. "If I’d been there, I could have calmed her down. She had one of her rages, and my mother wasn’t as young as she was, and … it was an accident. Ariana couldn’t control it. But my mother was killed."

Albus, who had just graduated and was planning on travelling, was now forced to return home and look after Ariana, insisting his brother Aberforth remained at the school.

In Deathly Hallows it reads:

"I was gifted, I was brilliant. I wanted to escape. I wanted to shine. I wanted glory.
"Do not misunderstand me," he said, and pain crossed the face so that he looked ancient again. "I loved them. I loved my parents, I loved my brother and my sister, but I was selfish, Harry, more selfish than you, who are a remarkably selfless person, could possibly imagine.
"So that, when my mother died, and I was left the responsibility of a damaged sister and a wayward brother, I returned to my village in anger and bitterness. Trapped and wasted, I thought! And then, of course, he came …"

By he, Dumbledore means Grindelwald, who also turned up at Godric’s Hollow to stay with his aunt Bathilda Bagshot.

Soon Dumbledore and Grindelwald became inseparable planning ‘a new wizarding order’ and looking into the Hallows. Aberforth felt this left Ariana alone and neglected by her brother.

Aberforth confronted the pair and a fight ensued, leading to a duel. Grindelwald used the Cruciatus Cruse on Aberforth.

Ariana panicked and her magic burst out again – though Aberforth says he thinks she was trying to help.

What ended up happening was anything but, and she lost control of her magic.

Aberforth said: "…I pulled out my wand, and he pulled out his, and I had the Cruciatus Curse used on me by my brother’s best friend – and Albus was trying to stop him, and then all three of us were duelling, and the flashing lights and the bangs set her off, she couldn’t stand it –"

It sounds as if Grindelwald hit her with a curse, though it’s unclear.

"Grindelwald lost control. That which I had always sensed in him, thought I pretended not to, now sprang into a terrible being. And Ariana…after all my mother’s care and caution…lay dead upon the floor."

Ariana had been killed in the fight, leaving Albus stricken.

At Ariana’s coffin-side her brother’s fought which led to Albus’ nose being broken. The pair later made up, but the grief still lingers.

So when Albus brings her up with Leta, he’s speaking from a place of pain. He clearly feels as if he let his sister down. He talks of doing more and of regret.

The battle and her death loom over him and it follows this is what drove Grindelwald and Albus apart.

It’s also the reason Albus and Aberforth’s relationship is strained later in the books. Aberforth pays tribute to his sister with a picture of her in the Hog’s Head Pub.

Ariana’s death has far reaching affect – we also know Albus realised his obsession with the Hallows had impaired his judgement, prompting him to turn down the Minister of Magic job.

It also is most likely it spurred him on to then go after Grindelwald finally years later.

We also learn in the books that it was Ariana that tempted Albus to put on the cursed ring which contains the Resurrection Stone, which was one of Voldemort’s Horcruxes.

"I put it on, and for a second I imagined that I was about to see Ariana, and my mother, and my father, and to tell them how very, very sorry I was…"

So will Ariana play a larger role in Credence’s story? Will it come up in Fantastic Beasts 3? We’ll have to wait and see.

Fantastic Beasts 2 is in cinemas now.