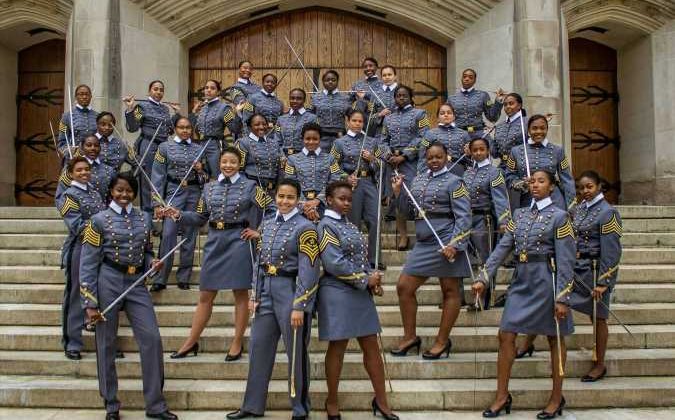 The U.S. Military Academy saw its most diverse class ever get their diplomas in 2019, with 34 black women graduating together, and 223 women in total.

The number is the largest since the first female cadets graduated in 1980, according to the Associated Press.

The AP reports that of the class of about 1,000, with 88 Latinos and 110 African-Americans – double the number that graduated just six years ago.

The history-making women posed together for a photo ahead of their ceremony in their uniforms with ceremonial sabers that has since gone viral.

“I just showed myself and those who thought I could do it initially that yes, I can,” senior cadet Stephanie Riley told the AP. “And not just, ‘yes, I can.’ I can show other little girls that, yes, you can come to West Point. Yes, you can do something that maybe the rest of your peers aren’t actually doing. And yes, you can be different from the rest of the group.”

She added that the milestone was extremely important to her considering she previously felt that she had to prove herself more than her West Point classmates.

“Even a classmate told me, I think our freshman year, that I only got in because I was a black female,” Riley recalled.

“Personally, I think [the photo] represents where the academy has come from and where they’re going,” she said. “I think that’s a testament to West Point as a whole and also the African-American women who have put themselves in a situation to succeed at West Point. I think that’s a good sign.”

According to the AP, the military academy was told to diversify by then-Army Chief of Staff Gen. Raymond Odierno in 2013.

The school’s Office of Diversity, Inclusion and Equal Opportunity was established in May 2014.

“I couldn’t be more proud to stand before the graduating class of 2019 that includes the highest number of African-American women cadets in the history of the United States Military Academy,” he said.