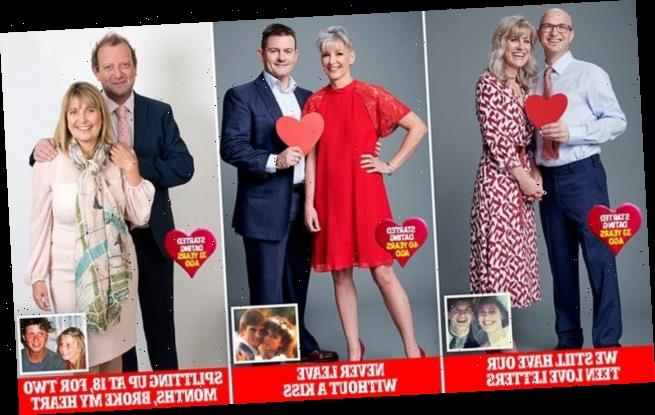 We’re proof first love can last: These couples met as youngsters and then survived fiery rows, surprise pregnancies and VERY sceptical families to stay together… so what’s their secret?

We still have our teen love letters

Caroline says: Tucked away in our loft are reams of love letters Steve and I wrote to each other after meeting in April 1987, aged 14 and 15, on a church group holiday camp in Minehead.

I noticed his good looks, and he played bass in a band, which was pretty cool.

As we left to return to our respective homes 30 miles apart, we swapped addresses and shared an awkward hug.

We began writing to each other immediately. I’d seal my envelopes with a lipstick kiss or a squirt of perfume, and would re-read his letters to me hundreds of times.

We started dating properly that July, spending as many weekends together as possible. However, as we are both from church-going families, we didn’t have sex till we married in 1993, aged 20 and 21.

We look like children in our wedding photographs. While people were outwardly supportive, I’m sure many must have worried.

Even now, 33 years after our first meeting, we try to keep the romance alive. Steve always writes a poem in my birthday card and we leave little notes for one another. 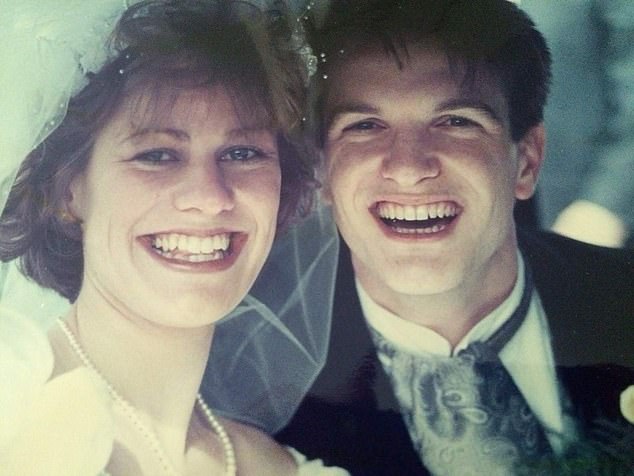 The couple first started dating 33 years ago (pictured on their wedding day) They now have three children: Noah, 23, Daisy, 21, and Jude, 18

Steve says: In our early years, Caroline and I would go on dates and observe middle-aged couples with nothing to say to each other.

We vowed never to be like that, but the reality is married life is often hard. Finances have always been tight, and Caroline had postnatal depression with our first two children, barely leaving the house for a year after the second was born.

We had moved to Manchester with my work. Miles from family and friends, Caroline felt isolated. And obviously we both had a lot of growing up to do, being so young when we married.

But we learned you have to stick together and smile. Thankfully communication is one our strengths and Caroline is ruthless about never going to sleep on a row.

There has never been any question that our first love would last.

Never part without a kiss…

Neil Sinclair, 55, owns a business coaching company and lives in Olney, Bucks, with wife Sally, 54, who works in a garden centre. They have two daughters and a granddaughter.

Neil says: Sally and I went to the same school but didn’t meet properly till a mutual friend’s party when we were 15. She was beautiful, with long, dark hair and wonderful blue eyes.

That night, I told my brother I’d met the girl I was going to marry. She has been my soulmate ever since.

Her parents weren’t keen on me initially because I had a motorbike. And when I got her pregnant at 18, all hell broke loose. 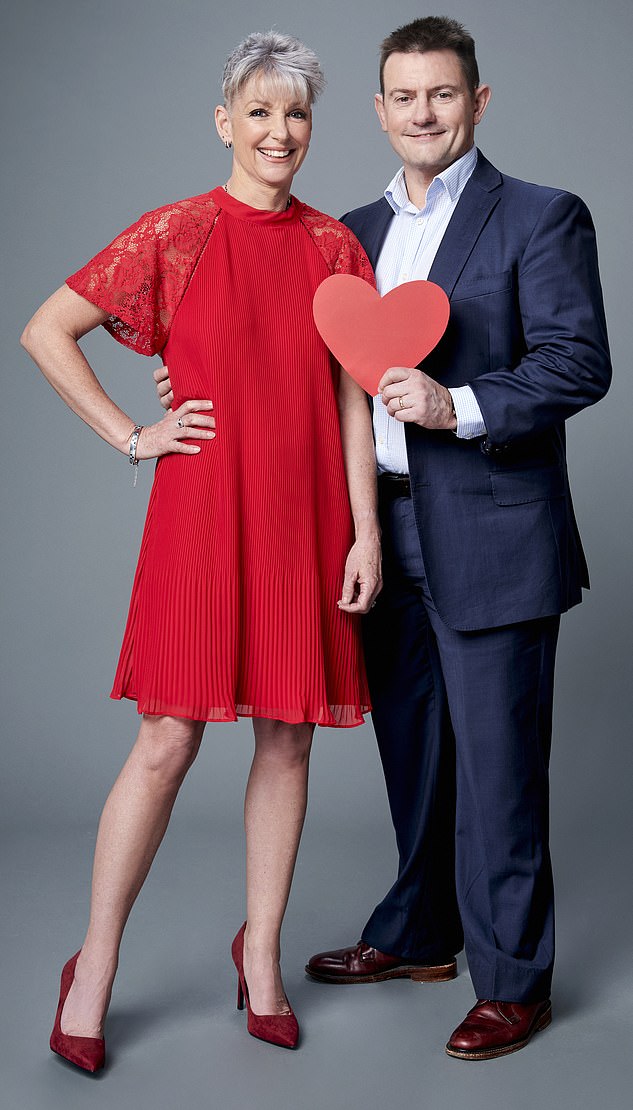 Neil Sinclair, 55, owns a business coaching company and lives in Olney, Bucks, with wife Sally, 54, who works in a garden centre (pictured together)

But around the same time I joined the military and Sally’s dad warmed to me — he was a military policeman. After our daughter was born, they were very supportive.

Yet even as new parents, they wouldn’t let us live together. Sally and our daughter, Sarah, lived with them for more than two years, until I took charge and proposed.

We got married in 1986 when we were both 20, and our second daughter was born six years later.

We’ve endured arguments, crushing bereavements and time apart when I was posted overseas, but we’re still so happy.

People always ask what the secret of our lasting first love is, and I certainly have some tips.

They include never taking each other for granted, listening to your spouse, accepting that life isn’t always fair, and being conscious to grow together.

You have to work hard to support one another through the challenges — and be sure to celebrate triumphs, too. 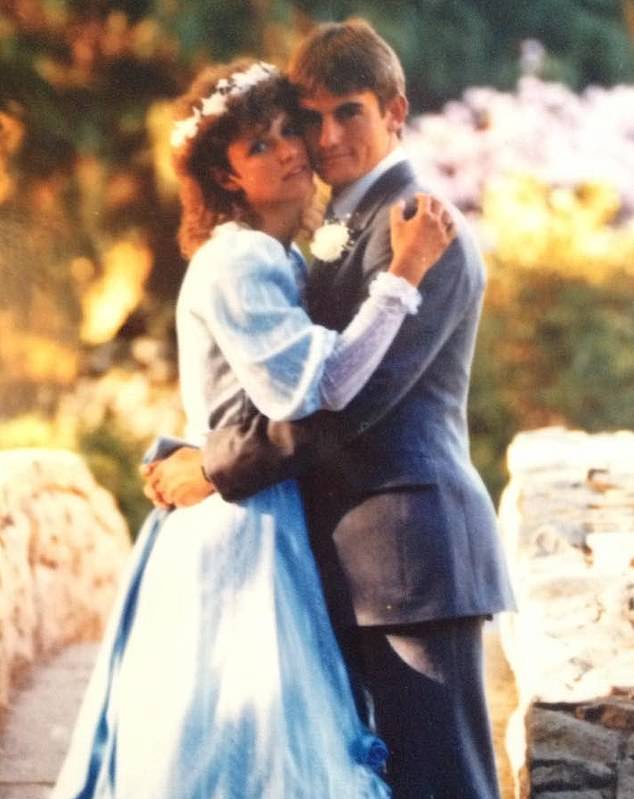 The couple started dating 40 years ago (pictured on their wedding day). They now have two daughters and a granddaughter

Sally says: No one voiced doubts about us marrying, but various family members have since confessed they never expected our love to last.

Looking back, though, I should have rebelled when my parents wouldn’t let us live together, but I had too much respect for them.

After Neil proposed on my 20th birthday with a diamond solitaire ring, I went home to show off my ‘birthday gift’.

Their reaction really shows the era we lived in: my father was cross Neil hadn’t asked his permission, and my mother wouldn’t allow me to get married in white, so I wore blue.

Thirty-four years on, we’ve proved people wrong, although there have certainly been arguments.

But we’ve learned to be tolerant, to listen to one another, to agree to disagree sometimes and to be quick to apologise. Plus, we still hold hands and never part without exchanging a kiss.

Splitting up at 18, for two months, broke my heart

Daisy says: We’re a family of first-love couples. My parents have been married for 64 years, Jonathan’s parents recently celebrated their golden wedding anniversary, and he and I started dating aged 17 while studying at the same sixth-form college in Oxford.

I couldn’t eat or sleep for thinking about him. He told me very quickly that I was the one.

When we were 18, I panicked — it all seemed so much, so young — and I split up with him for two months.

Daisy Steel, 48, a radio newsreader, lives near Frome, Somerset, with husband Jonathan, also 48, an IT programmer (pictured together)

But after dating other boys, I realised it was Jonathan I wanted after all.

When I fell pregnant aged 20, friends and family told us it wouldn’t last and we’d be insane to have a baby.

But our parents had a meeting and were very supportive, encouraging us to continue with our plans to study at university, despite the birth of Jack in 1991.

At my brother’s wedding in July 1995, I pushed everyone out of the way to catch the bride’s bouquet and, taking the hint, Jonathan proposed that same day. We got married a year later, by which time we had two children.

Having parents with strong marriages has helped. When things got rocky, we’ve worked them out, because that’s what we’ve seen them do.

There were three particularly tough years when the children and I moved to Somerset for a better life, while Jonathan remained in London during the week.

On the verge of growing apart, marriage counselling saved us and Jonathan relocated permanently to Somerset. Now the children are older, we get to be a couple again sometimes — last November we holidayed in Sri Lanka on our own.

Our lives have been inextricably entwined for more than 30 years, there’s still sexual attraction between us, and Jonathan has the most brilliant sense of humour. So if we have a row, we can eventually laugh it off. 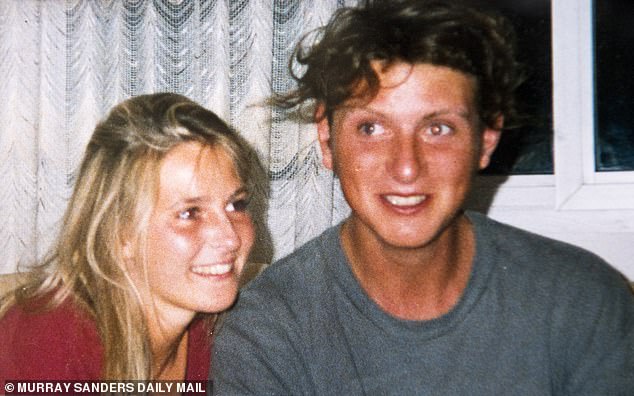 Jonathan says: My feelings for Daisy were life-changing, even at 17. I’d never felt so strongly about anyone before. Our relationship was intense and passionate.

When she left me for two months, I was devastated.

It took a while to take her back, because she really did break my heart. Friends gave me a hard time about our relationship because we were so young — especially when Daisy fell pregnant with Jack.

But while many of them have since headed to the divorce courts when things have got tough in their own marriages, we’ve stuck things out.

That’s partly because our own parents have been great role models, but also because we’ve been together for so long that we know each other inside out.

We wed 6 months after first date

Judy Jones, 59, a retired retail manager, lives in North Wales with husband Alan, 62, a retired police superintendent. They have one daughter, Clare, 37, and two grandchildren aged eight and six.

Judy says: I was just 19 when I had my first date with Alan, in September 1979. I remember dashing home and telling my mum: ‘This is the one!’ She just rolled her eyes. I’d never had a proper boyfriend before, after all.

But now, 40 years on, we’re about to celebrate our ruby wedding anniversary.

There have been bumps in the road. Our secret is to learn to laugh about arguments — and give each other plenty of space. 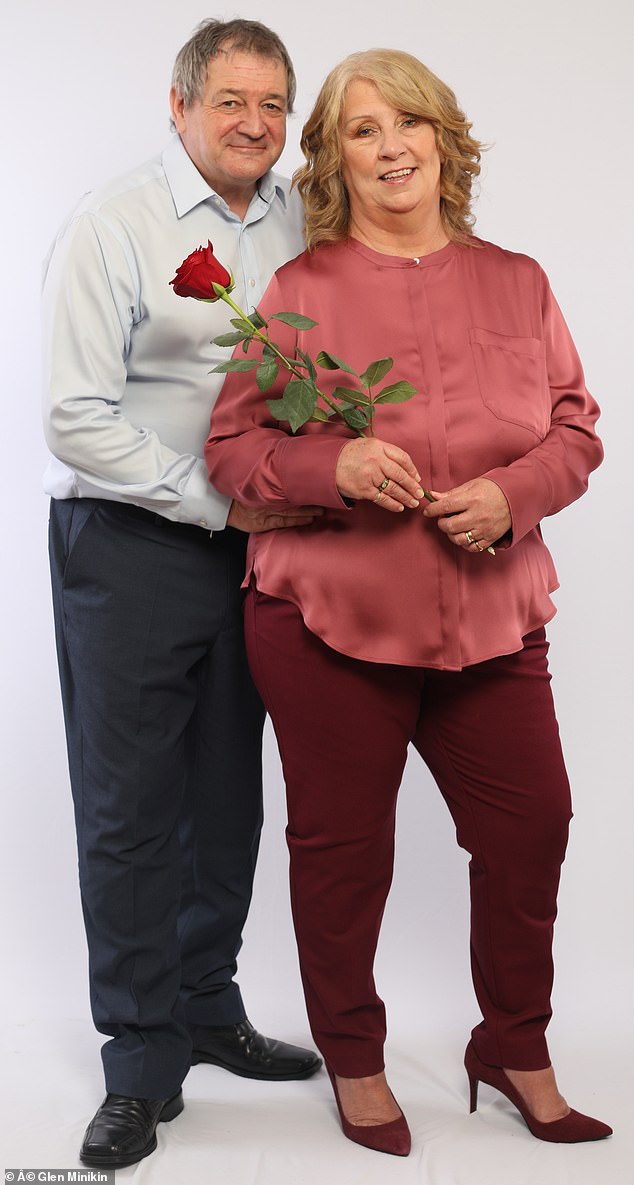 For example, Alan’s retirement in 2006 was a huge adjustment. After 30 years of me running the home, he suddenly started telling me how to load the dishwasher! It’s vital to have time apart, even if it’s just nipping to the supermarket.

Alan was a handsome 21-year-old policeman when he was introduced to me by a mutual friend.

He asked me out to dinner, where he showed himself to be incredibly attentive. He also really made me laugh. Whirlwind doesn’t come close.

After three weeks he proposed, later buying me a second-hand diamond solitaire ring for £30. I haven’t taken it off since. My parents forbade us to live together until we were married. So in March 1980, six months after our first date, we tied the knot.

As newlyweds we were fortunate enough to be given a police house and in April 1982 we had our daughter, Clare. 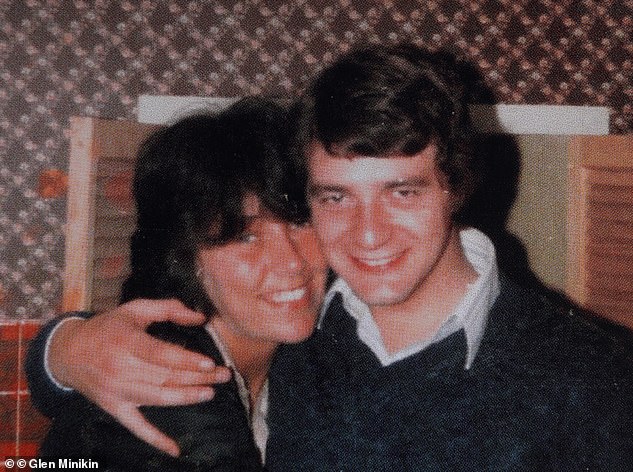 The couple started dating 40 years ago. They have one daughter, Clare, 37, and two grandchildren aged eight and six

Alan’s job as a murder investigator often took him away from home, and since retiring he’s suffered delayed trauma from some of the cases he worked on. But we’ve always stuck together.

I only have to look at my second-hand engagement ring to remember those heady early days.

Alan says: When I met Judy, I’d just been posted to the area and wasn’t looking to settle down. My police career was my first love.

But I loved her company and conversation, and before I knew it, was arranging to meet her during her lunch breaks and after work.

Judy has never just been my wife: she’s my best friend. Although 40 years is equivalent to three-and-a-half life sentences, I’d willingly do it all over again.