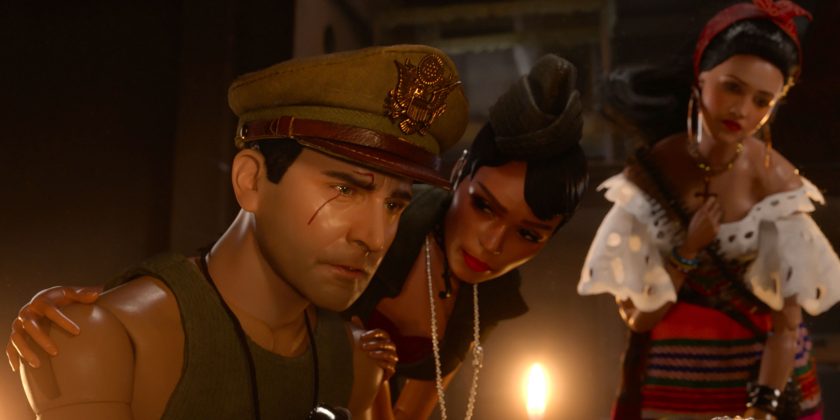 Back in 2010, the under-the-radar documentary Marwencol told the story of Mark Hogancamp, a man who suffered severe brain damage following a near-fatal beating outside of a bar in upstate New York. To deal with his trauma, Mark constructed an elaborate, miniature WWII-era Belgian village populated by Barbie-size action figures that he would then painstakingly photograph. This make-believe diorama universe became his coping mechanism — a sort of handmade therapy that blurred the lines between fantasy and reality. Mark’s story was so hopeful and inspirational that it was only a matter of time before someone would come along, buy the rights, and give it the inevitable Hollywood treatment.

Well, that time has finally arrived with Welcome to Marwen. And, not surprisingly, most of the heartwarming power of Mark’s stranger-than-fiction story is AWOL in its Tinseltown makeover. Steve Carell plays Mark with an uneasy mix of cloying simpleton smiles and just-under-the-surface shell-shock terror that lands firmly on the side of schmaltz. And Leslie Mann, as his sympathetic neighbor and latest romantic obsession, does what she can with a wholly unbelievable part.

Director Robert Zemeckis, who’s spent the second act of his career balancing on a tightrope between sentimentality (Forrest Gump) and uncanny technical artifice (The Polar Express), handles Mark’s daily interactions with the outside world less successfully than his dazzling, CGI Walter Mitty reveries, where his heroic plastic alter ego charms a menagerie of buxom plastic damsels. It’s all a bit pervy. If Marwencol made your heart go out to Mark, Welcome to Marwen does something quite different. It makes you want to back away from him slowly. C