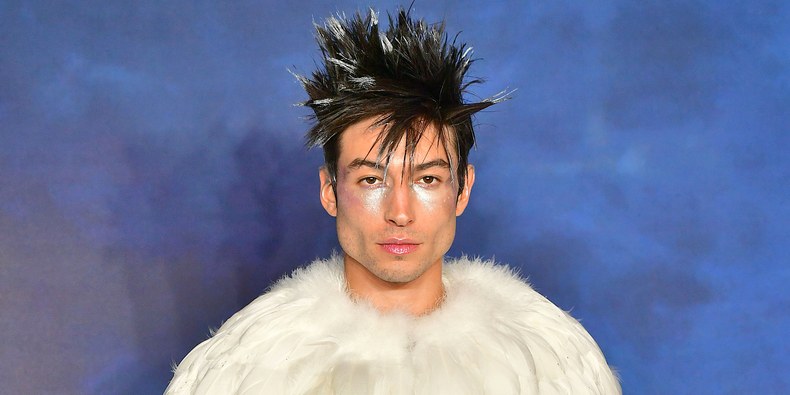 In the midst of consternation about the state of the in-depth celebrity magazine profile, Ezra Miller consented to not one but three telling interviews released in the lead up to the release of Fantastic Beasts: The Crimes of Grindelwald, all conducted in person by actual journalists and not, say, via text message with another celebrity pal. All three were accompanied by polished, fashion-forward photo shoots as well: first a gender-bending, romantic spread for GQ Style (the Eckhaus Latta skirt he wore likely had half of Bushwick shaking), then an outerwear-focused shoot for The Hollywood Reporter, and, in the grand finale, we got the *Playboy* feature in which Miller poses in bunny ears and lingerie and perhaps proves he owes some stylistic debts to the likes of Mykki Blanco and Perfume Genius. Miller kept the sartorial boundary-pushing going by wearing many an eye-catching garment on the red carpet throughout the Harry Potter spinoff's press tour, most notably by wearing a conceptual puffer gown by Moncler at the film's Paris premiere.

The end result is that, collectively at least, we have all thought about Ezra Miller more in the past 10 days than we ever had before, and learned a lot about the 26-year-old actor along the way. Indeed, this might have been a rare week where you could see in real time an actor's public image cement itself in a way that will follow him around for the rest of his career. And naturally, there's already been some backlash, too. Here, everything we learned.

He lives on a Vermont Farm and loves goats (especially pregnant goats).

Like Zayn Malik, Miller is just the latest young celebrity who has left city life behind for a return to the land. "I live on a farm in Vermont," is the very first quote in his GQ Style profile, and indeed he does live on an actual functioning farm in Vermont. It's about 100 acres by the magazine's estimation (The Hollywood Reporter posits a more conservative guess of 95 acres), and he shares it not only with fellow members of his band the Sons of Illustrious Fathers, but also a small number of goats, most of which are or were recently pregnant. "They're all pregnant," he says. "Every goat you're near right now." We are left to assume that it is his own goats, and not professional goat models, who pose with him in pictures in the Reporter photo shoot.

He is part of a queer polycule.

The recent phenomenon of celebrities giving quotes along the lines of, "My sexuality? Well, let's just say I'm not 100 percent straight if you know what I mean," and then promptly landing a spot on the Out 100, being handing a trophy by the HRC, and then landing a part as a struggling gay teen in a buzzy Sundance movie, has caused some amount of frustration within the queer community. Miller originally came out as queer in 2012, and to his credit he's continued to openly discuss both his identity and his experiences.

In Playboy, he reveals his relationship status as being part of a "polycule" (a "polyamorous molecule" if you will) that includes a number of people (including his bandmates).

“I’m trying to find queer beings who understand me as a queer being off the bat, who I make almost a familial connection with, and I feel like I’m married to them 25 lifetimes ago from the moment we meet,” he says. “And then they are in the squad—the polycule. And I know they’re going to love everyone else in the polycule because we’re in the polycule, and we love each other so much.”


Ezra Miller at the premiere of City Island in New York, March 2010.

He's had his own #MeToo moment.

Miller opened up to the Reporter about an incident when he was an underaged actor, when a director got him alone and tried to make a move on him. "They gave me wine and I was underaged," he said. "They were like, 'Hey, want to be in our movie about gay revolution?' And I was like, 'No, you guys are monsters.'"

Crying often happens in Ezra Miller interviews and it's fine.

With Playboy, it was the interviewer who ended up crying. “No. I feel you, baby. I’m crying, too," Miller says. “A journalist who can cry when something hits their heart is the one I would like to read the article of, personally.”

Joints also often happen in his interviews and it's also fine.

The Reporter describes the actor as smoking a "spliff," while Playboy describes his weed as a "meticulously rolled" and "impressive" joint. GQ Style describes the appearance of "what appears to be a joint."

He thinks being famous is beautiful, but also likely a sign of mental illness.

To GQ Style, he describes fame as like a "beautiful" journey of paddling through a misty river in a boat with a bag full on sandwiches to a magic lake. In the Reporter, though, he says being famous might be a sign of mental illness. "We're all probably mentally ill," he says. "I watch television or the news and I'm like, 'Oh, it's my people. Were all mentally ill together. Cool.'"


Ezra Miller at the premiere of City Island in New York, March 2010.