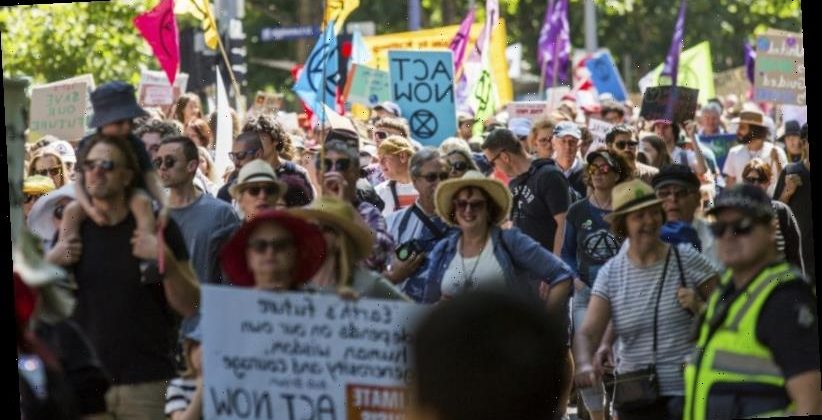 There is a single emotion common to every climate discussion in Australia. It is not the sandbag of despair, or a sparkle of hope. It is the raw, unfiltered exasperation that comes from decades of inaction.

From the first climate negotiations in the late 1990s to the Paris climate agreement updates wrangled this year and last, Australia’s Liberal-National Coalition has mostly been in government. It has mostly used that position to ensure fossil industries have the leeway to grow unhindered by responsibility for greenhouse gases discharged into our biosphere.

The people who dig up, transport, sell and burn fossil fuels are the proud beneficiaries of this subsidy-through-omission. An aggressive union of vested interests has created a haven for those who want to profit from an industry incompatible with human life. 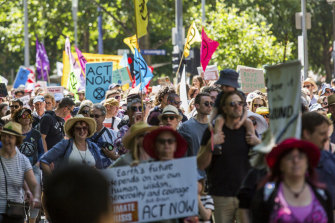 Citizen activists: there has been a wave of climate change protests across the country.Credit:Paul Jeffers

“The resulting decades of inaction have eliminated our options for a gradual response,” Ian Dunlop and David Spratt, co-authors of Climate Reality Check 2020, wrote in The Canberra Times. “The fact is that 10 per cent of the world’s population is responsible for half of the world’s carbon pollution, and Australia is firmly embedded in that 10 per cent. We have known about this inequity for three decades and done nothing to correct it.”

This is a deeply preventable catastrophe. Non-harmful alternatives to fossil fuels exist at a mature technological stage to eradicate the majority of Australia’s emissions, yet action has stalled. Inaction is common around the world, but Australia punches far above its weight in worsening the cause instead of enabling the solutions.

There is nothing stopping politically conservative parties from acting on climate. In Britain, the Conservative government has overseen a program of transformation, establishing clear, science-based five-year carbon budgets and attempting to shift the economy towards non-harmful alternatives to fossil fuels. The country’s coal-fired power output has become a blip in annual totals. Germany’s conservative-led government, too, scraped in under its 2020 climate targets (albeit with help from the pandemic). Both are far from perfect or sufficient, but their shifts are injecting momentum into Europe’s broader, accelerating decarbonisation journey.

In terms of policy substance, Australia’s conservative leadership has only moved backwards since the days of Tony Abbott. The marketing may have changed but the only systemic, long-running downward force on Australia’s emissions right now is the renewable energy industry, catalysed by the Renewable Energy Target of the ALP.

That target froze in 2020 (it would have been higher, had conservatives not fought aggressively to cut it in 2015), which means rising transport, gas mining and industrial emissions will all result in climbing totals.

Scott Morrison has expressed a “preference” to reach net zero by 2050. Yet we know exactly what someone with a preference to hit that goal would be doing in 2021.

They would be planning the closure of all coal power stations by 2030. They would be urgently commencing the transition from fossil-fuel cars to clean cars. They would be aggressively implementing energy efficiency schemes. They would be figuring out ways to simultaneously wind down and decarbonise fossil fuel extraction, itself responsible for a sizeable chunk of Australia’s emissions (while protecting communities and workers reliant on the industry).

Hitting a 2050 target means doing the bulk of the heavy lifting prior to 2030, with a two-decade tail for the “hard to decarbonise” sectors. But power, transport, households and mining remain mostly untouched by the government’s policies.

Morrison and his Energy and Emissions Reductions Minister, Angus Taylor, are not doing these things. Their flagship climate policy is a lengthy, wonky technological document aimed at incentivising fossil gas, carbon capture, hydrogen and energy storage. It is one-hundredth of a complete policy.

What are the chances of an about-face before the 26th Conference of Parties meeting in Glasgow this November? Morrison may announce a 2050 net zero target, but it won’t result in any real change to what happens in 2021 or 2022.

The exasperation that inaction brings is often followed by a question: is there anything that can be done? The democratic process of lobbying for change in federal policy can’t ever cease but the past three decades suggest that, in parallel, a bottom-up drumbeat of change must be maximised. This means realising a near-term future in which citizens, industry and communities pick up the slack and end up in the history books as the visionaries and leaders who took the reins from those who dropped them long ago.

Give the people what they want

The deepest well of currently unrealised decarbonisation potential in Australia is citizen participation. This isn’t just changing your light bulbs and walking to the shops. This is climate action on a notable scale, enacted through people, communities and organisations.

A simple example has been the growth of rooftop solar photovoltaic panels in Australia. Australia is easily a world leader in rooftop PV deployment, both in per capita terms and as a proportion of total electricity generation. In 2020, solar out-generated wind power for the first time ever, generating 19.7 terawatt-hours on Australia’s National Electricity Market (9.7 per cent of total). Thirteen terawatt-hours of that was rooftop solar. That’s 40 per cent of the total energy output of Australia’s brown coal fleet in 2020.

Consider what happened here. Several million people collectively decided to transform their homes into a distributed modular power station fuelled directly by the organic fusion reactor at the centre of our solar system. And though this change was seeded through federal (during Labor’s brief tenure) and state government schemes, Australia’s solar prowess has proven resilient both to the fading of those subsidies and even the onset of a global pandemic.

Plenty more change will be needed if Australia is to hit decarbonisation goals aligned with the Paris climate agreement. One recent estimate by Climate Analytics suggests the grid needs to be near zero carbon by 2030. Australia went from around 10 per cent renewable to 26 per cent over the past 20 years. It needs to go from 26 per cent to 97 per cent in the next nine. That means more than just wind and solar.

Much of this infrastructure will be large-scale. “Investing in transmission and in particular, strengthening the interconnection between different states will be vital in reaching a highly renewable grid,” says Petkovic. “Large infrastructure projects like this tend to move quite slowly. We anticipate that many of these projects will need to be fast-tracked to keep pace with coal closures and the transition to clean energy.”

The massive infrastructure changes required could be boosted significantly by expanding the power of citizen participation. Helen Haines, the independent MP for Indi, has highlighted this in her community energy plan for regional Australia – in which “everyday people develop, build or benefit from an energy project like a solar installation, a wind farm or a large battery”. In welcome news, the much-maligned but inarguably helpful Office of the National Wind Farm Commissioner is being expanded to batteries and new transmission lines, which should ease development issues for both. 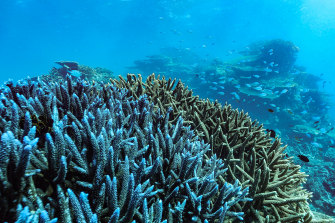 Australia already has successful community involvement in large-scale renewable projects like the Sapphire Wind Farm and the Solarshare project. But community batteries are a growing option too. Somewhere between household storage and Tesla’s shiny “big batteries”, community-scale systems can serve to link people directly with the energy transition without the requirement of personal wealth or home ownership.

The impact of community participation and ownership in energy cannot be underestimated. Denmark, a world leader in use of wind power in its grid, mandated community ownership. Germany, second only to the offshore wind-blessed Britain among the top 40 consuming countries, also leans heavily into community-owned wind.

Converting energy systems to zero-carbon options brings benefits far beyond emissions reductions. Cleaner air, cheaper energy and newer technology are all benefits that can flow to those near Australia’s new power generation systems, and well beyond those with rooftop space to spare.

Power beyond the grid

While Australia’s electricity grid is the most pressing first step on climate action, many other sectors must also be decarbonised. Transport, homes, industry, agriculture and – perhaps most significantly – Australia’s export of fossil fuels to other countries.

While public pressure, personal choice and corporate decision-making can accelerate change on domestic emissions, it is fossil fuel exports that remains the most challenging area. When the fossil fuel products extracted in Australia and sold overseas are burned, the consequent emissions far outweigh those from fuels burned within Australia. It is odd how controversial it is to talk about emissions caused by the fossil products sold by Australia, but none of the protestations change the raw physicality of the harm to human life.

If there is little appetite to tackle domestic emissions within Australia’s government, there is outright hostility from both major parties to reducing fossil fuel exports. It is another component of Australia’s emissions that must be dealt with by citizens.

In March this year, a group of teenagers sued the Australian government for approving the expansion of a coal mine, on the grounds that it provides a product that damages the future health of young Australians. The emissions associated with the coal extracted from that expanded mine will easily wipe out the emissions avoided by all of Australia’s renewable energy over the past decade.

Young Australians have been badly marginalised in the debate, not just from federal policy but within many mainstream venues for national discourse on climate and energy.

“When it comes to climate justice, stopping the mine is part of that. We here in Australia may not be feeling the effects of climate change as much as those in Third World countries are, and they will continue to be the most affected,” says Bella Burgemeister, one of the eight young activists engaging in that legal action. “When considering this coal mine we have to consider those around the world who will feel the effects first and worst.” 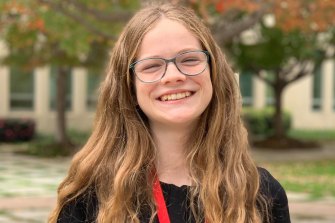 Bella hits on the heart of the problem, when talking about what a better future might look like: a future “where children don’t have to march on the street or take our government to court, where our leaders just act like leaders and we can just act like kids”. To pick up the slack of stagnant leaders is exhausting, and is robbing young activists of both the future and the present.

What the actions of these young Australians signify is a move beyond the numbers and accounting of global climate agreements, and a more literal, physical approach to the problem. Every time fossil fuels are left in the ground, it can be banked as a climate win grounded in physical reality. But every coal mine expansion worsens the climate problem, no matter which spreadsheets account for that harm.

What you can do to promote clean energy

Community participation in clean infrastructure and aggressive activism on key climate issues are emerging as the lowest-hanging fruit when it comes to filling the void of federal climate action. Once the government becomes truly isolated – domestically and internationally – they may have to begrudgingly accept the need to change, perhaps on the proviso that they get to revise history and pretend they were always on board.

There remains the minuscule possibility of the government choosing to begin the big steps of decarbonisation today. It would be miraculous, but the foundation of new energy on climate action is far more likely to be found in the hearts and minds of those with the most to lose, and the most to gain.

Ketan Joshi is an author and analyst based in Oslo, Norway. His recent book Windfall: Unlocking a Fossil-Free Future (NewSouth Publishing) covers the past and next decades in Australian energy and climate.