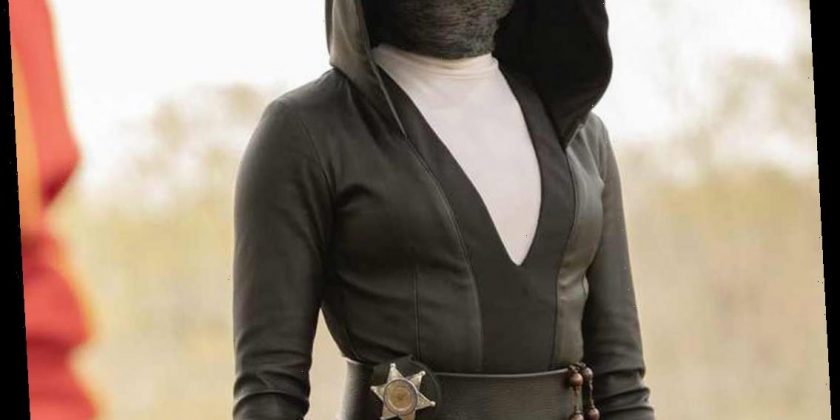 Regina King is nominated for an Emmy Award in the Outstanding Lead Actress in a Limited Series or Movie category for her work in Watchmen. Look back at many more of her amazing roles.

Regina King already has three Emmys, but she wouldn't mind adding another one to her shelf.

The 49-year-old star heads into the 2020 Emmy Awards with a nod in the Outstanding Lead Actress in a Limited Series or Movie category for her role in Watchmen. This is one of 26 nominations the HBO hit has earned this year. Her co-stars Jeremy Irons, Yahya Abdul-Mateen II, Jovan Adepo, Louis Gossett Jr. and Jean Smart are also up for awards, and the show is in the running for Outstanding Limited Series. While it's already taken home a few trophies at the 2020 Creative Arts Emmys, King and her castmates will have to wait and see if they win the gold.

For those who haven't seen Watchmen, King plays Angela Abar, a lead detective for the Tulsa Police Force in Oklahoma who also serves as the masked hero Sister Night. During an interview with E! News earlier this year, King spoke about how playing a superhero has been a dream of hers since she was a child.

"Now, here's the thing: Probably if you asked the 14-year-old me what I wanted to have played—'Do you want to play Sister Night?'—I would have thought that the name was cool, but I was not mature enough to understand that someone heroic could have that many complexities," she said at the time. "So, that's the reason why I say it was beyond what I could have ever imagined—in a positive way—because all of the things I've learned along the way from a teenager to now, I was able to employ them in some way in Angela."

Miley Cyrus Wears Her Riskiest Outfit Yet Ahead Of iHeartRadio Show

Kourtney Kardashian Reacts to Comments Over Her Addison Rae Friendship

King has been in the biz since she was a teenager and appeared on the sitcom 227. Over the years, she's captured audiences with her performances across film and TV—and she's got the Emmys, Golden Globe and Oscar to prove it.

To look back at some of her best performances, check out the gallery.

We were first introduced to Regina King in 1985 when she played the boy-crazy and booksmart Brenda Jenkins in the sitcom 227.

While her time on the screen in this iconic film was limited, King's memorable one-liners and engaging presence as Shalika undeniably served as the launchpad for her long career on the silver screen.

King co-starred with Janet Jackson and the late Tupac Shakur in this classic film directed by John Singleton that centered around each character finding themselves after individual heartbreak and tragedy.

"My whole life is this family, Jerry, and it does not work without him!"

It's the line that makes us—and Jake Gyllenhaal—cry, delivered flawlessly by King in her role as Marcee Tidwell after seeing her football player husband, Rod Tidwell (Cuba Gooding Jr.), get seriously injured during a game.

In a video interview with BuzzFeed, King shared how this role was "special" and how she thought of their on-screen romance as "the love you wanted to achieve." As she put it, "That relationship was the relationship you wished you can have."

The performer nabbed her first BET Awards nomination for her part in Down to Earth as a Sontee Jenkins, an activist who Chris Rock's character Lance Barton found so attractive, he literally died in a car accident while checking her out. But, the good news is that he was then reincarnated and got to reconnect with the protester while in his new body. It's a goofy film that showcased that King can thrive in any genre.

Who wouldn't want a fairy godmother, especially if yours is Regina King!

The actress played Rhonda in this mid-2000s take on the classic Cinderella tale, where she helps Sam (Hilary Duff) sneak off to the homecoming dance and stand up to her evil stepmother and stepsisters.

King's first major award nomination—Outstanding Performance by an Ensemble in a Motion Picture at the SAG Awards—came in part from her portrayal as Margie Hendricks in the Oscar-nominated film Ray. In the film, Margie is one of the legendary Raelettes for Ray Charles (Jamie Foxx) and becomes his on-the-road lover.

Who doesn't love a good Christmas film? In This Christmas, King played Lisa, a witty woman whose crazy family came together for a holiday dinner. With plenty of drama and secrets revealed throughout the film, it's relatable to anyone who has gone home for the holidays.

King returned to the small screen in the show Southland, a series documenting the day-to-day lives of those working at the LAPD. The actress received three BET Award nominations for her performance as Detective Lydia Adams. For instance, in one memorable scene from the first season, King fought off intruders who break into her home.

King joined the second season of the popular HBO show as Erika Murphy—the fierce matriarch of her family who lives in Jarden, a town that was unaffected by the mysterious Sudden Departure where two percent of the world's population vanished.

King starred not once, not twice but three times in the American Crime anthology series, playing a different character in each iteration of the show. Her portrayal as Aliyah Shadeed won her the first Emmy Award of her career and her performance as Terri Lacroix earned her a second trophy.

After scooping up two Emmys from her time on American Crime, King took home her third when she played Latrice Butler on the Netflix series Seven Seconds. The show surrounds a police cover-up in the death of Brenton—a Black teenager who is also Latrice's son—and Latrice's journey to finding and exposing the truth.

King's portrayal as Sharon Rivers earned her both her first Academy Award and Golden Globes Award. In her acceptance speech at the Golden Globes, King thanked director Barry Jenkins, praising both the film and her role when she said, "Thank you for your empathy, thank you for telling stories so rich and thank you for giving us a film that my son said to me, when he saw it, that it was the first time he really saw himself."

She also took her time on stage to vow that women would comprise at least 50 percent of the staff on all projects she'd produce over the next two years.

In 2019, King was cast as the lead in the highly-anticipated Watchmen series and proved to be the perfect person to play Sister Night/Angela Abar. The thrilling show, which has been praised for its stunning visuals and powerhouse acting, has plenty of twists and turns that we wouldn't want to spoil here, but it's one you don't want to miss.