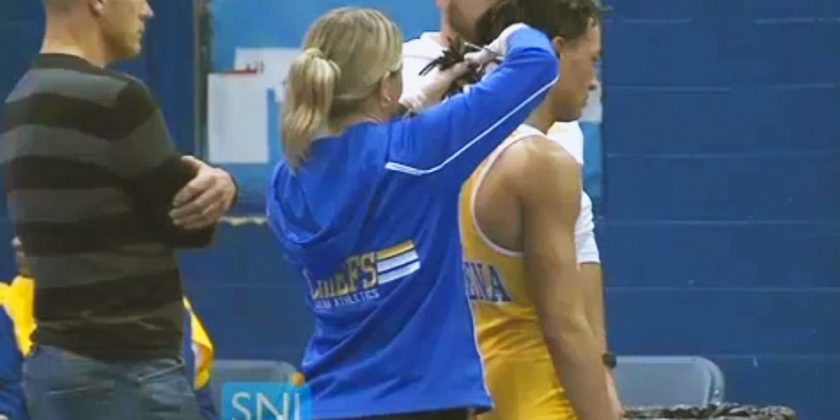 A black high school student from southern New Jersey was forced to have his dreadlocks cut off just before a wrestling match on Wednesday after a referee reprimanded him for the hair style.

Andrew Johnson was competing in the 120-lbs. division for Buena Regional High School, according to SNJ Today. When he was ready to take the floor, the referee — who TMZ reports is named Alan Maloney and is white — told the boy that he couldn’t wear dreadlocks under his cap.

He allegedly gave Johnson two options: either cut his hair or forfeit the match.

RELATED: Kitten Trapped Underneath SUV Takes the Ride of Her Life Before NYPD Officers Rescue Her

A video of the incident shows that the athlete opted for the former, and that he went on to win the match in overtime. Despite his victory, Johnson appeared visibly upset.

After the clip went viral, Mike Frankel, the SNJ Today reporter who initially documented the incident, shared on Twitter that the coaches argued with the referee for several minutes about his call. This prompted him to start the injury clock, and only then did Johnson agree to take off the cap and cut his hair.

It is unclear what the exact rules were regarding grooming for high school wrestlers at that competition. But if the hairstyle was not permitted, officials would likely have informed Johnson and his coaches at the beginning of the season, according to Yahoo Sports.

In addition, the National Federation of State High School Associations, which writes the rules for most high school sports in the U.S., states that “braided hair that is non-abrasive” only needs to be “contained in a legal hair cover” if it’s longer than rules allow.

According to an October 2016 report from a South Jersey newspaper, the Courier Post, Maloney may have a history of racist behavior.

The outlet alleges that in March that year, he called a fellow referee, Preston Hamilton, who is black, the N-word during a small gathering of a group of officials. Maloney and Hamilton worked together at a youth tournament in Wildwood earlier that day.

Hamilton told the paper that Maloney poked him in the chest while saying the epithet and, in response, Hamilton slammed him to the ground. Maloney told the outlet that while he doesn’t remember the incident — there was alcohol present at the gathering — he believes the multiple eye-witness accounts.

The New Jersey Wrestling Officials Association later ruled that it didn’t have the authority to fire Maloney over what happened. Its president, Guy Siraki, said in a statement at the time: “We’re going to move forward from here and hopefully this thing has been resolved in the back of a lot of people’s minds.”

According to the Post, Maloney volunteered to pay for and participate in both an alcohol awareness and sensitivity training programs as punishment.

Maloney did not respond to PEOPLE’s request for comment.