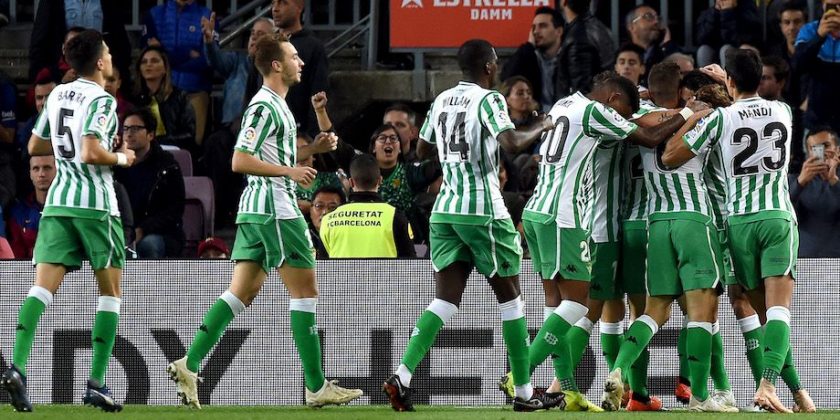 Mid-table La Liga side Real Betis take a 1-0 lead into their match against lower-division Racing Santander.

One week after securing their place the UEFA Europa League Round of 32, as Sky Sports reported, 11th-place La Liga side Real Betis will try to advance to the Round of 16 in Spain’s Copa del Rey competition when they host lower-division club Racing Santander on Thursday. The game will live stream from Seville.

To find out how to watch a live stream of the Real Betis vs. Racing Santander Spanish Copa del Rey second-leg Round of 32 match, see the streaming information at the bottom of this article. Kickoff is set for 8:45 p.m. Central European Time on Thursday, December 6, at the 60,700-seat Estadio Benito Villamarín in Seville, Spain. In the United Kingdom, kickoff takes place at 7:45 p.m., while in the United States, the match will start streaming at 2:45 p.m. Eastern Standard Time, 11:45 a.m. Pacific. Fans in India can log in to the live stream at 1:15 a.m. India Standard Time on Friday morning, December 7.

In the first leg — on November 1 in Cantabria — Real Betis made a penalty-kick goal scored by striker Sergio León in the eighth minute stand up the rest of the way, per Sky, to take a 1-0 lead back to the Benito Villamarín for Thursday’s match.

Betis come into the game having won four of their last seven matches across three competitions, but face a Racing side that tops the table in their lower league with six points clear, per Soccerway. Racing will be looking to claim a victory against a Betis squad on which León — who has played in only five league games — again will be relied upon to provide the scoring. However, the first-leg penalty was the striker’s only goal of the season — in any competition so far.

However, there is a way for fans to watch the Copa Del Rey match stream live for free, without a cable subscription. Prospective viewers can sign up for a free trial of a streaming TV multi-channel package — such as the Sling TV international sports package, or Fubo TV. Both services require credit card information and subscription fees, but each offers a seven-day free trial. If the subscription is canceled prior to the expiration of that week-long period, fans can watch the “Los Verdiblancos” vs. “Los Verdiblancos” (yes, both teams traditionally wear green and white) match live stream for free.

In Spain, MoviStar+ will stream the Thursday Copa del Rey tournament match. In the United Kingdom and in India, there will be no live stream offered. But fans can likely access the live stream through another provider listed here by using a VPN service, such as those recommended by CNet.

For a comprehensive list of outlets in other areas of the world that may carry a live stream of Real Betis vs. Real Racing Club Santander, check out the listings at LiveSoccerTV.com.